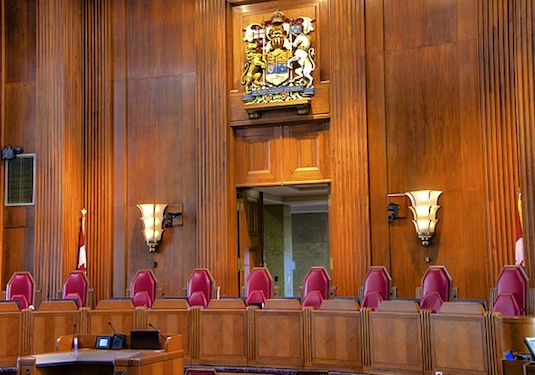 With its decision yesterday to re-approve the Trans Mountain pipeline expansion, the Trudeau government could find itself face to face with a constitutional challenge filed by a leading environmental lawyer—on the urging of his 13-year-old daughter, a school climate strike veteran in Esquimalt, British Columbia.

“I begged dad for about half a year to take this to court,” Rebecca Wolf Gage told Vice News last week.

Wolf Gage’s dad, Andrew Gage, is staff lawyer at West Coast Environmental Law, and has been at the centre of the campaign [2] encouraging B.C. municipalities to send climate accountability letters asking colossal fossils to cover their share of the climate impact costs the cities face.

In December, fed up with inaction on the part of adults as she watched forest fires engulf the suddenly dry rainforests around her home on Vancouver Island, Wolf Gage “joined thousands of teenagers across Canada in organizing school walkouts every Friday to push for more government action on climate change,” Vice writes. So she was thrilled when her dad said, “hey, we could possibly sue the government,” for going ahead with a pipeline expansion that will “triple the amount of oil flowing through an existing pipeline, from 300,000 barrels of oil a day to 890,000.”

While they have yet to file a court action, the Gages, along with other lawyers and climate strikers across Canada, “sent a letter to cabinet warning that the government could be in violation of the Charter by proceeding with the pipeline expansion without considering its climate impacts.”

Underpinning the prospective plaintiffs’ claim is the fact that the Trudeau government now owns Trans Mountain, after squandering C$4.5 billion in taxpayers’ money to buy it from the corporate descendent of the disgraced Enron empire in Houston.

Specifically, they assert that the National Energy Board’s refusal (and, by extension, Canada’s failure) “to consider the pipeline’s total impact on climate change” has placed the Trudeau government in violation of Section Seven of the Charter of Rights and Freedoms, which guarantees Canadians’ rights “to life, liberty, and security of the person.” Pointing out that greenhouse gases “inevitably impact the youth disproportionately, since the climate effects of those emissions may not be felt for a decade or more,” the letter also cites Section 15, “which guarantees Canadians shall not face discrimination, including on the basis of age.”

The argument comes together around the government’s fateful decision to buy the pipeline.

“The Charter applies to anything where government action is a necessary precondition for it—that’s the legal test,” Gage explained. “You can’t say ‘we’re physically going to buy the pipeline and move this product’ and not take responsibility for the actions. This government action is enabling the burning of oil downstream by the end user, and therefore is directly responsible for it ending up in the atmosphere.”

Should their challenge proceed, the daughter-and-father team will join other court challenges, including a federal class action suit [3] launched by Quebec lawyers on behalf of people under 35, and youth-driven challenges in the United States [4].

Now that the pipeline has been approved, the adult lawyers “will talk with their teenage clients about next steps,” Vice says. One of the lawyers who signed the letter to cabinet, Patrick Canning, said they will mostly likely proceed with the Charter-centred court challenge. Gage noted, however, that the government may well “refer the matter to the Supreme Court to get a quick answer on whether they have an obligation to examine the climate impacts of the pipeline expansion.” Such a query would “yield answers more quickly than a court challenge.”

What Wolf Gage knows, with absolute clarity, is that “climate change isn’t going to get better anytime soon unless we act now. It’s going to keep getting worse.”

“Young adults are wondering even now if they should have children,” she added. “By the time I’m old enough to have kids, how messed up is it going to be? I don’t want to bring children into a world that I can’t say will be safe.”

Let’s stop calling our elected politicians our leaders, they are not that,they work for corporations that they subsidize with Taxpayers money and don’t tell us the Real Truth, which is what Psychopaths do to get their way. The other reason that they have waited so long to endorse it, is they had to hide from us the purchase of the existing pipeline, pretend to want to protect the Environment, bu using the NEB.