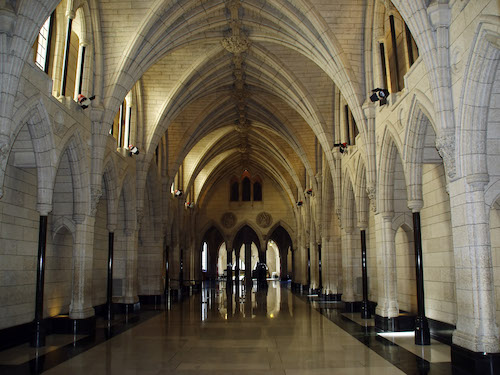 The federal government is poised to reject most of the amendments to the proposed new Impact Assessment Act, Bill C-69, put forward last month by unelected Conservative Senators following a relentless lobbying and public relations effort by the fossil industry.

“In a notice posted overnight, the government outlined its own amendments, which include many that were put forward by the Independent Senators’ Group (ISG) but virtually none of the Conservatives ones,” the Globe and Mail reports. The ISG formed [1] in March 2016 to promote a “functioning independent, non-partisan Senate”, became [2] the biggest bloc in the Red Chamber in 2017, has held a voting majority since 2018, and put forward its share of amendments after the Senate Transport Committee, led by fiercely partisan Chair David Tkachuk (C, SK), spent [3] more than a year dissecting and essentially campaigning against C-69.

In the House of Commons, “Environment and Climate Change Minister Catherine McKenna is expected to kick off debate on the highly contentious legislation Wednesday afternoon, followed by a vote in the House of Commons where the Liberals hold a majority,” the Globe states. “The amended bill would then be returned for consideration by the Senate, which is dominated by the ISG.”

The fossil lobby and its political allies have claimed C-69 would prevent any new pipeline or major resource project from ever being built. Yesterday, Prime Minister Justin Trudeau called [5] six Conservative premiers “absolutely responsible” for threatening to tear Canada apart over C-69, after their open letter claiming national unity would be at stake unless the government accepted all 187 amendments to the bill. Less fevered analysis has suggested [6] the legislation would deliver more timely, credible project decisions — and that diluting it would trigger [7] a flood of litigation, just like the Harper-era deregulation that C-69 was meant to at least partially correct.

Now, “the Liberal government has rejected calls by industry and several premiers to adopt a series of Conservative amendments because they would have seriously weakened the bill,” the Globe reports. “Those amendments would limit public participation in hearings; put industry-specific regulatory bodies in charge of reviews; and eliminate a requirement that panels must consider climate change and Indigenous rights when reviewing major resource projects.”

The government “has accepted amendments that would rein in the minister of environment’s discretion to intervene in a hearing process; clarify that the review agency has the power to manage public participation in order to meet strict timelines; and add explicit language that the goal of the project assessments is to ensure economic development along with sustainability.”

Trudeau told the House the government is happy to accept amendments that make the bill better. “What we will not do is accept the premiers’ saying ‘There is a threat to national unity if we don’t get our way,’” he said yesterday. “That is not the way to hold this country together.”

Alberta Premier Jason Kenney, who made C-69 a flashpoint in his deeply divisive but decisively successful election campaign in April, claimed the premiers had penned their letter in the best interests of co-operative federalism. “We only asked to be heard, and this dismissive response from the federal government is the real threat to the national economy and to national unity,” he tweeted.

#1 Pingback By Liberal to Reject Most Senate Amendments to Impact Assessment Act – Enjeux énergies et environnement On June 12, 2019 @ 9:52 AM

It would be nice to read some details about the proposed amendments.

As they say, “the Devil is in the details”! !
Such a simple statement as: “clarify that the review agency has the power to manage public participation in order to meet strict timelines; and add explicit language that the goal of the project assessments is to ensure economic development along with sustainability.” seems to me a re-iteration of the status quo. The NEB already has the power to MANAGE public input ….. and ENSURING economic development really means a project will certainly go forward. In our growth and money- obsessed system, SUSTAINABILITY can mean anything you want it to. And “along with” is a pretty weak term compared to “ensure”!
Same old, same old language game played by our rosy-cheeked PM.

Ruth, that was my reaction as well, with two thoughts.
First, that the government seems intent on protecting the core of the bill, even if they’re prepared to give up some of the important details in the horse-trading…which means it’s a win, even if it’s not a clean win.
And second, if the goal is to ensure economic development, I wonder how long it’ll take for intervenors to establish that real economic development is *impeded* by fossil development…that Simon Fraser’s Burnaby campus, for example, won’t be delivering much economic benefit to the surrounding community, much less graduates for the next 35 to 50 years, if it’s obliterated by a tank farm fire. That’s not to say the NEB as we’ve ever known it would be set up to consider that line of reasoning. But if some future regulator could be persuaded to — or forced into it by a court decision or by horrific events on the ground — the economic development argument could actually become one of the tools in *our* toolbox, which it should always have been.