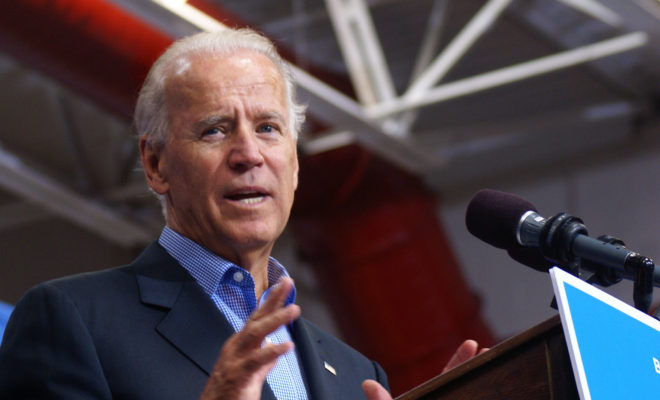 Former U.S. vice president Joe Biden, currently the frontrunner for his party’s 2020 presidential nomination, is pushing back on concerns that he favours a middle-of-the-road response [1] to the climate crisis, with the release Tuesday of a 10-year, US$5-trillion plan aimed at hitting net-zero greenhouse gas emissions by 2050.

And while this aspect of his announcement fell off the radar in much of the immediate news coverage, Biden also became the 17th of 22 Democratic candidates to pledge not to knowingly accept campaign donations from fossil interests, Grist reports [2]. In 2008, Democratic nominee Barack Obama received $1 million from oil and gas.

“Biden foresees $1.7 trillion in spending over the next 10 years, and $3.3 trillion in investments by the private sector and state and local governments,” InsideClimate News reports. “That’s about on par with the size of the $5-trillion climate plan of former U.S. Rep. Beto O’Rourke of Texas, who was the first of the Democratic presidential contenders with a detailed climate plan. Both Biden’s and O’Rourke’s plans are about half the size of  [Washington State Gov. Jay] Inslee [4]‘s proposed $3 trillion in federal spending and $6 trillion in private spending over the next decade.”

The net-zero carbon pledge is “in line with what mainstream scientists currently say must be the global target,” InsideClimate adds. “In embracing it, [Biden] proclaimed his support for the central principles, if not all the thorny particulars, of the Green New Deal,” the climate and environmental justice plan released [5] earlier this year by Rep. Alexandria Ocasio-Cortez (D, NY) and Sen. Ed Markey (D, MA).

“The sweeping proposal from the typically moderate Mr. Biden demonstrates just how far the Democratic field has moved on climate change,” the New York Times states [6]. His release “came just hours before a rival candidate, Senator Elizabeth Warren of Massachusetts, released her own climate proposal as part of a $2-trillion green manufacturing plan. Her plan would create a National Institutes of Clean Energy and push federal spending toward American-made renewable energy technology.”

Casting her plan as “economic patriotism”, Warren focused her announcement Tuesday on job creation through a cabinet-level department of economic development, the Times reports [7]. “The bottom line is—if they can make a nickel by sending your job somewhere else, they’ll do it,” Warren told an audience at a job training centre in northwest Detroit. “I’ll tell you, these corporations may not fight for American workers, but I’m willing to do it.”

She said investing in climate change would revive American economies, adding that “we need to be all in to fight this climate crisis”.

Both platforms may be emerging evidence that “climate intensity [8]” is set to sweep public opinion leading up to the United States’ crucial 2020 vote, as it is in other countries. “Democratic pollsters say that in surveys and focus groups, climate change often emerges as the second-most important issue to the party’s primary voters, following health care—a departure from previous presidential campaign cycles when the environment was sometimes an afterthought,” the Times states.

“Climate change is an incredibly important issue for the Democratic base right now,” said Democratic pollster Nick Gourevitch, who told the Times he was unaffiliated with any of the primary campaigns. “It’s about the future, and it’s something that this president [Trump] has made worse in the minds of the Democratic base.”

In the immediate aftermath of Biden’s announcement, there was hope his embrace of the no-fossil-funding pledge could signal a new fundraising standard for Democrats, Grist states. “Biden, as the current frontrunner in the polls, clearly would attract some big money donors,” said David Turnbull, strategic communications director at Oil Change USA, which has orchestrated the no-fossil pledge. “So him taking the pledge is a recognition that the power of the climate movement and the wishes of the Democratic electorate may be growing stronger than the lure of fossil fuel cash.”

Tiernan Sittenfeld, senior vice president for government affairs for the League of Conservation Voters, called the 22-page policy paper a “strong plan” with “ambitious goals” that builds on Biden’s “longtime commitment to a clean energy economy.”

“Biden’s new stance appeared designed to assuage critics who feared, based on early trial balloons, that he planned to stick to the middle of the road on climate policy,” InsideClimate states. Travelling beyond that road meant navigating three challenges: “to inherit the legacy of Obama without playing a figure from the past; to satisfy a highly active and insistent base of primary voters, especially a fickle youth movement, without losing ground to his closest runner-up, Bernie Sanders; and to maintain momentum in Rust Belt swing states from Pennsylvania to Michigan, where Donald Trump’s fossil-fuel-friendly campaign found success over Hillary Clinton in 2016.”

While the plan stops short of endorsing some of the more contentious elements of the Green New Deal, Biden sees it as “a crucial framework for meeting the climate challenges we face,” said his campaign’s online summary of the plan. “Our environment and our economy are completely and totally connected.”

InsideClimate has a comparison of the climate plans released by Democratic nomination candidates to date.

#1 Pingback By Beer: Climate Intensity Has Arrived, and Politicians Ignore It At Their Peril – Enjeux énergies et environnement On August 4, 2019 @ 10:30 PM

[…] the current frontrunner among 22 candidates for U.S. Democrats’ 2020 presidential nomination, abandoned the middle of the road, adopted an ambitious climate action plan, and promised not to accept […]