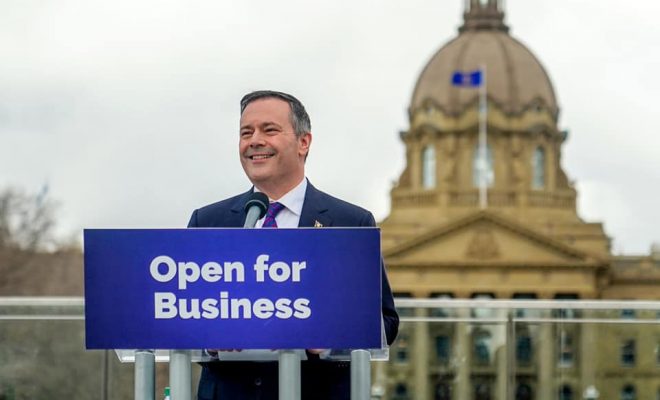 “While we remain concerned about the overall spirit of Bill C-69, we believe that with the inclusion of all these amendments, that the bill would be acceptable to the interests of Albertans,” states the letter, addressed to Prime Minister Justin Trudeau and Sen. Peter Harder, the government’s Senate representative, and obtained by CBC News.

“We call upon the entire Senate to likewise respect the deliberations of the standing committee…and vote in favour of the entirety of this amendment package,” the leaders wrote.

The amendments, some of them contradictory and  many of them crafted by fossil lobbyists, were the culmination of a concerted effort [2] by the industry and its allies to defeat the bill in its original form. The letter also asked Harder to accept a committee vote earlier this month that defeated Bill C-48, enacting the federal government’s promised ban on tanker traffic along British Columbia’s northern coast.

“The letter signals a tonal shift for Alberta’s leaders,” CBC notes. “Kenney has long called for the Senate to kill the bill outright, while Notley described the Liberal proposals as a ‘stampede of stupid’.” Harder drew a distinction between the two bills, telling CBC the full Senate should adopt the C-69 amendments as a package, then let the elected House of Commons decide which changes it wanted to accept.

“Where we’re at now, after the Senate committee deliberations, is a large number of amendments, some of which are not necessarily in harmony with others,” he said. “My view is it would be best for us, as a Senate, to act reasonably quickly and send the bill back to the House of Commons for the government to put forward which of the amendments it would agree to. And then that would come back to the Senate.”

On C-48, by contrast, he said the Senate should respect a campaign promise by the elected government. “We are a revising chamber, not a defeating chamber,” he told CBC.

Environment groups scorched the Senate Energy Committee’s revisions to C-69, The Mix reported at the time. Ecojustice lawyer Joshua Ginsburg said [3] the changes “would completely defeat the purpose of the bill,” adding that it’s “unprecedented” for a Senate committee to propose so many amendments that run counter to a government’s intent.

“I doubt you will find any other piece of legislation to which a Senate committee made 187 amendments,” he added. “That’s a complete rewriting, not a sober second thought.”