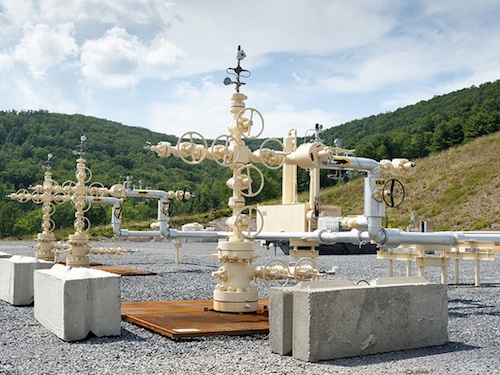 Although pressure is building on the fossil industry to address fugitive emissions from abandoned oil and gas wells, deadbeat drillers and insufficient public funds for cleanup mean Pennsylvania landowners who once played host to oil and gas extraction remain captive to all that was left behind.

While orphan wells have emerged as a tough [1], legally contentious [2] issue in Alberta [3] and British Columbia [4], they’re a much more established problem in Pennsylvania, where the United States’ first well was drilled in 1859, E&E News reports. Today, the state is “home to between 200,000 and 750,000 so-called orphan wells that have been abandoned and that have no apparent owner.” Taken together, these wells “emit 40,000 to 70,000 tonnes of methane a year, between 5% and 8% of the state’s human-caused methane emissions.”

Ohio and West Virginia largely share the remainder of what may be “as many as three million orphan wells” across the United States.

That the drilling industry once escaped all responsibility for the wells it left behind owes to a near-century of virtually zero regulation, E&E states. Pennsylvania did not even “require drillers to post a cleanup bond until the 1980s.”

And while bond rates were raised in response to the shale drilling boom in 2012, “the amounts aren’t nearly enough to cover the cost” of plugging an abandoned well.

Shale well owners are now required to put up a $US10,000 bond per well, or “a blanket bond amount [of] $US600,000 for 150 or more wells,” but those monies hardly count towards the full cost of plugging a well. E&E reports on the recent experience of Pennsylvanian Charlie Brethauer who was able to plug an orphan well on his property—thanks to a US$125,000 grant from a state-run entity called the Commonwealth Financing Authority (CFA), which collects bonds from drillers and directs the proceeds towards plugging the wells that will all too soon be abandoned [6].

But Brethauer was lucky. While “for the most part, the states are in charge of preventing pollution from those wells,” reports E&E, most of them “don’t have enough funds to clean up the legacy wells left from the oil industry’s first century, and most aren’t ready to clean up the tens of thousands of wells drilled during the first decades of the shale drilling boom.”

Pennsylvania’s Department of Environmental Protection “has about $400,000 a year to spend on well plugging,” in addition to funds collected via the CFA. “At the current rate of 10 to 12 wells a year, it would take 17,500 years to work through the state’s backlog,” said Scott Perry, head of the DEP’s oil and gas division.

Things are no better on the other frontiers of America’s much-lauded oil and gas boom. The Texas Railroad Commission “spent $23.4 million to plug about 1,200 orphan wells in fiscal 2018,” reports E&E. But that amount was insufficient “to keep up with the number of wells that were abandoned by their operators, so the state’s orphan well population increased from 5,687 to 6,285 during the fiscal year.”

Beleaguered states are beginning to pay attention, however. Colorado has “ordered the state Oil and Gas Conservation Commission to overhaul its bonding requirements as part of a broad rewrite of energy regulations,” and Ohio “voted last year to roughly double the amount of oil and gas production taxes the state spends on well plugging.”

And while Pennsylvania’s legislators have yet to address the lack of funding, the DEP “has become more aggressive about overseeing transfers of old oil and gas wells, to prevent those wells from being handed off to companies that can’t afford to plug them.”

It’s also working with Diversified Oil and Gas, an Alabama company that bought thousands of the state’s older shale wells from some of its biggest producers. Diversified has put up a $7-million bond, on a promise to plug 1,400 wells within the next 15 years.