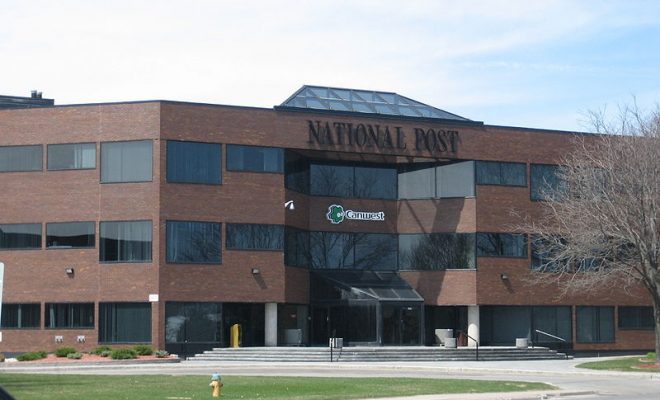 Canada’s biggest newspaper chain is hoping to make money by offering content services to the C$30-million fossil “war room” Alberta Premier Jason Kenney has vowed to set up, in what one Alberta journalism professor calls a “complete abrogation of the societal mandate that Postmedia should be upholding.”

Alberta lobbyist records reported Friday by The Narwhal, National Observer, and CBC show Postmedia hiring Kenney’s former campaign director, Nick Koolsbergen, to “discuss ways Postmedia could be involved in the government’s energy war room.” Postmedia publishes the National Post, the Edmonton Journal, the Edmonton Sun, the Calgary Herald, the Calgary Sun, the Vancouver Sun, the Province, the Ottawa Citizen, and the Ottawa Sun, among other local dailies, and The Narwhal says it also owns papers in at least 34 Alberta communities.

“Koolsbergen has deep political roots, having taken on the role of chief of staff for the United Conservative Party in October 2017,” The Narwhal reports, after a brief stint in that capacity with former B.C. premier Christy Clark. “He remained with the [UCP], as campaign director, during the most recent election campaign.” After that, he tweeted that he had formed Wellington Advocacy to work in “government relations” and “help companies and candidates win high stakes campaigns.”

Postmedia Vice President of Communications Phyllise Gelfand said the company had “engaged Wellington Advocacy with respect to the commercial content area of the business and the previously announced Alberta government’s energy war room.” CBC notes [2] that “the organization’s Content Works division, which is separate from its news division, does content marketing, branded content, and native advertising for corporate clients.”

But Mount Royal University journalism professor called the arrangement with Koolsbergen “disturbing”, noting that the “war room” will be a way for the Kenney government to suppress or punish free speech it doesn’t like.

“If I was to speculate about what they might be doing here, I would think that they would be discussing branded content or custom content that Postmedia could provide in the service of this war room,” he told The Narwhal. “This sort of exposes the problematic nature of that kind of business. Is it appropriate for a news media organization to be providing political custom content while at the same time reporting on politics? And how does that impact trust in that media organization?”

This is by no means the first time Postmedia has leapt across the line between independent reporting and outright advocacy. In 2015, then-Edmonton Journal editor-in-chief Margo Goodhand told [3] Canadaland the paper had been “asked to endorse” the provincial Conservative party in a missive from company headquarters in Toronto, The Narwhal notes, and all four Alberta papers at the time followed orders.

“Postmedia also reportedly told its papers to endorse the federal conservatives in 2015,” The Narwhal recalls. That revelation “prompted CBC’s Charles Rusnell to question [4] the ethics of ‘an American hedge fund telling an Alberta newspaper which federal Canadian party to endorse’.”

In 2014, meanwhile, “a presentation was leaked that detailed a partnership between Postmedia and the Canadian Association of Petroleum Producers [5],” The Narwhal continues, citing a report in Vancouver Observer. “Later that year, we revealed that Postmedia had been running editorial content paid for by the oil industry [6] without any labelling to indicate it was sponsored content.”

Those details indicate that “Postmedia has ceased to be a news media organization and has become a political organization,” Holman said. “If the major dailies are unable to do their job to hold power to account and inform the citizenry, that does not speak well for the future of democracy in Alberta.”