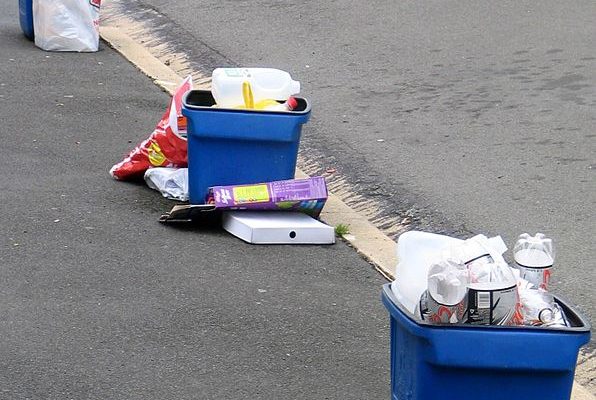 A year after China declined to continue serving as the world’s recycling bin/rubbish heap, Canadian municipalities are scrambling to figure out what to do with their blue box waste, a task made tougher by consumer habits, ill-judged petrochemical subsidies, and a tenaciously linear economy.

“For decades, Canadians tossed their recyclables into blue bins and never looked back,” writes the Globe and Mail.  And for many years, China was willing to accept, sort through, and resell all that was tossed.” Citing a 2018 study in the journal Science Advances, the Globe writes that between 1988 and 2016, “China and Hong Kong alone imported US$81 billion worth of scrap plastic.”

All that changed in 2018, however, when China, concerned about the environmental and public health impacts of a lucrative industry, but also frustrated by the contaminated state in which recyclables all too often arrived, “cut its imports of scrap plastic by 96%.”

The Globe’s analysis of international trade data shows Canada’s exports of scrap plastic dropping 20% since, while the cost of domestic recycling has shot up as much as 40%.

This is a “come-to-Jesus moment,” Jo-Anne St. Godard, executive director of the Recycling Council of Ontario, told the Globe. “We’re going to have to shine a light on those materials that we’ve been sort of hoping would get recycled but, really, at the end of the day, aren’t.”

The environmental costs of all that wishful thinking are high: “only 9% of the 3.2 million tonnes of plastic waste generated each year in Canada is recycled,” reports the Globe, with the result that “as much as 2.8 million tonnes—the weight of 24 CN Towers—ends up in Canadian landfills.”

And then there are the environmental costs of desperation. “For two consecutive winters now, Gerry Moore and his staff at Island Waste Management Corp. (IWMC) on Prince Edward Island have resorted to burning plastic bags,” explaining to the Globe that they “had no other option.” The emerging solution is PEI’s plan to ban the bags outright in July, a provincial first.

But now, the very contamination that caused China to draw the line is haunting recycling efforts at home. The constant need to stop complex machinery to remove everything from electrical cords, to teddy bears, to briefcases from blue box streams, as well as items made unrecyclable by food contaminants, makes domestic recycling a costly business.

Another problem is that the “labels and adhesives used on certain plastics—clamshells that hold berries are a prime offender—can yield a lower-quality resin that makes them harder to convert into new products,” the paper notes, tracing the volume back to a Canadian petrochemical sector that “churned out C$10 billion worth of virgin resin in 2016,” an amount far beyond the current capacity of domestic recyclers.

Even uncontaminated plastics are proving more and more difficult to offload, with plastic film (the kind used in bread bags, for example) currently fetching “-$40 a tonne.”

Adding to the quandary of a planet (especially its oceans) awash in plastic, notes the Globe, is the general acceleration toward lighter packaging, which “lowers transport-related greenhouse gas emissions.”

After 187 countries adopted last week’s Basel Convention amendment [2], aimed at limiting the flow of plastic waste to developing countries, Ottawa is on track to unveil the first phase of a zero plastics waste strategy next month, and is working to shore up support for a Group of Seven accord to get serious about clearing plastics out of the world’s oceans, the Globe states. But “neither the United States nor Japan has signed on,” and “many of the strategy’s targets—including a goal to recycle and reuse at least 55% of plastic packaging by 2030, and 100% of all plastics by 2040—are voluntary.”

As to measures that might one day be enforced, there is growing pressure to adopt extended producer responsibility (EPR) systems which require large consumer packaged goods companies to pay for and manage recycling.

“Packaging, after all, accounts for one-third of the Canadian plastics market,” writes the Globe. So “the theory is that Unilever (which manufactures a broad range of food and personal care products), Walmart, and others are more likely to design recyclable products when they are the ones on the hook for disposal costs.”

B.C. has already adopted an EPR system, while “Calgary and Edmonton, keen to unburden strained municipal tax bases at an economically rocky time for Alberta, are now pushing the province” to follow suit.

And Ontario Environment Minister Rod Phillips told the Globe his province is pushing ahead to implement its own EPR system. “It just makes sense [for] the people producing the waste to be accountable for it,” Phillips said.

Meanwhile, “environmental groups such as Greenpeace have called for outright bans on single-use plastics while pushing for national standards around packaging and recycling.”

But while “lawmakers in the European Union voted in March to ban single-use plastic items such as straws, cutlery, cotton swabs, and Styrofoam containers by 2021,” Canada is dragging its feet, going so far as join the U.S. and Japan in protesting China’s import restriction at the World Trade Organization.

Even so, federal Environment and Climate Minister Catherine McKenna casts China’s action as “a wake-up call that points to a need for better waste management systems,” reports the Globe, citing an interview where she acknowledged that “we can’t just be shipping our recycling to other countries.”

The Globe also points to a bigger problem in the way Canada does business, noting that the country’s resin-producing petrochemical industry was “showered” with subsidies by the former Alberta government. Such largesse, notes the Globe, “highlight[s] what critics say is a fundamental problem in waste management: the taxpayer-funded underwriting of new plastic creation in an era when governments are scrambling to find ways to recycle plastic.”

“The real challenge,” said Usman Valiante, designer of B.C.’s recycling system, “is to move away from a linear economy that endlessly consumes resources, toward a circular system that reuses them.”