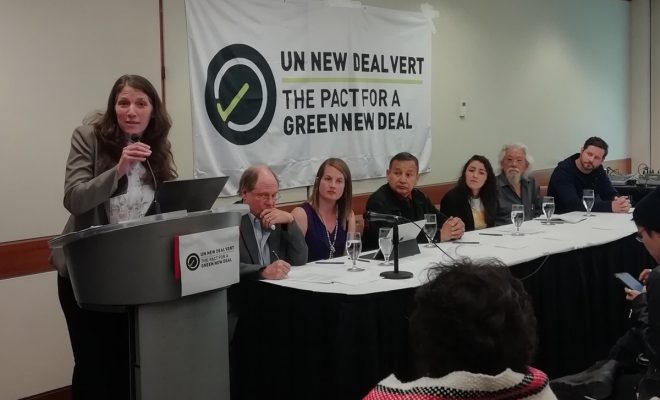 With national elections in Canada just 5½ months away, three different coalitions are out with non-partisan campaign platforms aimed at propelling all the federal parties toward faster, more ambitious action on climate change.

On Monday, a wide coalition of youth, artists, workers, Indigenous peoples, scientists, faith leaders, more than 60 organizations, and 50 prominent Canadians launched [1] the Pact for a Green New Deal, a call for the country to halve its greenhouse gas emissions by 2030. Along the way, the groups are urging political leaders to “protect critical cultural and biological diversity, create a million jobs, and address the multiple crises we face through a holistic and far-reaching plan that respects the constitutionally enshrined and internationally-recognized rights of Indigenous peoples.”

On Tuesday, 14 of the country’s leading environmental organizations released [3] a joint, 20-point platform calling on parties to commit to a 1.5°C threshold for average global warming, set legislated climate targets with a baked-in accountability mechanism, conduct a full review of the Trans Mountain pipeline expansion, and place a moratorium on oil and gas exploration and development in the environmentally fragile Gulf of St. Lawrence. The statement also addresses carbon pricing, zero-emission vehicle and net zero housing targets, and a series of targets for biodiversity, healthy communities, single-use plastics, and introduction of a federal environmental bill of rights.

And in a separate initiative, Climate Strike Canada posted [4] a petition on The Action Network, setting seven conditions for any candidates who hope to earn the youth vote this fall. Those conditions include legislated emission reduction targets of 65% by 2030 and 100% by 2040, “separation of oil and state” by rejecting new fossil projects and ending fossil subsidies, a just transition for fossil work forces, commitments to an environmental bill of rights and to full implementation of the UN Declaration on the Rights of Indigenous Peoples, conservation of biodiversity, and protection of vulnerable groups—including recognition of climate displacement as a basis for refugee status,

The Pact for the Green New Deal, like the U.S. plan from which it takes its name, extends beyond the immediate climate crisis to encompass a much wider range of community issues and crises.

“In our lifetime, youth have seen both the degradation of our climate and any sense of stable livelihoods,” said student and youth organizer Niklas Agarwal. “We are the first generation in human history whose quality of life is predicted to be lower than our parents. The Green New Deal is the first sign of hope our generation has.”

He added that the Green New Deal “recognizes that climate change requires urgent action, but is also an opportunity to make our communities healthier and create a million good jobs in the process.”

In a release, the groups behind the Pact point to “record heat waves, floods, wildfires, and increasing global dislocation due to climate change,” while noting that “two billionaires control as much wealth as almost a third of the population in Canada, Indigenous nations are continually marginalized, and reported hate crimes have increased nearly 50% in 2017.”

“As a result of colonialism, our territories were stolen and ravaged, and we are still fighting for full control over what happens to our lands and waters,” said Grand Chief Stewart Phillip of the Union of B.C. Indian Chiefs. “Every single aspect of a Green New Deal must simultaneously include Indigenous peoples—at the decision-making level, the reporting level, and the implementation level.”