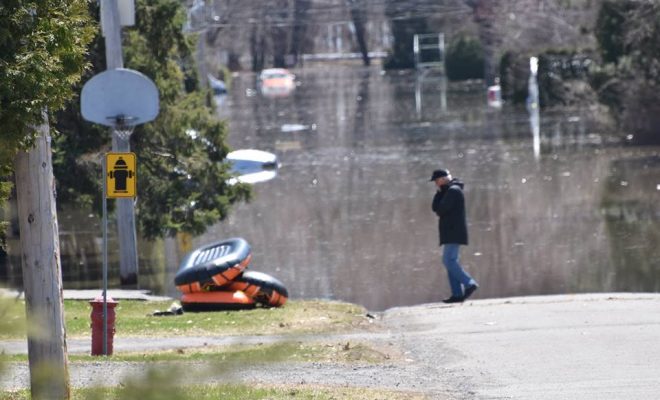 In the aftermath of last month’s catastrophic flooding in Sainte-Marthe-sur-le Lac, on the shore of Lake of Two Mountains outside Montreal, some local planners are having a ‘what were they thinking’ moment: How is it that much of the town, which more than doubled in population between 1995 and 2016, was built on a lake bed?

“Like many of the suburbs that dot Montreal’s North Shore, Sainte-Marthe-sur-le-Lac was home only to summer cottages not so long ago,” and was subject to routine flooding until a dike was built in 1980, CBC reports. After that, “with low taxes, waterfront views, and its proximity to the city, Sainte-Marthe has grown rapidly,” from 8,300 to 18,000 permanent residents in just a couple of decades.

But after the dike burst and thousands were forced from their homes—one of them returning to kayak [2] through her living room in tears—“there have been questions about a lack of government oversight and whether authorities should have acted more quickly in improving the structure,” CBC notes. “The dike was inspected after the historic flooding two years ago, and plans were in place to repair it this fall. But the disastrous breach has prompted broader concerns about how municipalities in the Montreal area have allowed their waterfronts to be developed.”

CBC points to the “lure of property taxes” as an inducement that can lead cities down an unsafe development path.

“For them, the house with the nice view of the river brings a lot of taxes. And if they want to develop a new library or whatever plan they have, they need money,” said Concordia University professor of geography, planning and environment Pascale Biron. She added that the spring rain and snowmelt have to go somewhere—which means zoning and flood mitigation decisions should be made on a watershed basis, and hence at the provincial level.

You need an overall approach,” Biron said. “If you put levees and dikes everywhere, the risk might be that water is routed faster downstream.”

Last week, Premier François Legault said the province hadn’t yet decided whether it would allow the dike to be rebuilt. “Do we have to build all of it, a part of it? It will have to be studied,” he said. “It’s not an easy process to redefine a flood zone, but I think it’s important that we do so. With what happened in 2017 and this year, it’s clear that we’re in for a new impact with what’s happening every spring.”

Martine Chatelain, spokesperson for the environmental group Eau Secours, told CBC it may be time to rethink the assumption [3] that Quebecers should live right next to water. “It’s beautiful, that’s true,” said Chatelain, who grew up on a lake in the Laurentians. “But it doesn’t always make sense.”CBC cites jurisdictions like The Netherlands [4], “where authorities have stopped building up dikes and, instead, moved them back, to allow the river to ‘breathe’ during the spring runoff.”