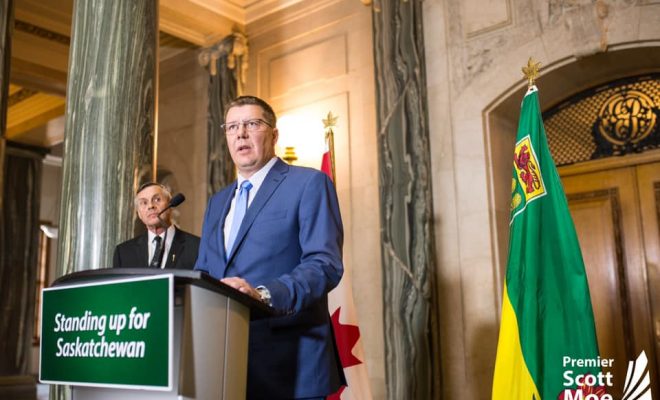 Saskatchewan Premier Scott Moe is vowing a Supreme Court appeal after his province’s Court of Appeal ruled Friday that a federal carbon tax imposed on the province is constitutional and falls within Ottawa’s authority.

With other carbon tax lawsuits still to be settled, Moe compared [1] the ruling to “game one of the playoffs”, adding that game seven would be held before the country’s highest court.

“I remain hopeful for a different outcome,” Moe said after the appeal court released its ruling. “No one in this nation should confuse climate action with a carbon tax.”

Federal Environment and Climate Change Minister Catherine McKenna said the decision “confirms that putting a price on carbon pollution and returning the revenues to Canadians through the Climate Action Incentive rebate is not only constitutional, it is an effective and essential part of any serious response to the global challenge of climate change.” She called on the Conservative premiers lined up against the tax to “stop the partisan games and join in on serious and effective climate action.”

Clean Prosperity says the court decision means Saskatchewan residents will now pay the federal backstop price on carbon, currently set at C$20 per tonne, and qualify for the federal rebate [3].

“Now that the province is legally obligated to implement Ottawa’s carbon tax and rebate program, the average Saskatchewan family (2.6 people) will receive a total of $4,061 in rebates by 2022, which leaves them $1,365 better off after factoring in the direct and indirect costs they will face from the tax,” the organization states. “Clean Prosperity applauds the court’s decision, which implements a fair, effective, and affordable policy that not only helps to fight climate change, but eases the cost burden of doing so with a rebate for families.”

“Today’s ruling affirms that climate change is an existential threat, and that all levels of government have the authority to take action,” said [4] Environmental Defence Program Director Keith Brooks. “Canada is warming at twice the rate [5] of the rest of the world and urgent action is needed. Many parts of this country are flooded and the link to climate change is very clear. The impacts of climate change will only get worse unless action is taken.”

University of Regina economist Brett Dolter said Moe’s government “must now look at how it should modify its own made-in-Saskatchewan carbon reduction plan—whether it’s similar to the federal plan, or offering rebate cheques, or moving the revenue to other sectors of government which could use the funding,” CBC states.

“The policy can be designed to ensure people don’t fall behind. That’s the message I want people to realize,” Dolter said. “We often talk about carbon pricing as if it’s just this cost—and we often forget about the money coming in that could offset this impact.”