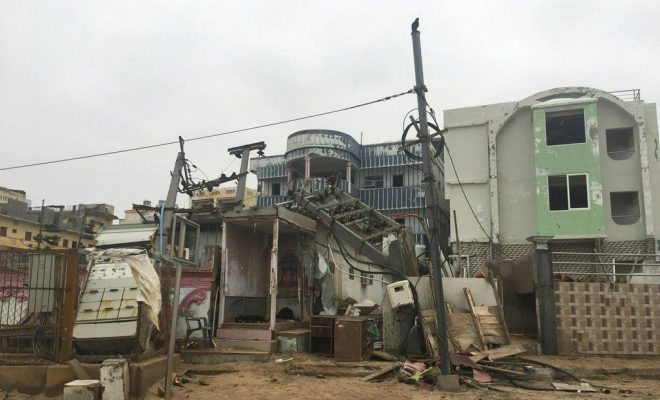 People on India’s eastern coast were counting themselves lucky over the weekend after Cyclone Fani brought winds of up to 120 miles (200 kilometres) per hour, causing massive damage but fewer than 20 reported deaths after authorities evacuated about 1.2 million people [1] in Odisha, one of the country’s poorest states.

The combined death toll in India and Bangladesh was under 30, Al Jazeera reports [2]. The New York Times says Bangladesh evacuated another million citizens who were in the storm’s path. Accuweather has video [3] of Fani’s destructive fury.

“The cyclone’s storm surge, which pushed waves deep inland, swamped entire villages,” the Times reports. After the winds subsided in the coastal city of Puri, “electricity poles made of cement and steel lay scattered on the ground, along with roofing tiles, pieces of billboard, and crumpled iron sheeting. The walls of many buildings had collapsed, leaving countless people homeless.”

And yet, “though many poor people lost everything they owned, as the skies cleared on Saturday and the sunshine returned, there was a widespread feeling that this could have been so much deadlier.” That’s because “so many precious lives had been spared. Fewer than 20 fatalities were reported, compared with the thousands killed 20 years ago, when a similar cyclone swept over the same area.”

The Times put that outcome down to authorities executing a detailed evacuation plan “that they have been perfecting ever since that disastrous storm in 1999,” in which people were moved to specially-built cyclone shelters located on higher ground.

“It was a huge, meticulously-organized lifesaving operation and, it seems, a success story for the government’s early warning system,” the paper states. “Indian officials transmitted millions of text messages, broadcast warnings over public address systems, and sent fleets of buses to scoop up vulnerable people, bringing them to hundreds of sturdy cyclone shelters that had been stocked with water and food.” The few people who died were among those who didn’t heed the warnings.

In the aftermath, many of the evacuees opted to stay in the shelters, rather than taking their chances with floods or downed electrical wires. The Times says local authorities were fine with that. “They are welcome to stay as long as they want,” said Satyajit Mohanty, a police official in the inland city of Bhubaneswar.