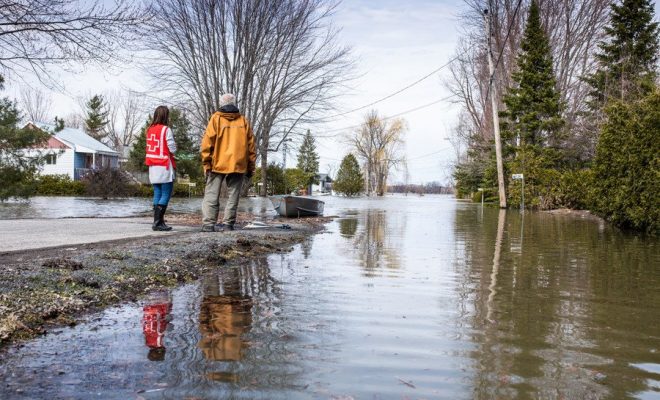 With record, devastating flooding in parts of Quebec, New Brunswick, and Ontario, thousands of people evacuated with their homes underwater, 2,000 Canadian Forces troops [1] providing assistance, and everyone from students to inmates volunteering to fill sandbags or lend a hand, experts and commentators are calling for a more serious approach to climate change preparations and adaptation.

But it remains to be seen whether the latest round of climate-fuelled natural disasters will be enough to shift the national debate on greenhouse gas reductions.

A secondary flood of news coverage chronicled Sainte-Marthe-sur-le-Lac, Quebec resident Valérie Deslauriers kayaking [3] into her living room, then bursting into tears as she surveyed the damage, and climate scientist Leehi Yona remembering [4] the startled moment in 2017 when drone footage over Pierrefonds, on the island of Montreal, showed her neighbourhood grocery store completely flooded. Two years later, she says the store still hasn’t reopened. The Pontiac region in west Quebec was under [5] mandatory evacuation order, Premier François Legault “warned it could be two weeks before most houses are out of the flood zone,” the Globe and Mail reported [6], and “Public Security Minister Geneviève Guilbault added that the 10,149 evacuees from 6,681 flooded homes need to prepare for the long haul.”

“The receding of the water all over Quebec is going to be very slow,” Guilbault said Monday. “I want to prepare people, to tell them to arm themselves with patience.”

New Brunswick Premier Blaine Higgs opened [7] discussions with federal Finance Minister Bill Morneau on financial relief for homeowners, as well as funding for future mitigation efforts, as floodwaters along the St. John River system began to recede [8] after triggering the third round of major damage since 2008. In Ontario, the Kashechewan First Nation was at the provincial legislature, calling for [9] coherent action on annual flooding, while hundreds of people were evacuated [10] in Ottawa’s Constance Bay neighbourhood and experts said [11] the “real test” would hit the capital city Wednesday or Thursday, when the Ottawa River was due to hit its peak. As of Monday afternoon, more than 9,000 volunteers had filled more than a million sandbags.

And in Ontario’s cottage country region of Muskoka, drone footage captured [12] epic flooding, while troops and inmates worked [13] side by side to protect homes and businesses in the town of Bracebridge.

“We thought 2013 was a hundred-year event,” said [14] Mayor Graydon Smith referring to a previous flood, “and here we are six years later.”

While communities began tallying the damage, and governments consider [15] buyouts for flood-prone properties, experts said Canada is far behind in preparing for the front-line impacts of worst-case climate change scenarios. “Go with the conservative prediction of the future. Go with something that is predicting high potential impact,” advised [16] Slobodan Simonovic, director of engineering studies at the Institute for Catastrophic Loss Reduction, who teaches at Western University in London, Ontario.

“The extreme rain, precipitation events that are occurring now are going to continue, and indeed are going to get worse going forward for sure,” Blair Feltmate, director of the University of Waterloo’s Intact Centre on Climate Adaptation, told [17] CBC. “Because a certain proportion of that which is driving these events is climate change itself. So we’re getting more storms of greater magnitude, of greater intensity, [and] higher volumes of water coming down over shorter periods of time.”

In an interview with National Observer, Feltmate traced the development of new infrastructure standards to help communities adapt. “We know what to do to take risk out of the system. The problem is complacency. We’re simply not moving fast enough on these files,” he said. “I think the light is starting to dawn. If we ignore it, we do so at our own peril.”

“It’s obvious our circumstances are changing and we need to change as well,” wrote New Brunswick Transportation Department spokesperson Paul Bradley. “Discussions about how we can reduce the impact of flooding on provincial infrastructure have already taken place.”

Feltmate and others traced a series of factors, amped up by a changing climate, that increase communities’ vulnerability to flooding. “Here in Ontario — and the trend is the same right across Canada — we’ve lost 73% of the original, natural infrastructure that was here 100 years ago: forests, fields, wetlands, marshes,” he told CBC. “That’s disappeared. That’s either been paved over or turned into agricultural development, such that when the big storms hit, water isn’t absorbed quickly on these new surfaces.”

Geographer Kevin Manaugh, a professor at McGill University’s School of Urban Planning, added that Quebec’s transportation infrastructure is hard to protect from cold winters, high precipitation, and a freeze/thaw cycle that form a “unique set of circumstances that makes it harder to plan for things that will last for decades and centuries.” But he told Observer that planners can introduce more permeable paving materials, plant trees, and create water retention basins near developed areas.

“The more we build green space and rainwater retention,” he said, “these are solutions that exist to make sure the land can take more heavy rainfall.”

But while the more practical, tactical approaches to climate change adaptation gained ground, it wasn’t at all clear that the larger, political conversation about mitigation and prevention was advancing.

“As one year of record flooding is surpassed by another, the issue becomes increasingly political,” writes [14] Globe and Mail columnist John Ibbitson. “Believe it or not, this is a good thing, because it forces conservative politicians to take global warming seriously, and to respond.”

While Canada is not the world’s biggest greenhouse gas emitter, “that does not relieve this country of its moral obligation to do its part,” he continues. “Both federal and provincial Liberals have long claimed they get this. Conservatives now say they get it, too.”

But they have a funny way of showing it. When Ontario Premier Doug Ford visited flood-stricken Ottawa last Friday, he acknowledged that “something is going on,” and “we have to be conscious of it,” but apparently couldn’t bring himself to give that “something” a name. And Ford was hard-pressed to match the monster truck rhetoric [18] and outsized climate threats now emanating from Jason Kenney’s Alberta.

“Beyond a certain point, willful ignorance must surely give way to reality,” Ibbitson opines. “Any climate skeptics living in the national capital have endured a freak batch of tornadoes, the longest-lasting snow pack on record, and now these floods, all in the past year.”

“If this month’s flooding (and whatever else climate change has in store for us over the spring and summer) has a political impact, it might be to persuade the Conservatives to aim for something closer to Canada’s Paris target. It might also motivate the Liberals to add to their agenda and fill in the gap between current projections and Canada’s international target,” he writes [19].

“But the frame of this debate seems to be frozen in place. The planet might have to get even hotter before that changes.”

Although we are 11th on the scale of the amount of emissions as a country we have the highest rate of emissions per capita of any country. That should be the statistic we stress.