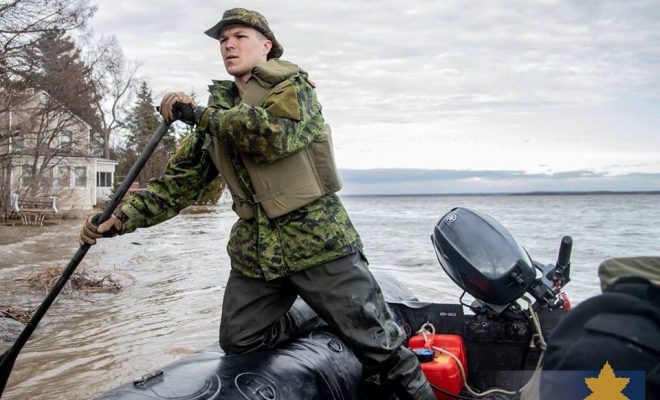 With the decommissioned Chute-Bell/Bell Falls hydro dam west of Montreal holding back “millennial” water levels and the downstream town of Grenville-sur-la-Rouge evacuated against a possible breach, authorities are watching and waiting as provincial utility Hydro-Québec predicts a 30% increase in water flow over several days.

“A dam like Bell Falls is designed to withstand a flood that happens once in a thousand years,” the utility’s head of production, Simon Racicot, told [1] CBC Thursday. But “today at noon we reached that level, and at that point there’s a protocol in which we notify civil security and residents of imminent danger.”

Beyond that point, “we cannot legally and morally guarantee that the structure will be able to hold such a pressure,” said Hydro-Québec spokesperson Francis Labbé. “The wise thing is to get out in advance of a problem and not wait until the last minute,” federal Public Safety Minister Ralph Goodale said Friday, noting that people would have had less than an hour to get out if they’d waited until after the dam failed.

A day later, residents at greatest risk downstream were evacuated, watching, and waiting, with 15 people airlifted by helicopter from homes already surrounded by water. “Every person who was located in the risk area in Grenville-sur-la-Rouge has been evacuated as a preventive measure,” Quebec Public Security Minister Geneviève Guilbault said Friday. Hydro officials were “still confident that the dam will resist the flow, but if it doesn’t, no one is at risk.”

Meanwhile, CBC is reporting [3] 700 to 800 homes affected by a dike breach Saturday night in the Lake of Two Mountains region west of Montreal. Montreal [4] and Ottawa [5] have both declared states of emergency, and residents in some parts of west-end Ottawa may be forced to evacuate, with the Ottawa River expected [6] to rise 50 centimetres higher than the level it reached during devastating floods [7] in 2017. Climate action groups have been out on email and social media, urging supporters to step up and assist with sandbagging.

“Ottawa faces the flood of the century—two years after the last one,” tweeted [8] Ottawa Citizen reporter Andrew Duffy.

The Chute-Bell/Bell Falls dam was built in 1915, has not produced electricity in a decade, and is fitted with a “floating structure” to regulate water flows, CBC reports. “It’s an overflow spillway dam, which means it has a concrete retaining wall, topped with a spillway crest,” the national broadcaster explains. “The concrete wall is approximately 60 metres and prevents water from the reservoir from overflowing. When water levels are too high, the crest at the top of the wall enables the overflow water to pass through.”

The dam’s normal flow is 103 cubic metres per second, but as of Friday, floodwaters were pouring through at nearly 10 times that rate. With withholding capacity of four million litres, the dam “can only withhold water for a few hours before overflowing,” CBC adds.

[…] Ottawa city hall reporter and self-styled “stormwater correspondent” Jon Willing says councillors (most of them, anyway) could hardly have voted against the resolution at a time when its “riverside communities and neighbouring municipalities are fighting bloated waterways” in the midst of severe regional flooding. […]