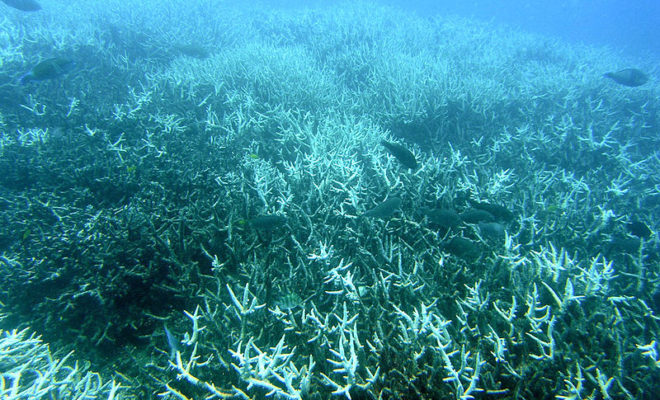 The replenishment of new corals on Australia’s Great Barrier Reef crashed 89% in a mass bleaching “event” in 2016 and 2017 triggered by climate change, and also produced a shift in the coral species on the reef, according to a new study in the journal Nature.

The study results “paint an uncertain picture for the reef in years to come if further bleaching events occur before corals have time to sufficiently recover—which typically takes a decade,” The Guardian reports.

“We’ve told the story of coral dying, we’ve told the story of some being winners and losers. Now we’ve got the next phase where species have a chance to recover,” said lead author Terry Hughes. “But what we’re seeing is that it’s happening a lot slower because we only have 10% of the babies.”

Hughes, a coral scientist at the ARC Centre of Excellence for Coral Reef Studies at James Cook University, said the number of new corals dropped 89% on average and even more in northern sections of the reef, hitting 98% around Lizard Island. The study attributes the collapse to the loss of adult coral stock.

“The researchers also found that the mix of species that make up the pool of coral babies has shifted dramatically,” with acropora, the reef’s dominant species, declining 93%, The Guardian states. “On a healthy reef, acropora typically make up two-thirds of the corals and provide the nooks and crannies for fish and other species.”

While the permanent loss of the coral is not assured based on this study, Hughes predicted a long, uncertain road to recovery. “The adult population will need to reassemble,” he said. “There’s a dearth of large, highly productive corals in the system. It will take some time to regroup so the production of larvae gets back up to normal levels.”

“We’re not saying it’s a permanent crush. But I’m pretty damn sure it’s going to be slow,” Hughes added. “The main concern is it won’t be a sustained recovery because the timeline of it—a decade—is almost certainly going to include one or two future bleaching events.”