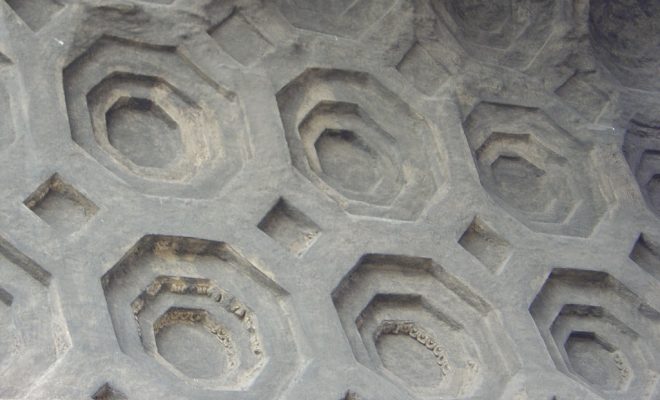 Alternative cement places #36 on Drawdown’s list of climate solutions, with the potential to avoid 6.69 gigatons of atmospheric carbon dioxide by 2050. The shift would save US$174 billion, because such alternatives ultimately last longer.

The trouble with conventional cement, Drawdown notes, is that fundamental to its strength is calcium oxide, produced by kiln-roasting a mixture of limestone and aluminosilicate clay at about 2,640°F/1,445°C. Out of this inferno comes lumps of the desired oxide, known as “clinker”—and huge volumes of waste carbon dioxide that account for “roughly 60% of the cement industry’s emissions”.

Add the reality that “manufacturing a single ton of cement requires the equivalent energy of burning 400 pounds of coal,” and conventional cement leaves behind nearly one ton of carbon dioxide for every ton of cement produced, ultimately delivering 5 to 6% of society’s annual anthropogenic emissions.

While one path to lower emissions lies in “more efficient cement kilns and alternative kiln fuels,” Drawdown says, the “crucial strategy” is to substitute the carbon-intensive clinker with materials that don’t require kiln processing.

Amongst the clinker substitutes already in use are blast furnace slag and fly ash, the latter a byproduct from coal-fired power plants. Drawdown acknowledges the imperative to shut down coal-burning. But given the heavy metals and other toxins contained in fly ash, “as long as coal is being burned, fly ash cement is a good use of the byproducts—far better than sending them to a landfill or holding pond.” Then again, due to the high toxicity of fly ash, research is now under way to determine whether it can be “held safely within concrete or might leach out, as well as what risks may arise at the end of a structure’s life.”

Aware that fly ash recycling constitutes a best use of a bad product, jurisdictions are looking elsewhere. New York, for example, “has embraced ground bottle glass as an emerging substitute that can be sourced regionally and saves landfill space—an innovation that may be poised for growth.”

3 Comments To "Alternative Cement Would Save 6.69 Gigatons of Carbon by 2050"

The ground glass as a substitute for sand in Concrete has been used in France on th Air France Office buliding at Charles de Gaulle Airport, Paris, It apparently has good insulating qualities and reduces certain eminnions frm concrete.. Jeff Ware

Some countries are already using plastic waste to make blocks and to pave roads. No need for ash.