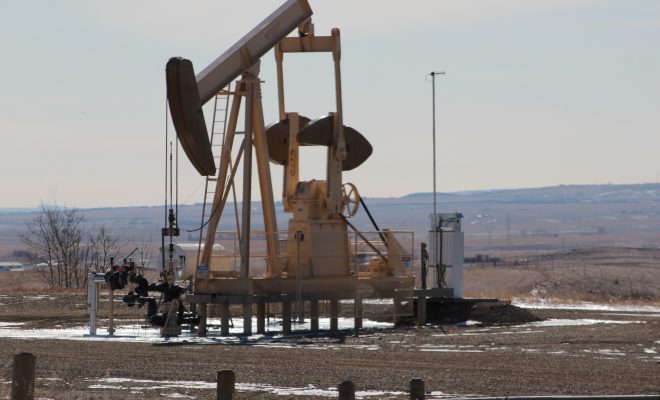 Thank you for visiting my page/Flickr

The cost of cleaning up Alberta’s old and unproductive oil wells could max out at C$70 billion, according to a new report by a consortium of landowners and scientists that used data from the Alberta Energy Regulator (AER) to come up with its estimate.

And while CBC summarizes the Alberta Liabilities Disclosure Project (ALDP)’s calculations, The Narwhal is out with a report [1] that the province issues 97% of its reclamation certificates for remediated oil and gas wells through an automated online system, without actually visiting the sites to verify the work.

In its study issued in Calgary Monday morning, the ALDP came up with a cost range of $40 to $70 billion, with a maximum that “is much higher than an AER estimate, which pegs the anticipated cleanup cost of all oil and gas infrastructure at $58.65 billion. The AER’s number includes pipelines and other facilities, while the ALDP only looked at oil and gas wells,” CBC reports.

“I’ve spent the last three years trying to come up with a viable solution to this conundrum,” said ALDP researcher Regan Boychuk. “The first step is understanding the problem better and calling for transparency” from the provincial regulator.

While 3,000 abandoned wells are on Alberta’s current remediation list, CBC says the province has 100,000 that will need to be dealt with.

“The mess continues to grow,” said Mark Dorin of Didsbury, 80 kilometres north of Calgary, whose land is also home to a well that he said leaked gas into the air for several years. “My garden is very close in proximity to the oil well, which had supposedly been shut down,” said his mother, Shirley. “I would notice a really severe headache when I would be out in the garden.”

The family had to call provincial officials and hire a lawyer to get the gas leak stopped, CBC says, and the well still hasn’t been cleaned up. While some parties in Alberta’s provincial election have talked about abandoned wells, the national broadcaster says the issue hasn’t been prominent.

“The two pieces that I think are needed, regardless of party, are timelines and security in some form. It doesn’t necessarily need to be cash,” said Ecojustice lawyer Barry Robinson.

Even when wells are reclaimed, The Narwhal’s research shows the AER is falling far short of the 15% random inspection rate it’s claimed. Data for 2014-2018 show only 277 site audits for the 9,400 reclamation certificates the regulator issued.

“This means the vast majority of oil and gas sites are certified as reclaimed without any independent physical assessment by the regulator—and most reclamation certificates are granted by an automated system,” The Narwhal states.

The story traces a series of claims for higher audit rates, none of which were borne out by the AER’s actual data. “Data shows that 12.7% of approvals have involved any kind of audit at all over the most recent four years for which data is available,” the publication states. “Of those audits, the vast majority are simply a human review of the paperwork, a procedure called a ‘desktop review’ that was introduced in 2016. Field visits are much more rare,” and subsurface audits are rarer still—those were a factor in just over 1% of the reclamation certificates, and the nearly 6,000 certificates approved between 2015 and 2017 involved not a single subsurface audit.

The Narwhal notes the AER “is an independent corporation funded entirely by industry. It is mandated by the provincial government to oversee regulation of oil and gas activities in Alberta.”

An AER spokesperson said the audit program “was in a ‘state of transition’ and that it has only been auditing under its current system for one year (5% of sites were visited for any kind of field audit last year),” writes reporter Sharon J. Riley. “Thirty-six per cent of reclamation certificate applications were audited—the vast majority of which were desktop reviews—last year, up from 5% in 2016-2017.”

Riley’s in-depth report looks back on the work of the Oil and Gas Remediation and Reclamation Advisory Committee, formed in 2003 to address the overwhelming number of applications for reclamation certificates the province was receiving. Alberta Environment and the Canadian Association of Petroleum Producers (CAPP) were both at the table, as was National Farmers Union director Peter Eggers, representing the Alberta Conservation Tillard Society.

In an interview with The Narwhal, Eggers recalled the last day the committee met, where representatives of the two larger organizations faced off across a meeting table and other stakeholders literally watched from the sidelines. “The CAPP people were dictating to the [Alberta] Environment people,” he said. “The CAPP people would always kind of put their fist down,” and “the rest of us were there just for the alibi.”

Eggers said the end result was a “bingo-dauber agency” that has since morphed into the AER, ultimately proving the suspicions he’d previously heard that “the oil companies were dictating how things would happen”.

The regulator “is an agency that is supposed to appear to the public that they have really good oversight,” he told Riley. “But it lets sites slip through the cracks.”