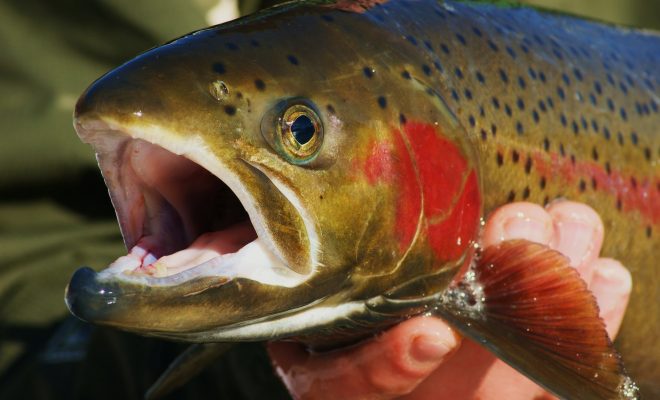 The federal government has spent more than year considering an emergency warning from scientists that pits endangered steelhead trout, and their importance to the Coldwater Indian Band in southern interior British Columbia, against Ottawa’s determination to push ahead with construction of the controversial Trans Mountain pipeline expansion.

Under the federal Species At Risk Act, the Committee on the Status of Endangered Wildlife in Canada (COSEWIC) “conducted an emergency assessment of Thompson and Chilcotin River steelhead trout in January 2018, concluding that the species was in danger,” National Observer reports. “It subsequently sent federal Environment and Climate Change Minister Catherine McKenna its report the following month, recommending an emergency order to protect the trout by listing them as endangered” under the Act.

The February 13, 2018 letter from then-committee chair Eric Taylor said the steelhead face “unprecedented decline,” adding that low survival rates in a warming ocean and unintentional killings by commercial salmon fisheries represent a “serious and imminent threat to their survival”.

That kind of emergency determination is rare for COSEWIC, Taylor told Observer. “But the committee’s report made it clear that the species was facing a significant threat,” the publication states. “Both populations of steelhead trout have declined by about 80% over the past two decades, the letter indicated, going from populations that numbered in the thousands in the mid-1980s, to dozens in the most recent assessment.”

So “it isn’t clear why the government has taken more than a year to respond to the committee’s emergency warning,” Observer states. The office of Fisheries Minister Jonathan Wilkinson said conserving the steelhead populations is “an extremely high priority and will be a focus of decisions with respect to fisheries management plans for the year ahead.” But it said it would need six to eight months to decide whether to release a large dossier of briefing materials on the steelhead, as it has been asked to do under an access to information request.

In a formal submission to the National Energy Board, the Coldwater Band said local salmon and steelhead populations are “integral to Coldwater’s way of life and have been for generations,” adding that the remaining population is vulnerable to an oil spill and to impacts during pipeline construction. The Thompson River steelhead population spawns in the Coldwater River, which runs through the community’s reserve and traditional territory along the proposed pipeline route.

“I talk to my dad and he told me stories about when he was young, there were so many steelhead in the river, you could walk across the river on their backs,” Coldwater Chief Lee Spahan told Observer. In 2017, only 21 returned to the river to spawn.

“It’s frustrating to know that [Trans Mountain] can put an application in and get a permit to run forward on proposed work, and not have any paperwork or documentation to back up that their work is safe and that there are no fish at the time returning in these streams,” he said.

Richard Prest
We have yet another scientific report that Catherine McKenna withheld from the public interest for a year, about the depletion of the Steel head Trout in BC, because she is protecting the Trans-Mountain pipeline, because they want to lay their pipe in their river. The Harper government did the same thing with the report they funded on the effects of Bitumen in water and how to clean it up. So how many reports are they hiding from us, which is what a Tyrannical government does .