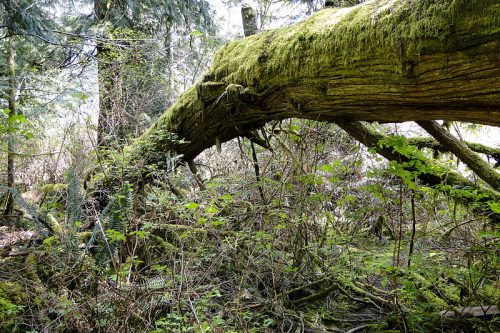 A British Columbia agency is proposing to log the province’s last ancient stands of old-growth forest “to oblivion”, Elphinstone Logging Focus (ELF) and Sierra Club BC warned in a release last week.

The groups’ review of BC Timber Sales’ (BCTS) sales schedule “found the provincial government agency is proposing cutblocks across the last intact old-growth rainforest areas on Vancouver Island, adding up to more than 1,300 hectares,” Sooke Pocket News reports. “The area, equivalent to the size of more than three Stanley Parks, is intended to be auctioned for industrial clearcutting in 2019.”

The majority of the cutblocks “target intact, productive rainforest ecosystems that have only a fraction of their original extent remaining,” the paper adds. “These areas are at high risk of losing the plant and animal species that depend on them.”

“Logging 1,300 hectares of scarce, carbon-rich, old-growth forest is about the worst action a B.C. government agency could take for climate change mitigation and forest resilience on Vancouver Island,” said ecologist Dr. Jim Pojar, author of a recent report on forestry and carbon. “These clearcuts will release hundreds of thousands of tonnes of carbon dioxide, and destroy more temperate rainforest and diverse forms of life.”

“Destroying the last great old-growth stands is a huge mistake that will be looked back upon by future generations as a huge travesty,” he added. “Remaining intact forests are needed to create linkages within highly fragmented landscapes and avoid tipping points when it comes to climate change and species extinction.”

While B.C. has yet to release details on the proposed cuts, Sierra Club B.C. says the province continues to log old-growth forest at a rate of three square metres per second, or about 34 soccer fields per day.

10 Comments To "B.C. to Log Old Growth Forest ‘to Oblivion’, Release Thousands of Tonnes of CO2"

There is a movement in Duncan, the North Cowichan Municipality, to modify the usual ideas of forestry to take a broader approach to management of the Municipal Forest on 6 mountains. We must get away from the idea that decent land-use is simply an economic problem (Aldo Leopold, A Sand County Almanac), it also has issues of environment, biodiversity, traditional indigenous uses, gathering, watershed protection, modified harvesting, sustainable harvesting, wildlife habitat. The citizens want to have access, and want a say in how the forests are treated. We should extend this more broadly to the larger forests, and deal with the 140 to 240 plus year forests. The trained forester is a valuable asset and key to directing actions. We need to develop a land ethic, yes a love of the land and forest. “A thing is right when it tends to preserve the integrity, stability, and beauty of the biotic community.” The old growth is so rare, and so biotically diverse, that we must set some of these aside to maintain examples of what is there.

No, don’t destroy another old growth forest! Don’t break people’s hearts. Leave such treasures for our children, all other sentient beings, and give our planet a chance to continue to provide and nurture survivors of the coming global catastrophe.

Hell no leave it alone dumbass

Good Lord! I thought that Canada had its act together. Guess not =(

There goes the hypocrisy of Horgen govt., fight against pipeline, bring it in from Saudi who breaks every rule and then cut down old growth forest in your beautiful backyard without a thought. How warped and disconnected are they? Really!

You’ve got an interesting juxtaposition there. No pipeline currently under consideration is about reducing a volume of Saudi oil coming into Canada that is small in the scheme of things, though still a reality. Before TransCanada withdrew its proposal for the Energy East pipeline rather than subjecting it to a legitimate climate test, there was an interesting myth going around that some of the bitumen it carried would replace Saudi oil entering the Irving refinery in New Brunswick. But if I understood correctly at the time, Irving had no capacity to process bitumen and no intention of changing that, so it became pretty clear pretty quickly that Energy East was strictly an export project.
Not to say that B.C. should be cutting down irreplaceable old growth forest. But the province’s concerns about pipeline safety on land and at sea give it every reason to oppose Trans Mountain, and should give Alberta every reason to seriously rethink the viability of the single, economically and environmentally shaky resource on which it has chosen to stake its whole economy.
But I’m glad we can find common ground on old growth forest, and I’m betting we’ll agree on how likely it is that a Kenney government will see sense on the need for a transition off carbon! (Whether you’ll agree that that’s sense is something I’d be happy to continue discussing.)

This tragedy has been happening for decades. Every politician with any power to stop it that hasn’t YET enveloped these ancient forests in a unbreakable legal bubble of protection forever is no better than a lying, cheating, self serving p.o.s.
MORITORIUM ON LOGGING ANCIENT FORESTS NOW ALREADY!

Please include link(s) to where and how we can protest and petition! It’s heartbreaking to read this and feel we can’t do anything ?
Need more visibility and support for those already mobilized…
ie
https://www.ancientforestalliance.org/petition/

Thanks for the note and the link, MaryAnne. We always connect our stories back to the original source material — the attribution at the top of every page is a live link.