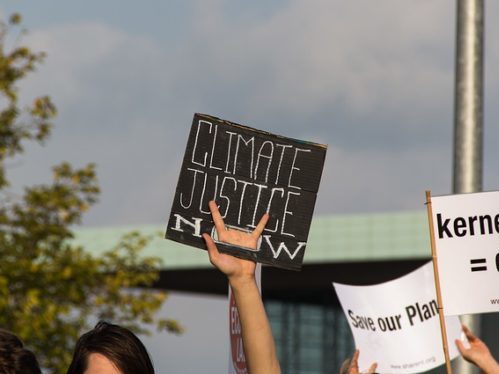 The “existential exceptionalism” of assuming that climate change makes the environmental movement the first in history to stare down a threat of such great magnitude is “downright insulting” to communities of colour that can trace back hundreds of years confronting equally pervasive perils, Bronx-based writer Mary Annaïse Heglar argues on Resilience.org.

“I’m with you when you say that climate change is the most important issue facing humankind,” she writes. “I’ll even go so far as to say it’s the most important one ever. But, when I hear folks say—and I have heard it—that the environmental movement is the first in history to stare down an existential threat, I have to get off the train.”

That line of thought is “inaccurate, shortsighted, and arrogant”, she adds, and ultimately divorces environmental issues from a wider “arc of history”, including the 400 years in which African-Americans have faced a continuing existential threat in that country.

“I want you to know that Jim Crow—far too tame a name for its reality—was never about water fountains or bus seats or lunch counters. It wasn’t about ‘integration’,” writes Heglar, who was raised in Birmingham, AL and Port Gibson, MS. “Instead, I want you to imagine living in constant, crippling fear of humiliation, rape, torture, and murder—in a word: terrorism. Lynching was not some abstract threat or a one-time event. It was omnipresent. It hung in the air like humidity. Or the stench of burning flesh.”

Her post goes into detail on that history, with examples as graphic as the most horrifying predictions of future climate impacts.

“They, too, trembled for every baby born into that world.

Heglar’s advice for climate hawks planning to “educate” communities of colour about climate change is to “remember that they have even more to teach you about building movements, about courage, about survival.” While “nothing scares me more than climate change,” she concludes, “I made up my mind to face it head-on because of my debt to future generations and to previous generations.” The history “belongs to all of us. And I want you to know it too. You can’t afford not to.”