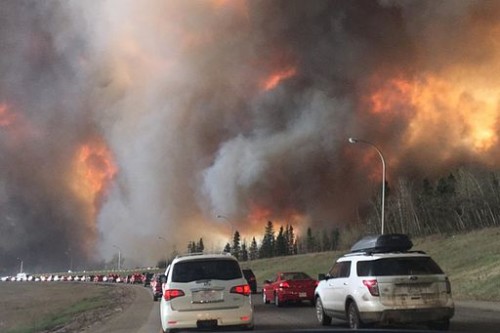 Climate change is warming Canada twice as fast as the global average, Northern Canada is heating up nearly three times as fast, and three of the last five years were the country’s warmest on record, Environment and Climate Change Canada revealed [1] this week, in the first of a series of Canada’s Changing Climate Reports (CCCR) the department plans to roll out between 2019 and 2021.

“Canada’s climate has warmed and will warm further in the future, driven by human influence,” the report concludes [2]. “Both past and future warming in Canada is, on average, about double the magnitude of global warming,” and lower-emission scenarios “will only occur if Canada and the rest of the world reduce carbon emissions to near zero early in the second half of the century.”

The report, due to be released yesterday, was leaked to CBC News columnist Neil Macdonald Monday.

The net result is that “if climate change worldwide is much more frightening and immediate than we all thought, as the UN’s Intergovernmental Panel on Climate Change (IPCC) reported [4] six months ago, it’s at least twice as bad in Canada,” Macdonald writes [2]. “Twice. As. Bad.”

“This might mean five or six degrees for Canada—and eight or nine degrees for the Arctic,” said [5] Shawn Marshall, a University of Calgary climatologist who reviewed early drafts of the report. “This would be similar to the kind of temperature changes that take you in and out of ice ages.

Marshall added: “I have to believe that we’ll, sometime soon, start to change the curve on this and bring us into some sort of new balance. Because the further we go in this direction, the harder it’s going to be to right the ship.”

“The science is clear,” said [6] Nancy Hamzawi, Environment and Climate Change Canada (ECCC)’s assistant deputy minister for science and technology. “Global emissions of carbon dioxide from human activity will largely determine how much more warming Canada and the world will experience in the future.”

The report acknowledges that the only way for countries to hit the targets in the 2015 Paris Agreement is for “global emissions to peak almost immediately, with rapid and deep reductions thereafter”. It shows annual average temperatures increasing 1.7°C across the country 2.3°C across the North, since reporting began in 1948, the Globe and Mail reports. “While both human activities and natural variations in climate contribute to this observed warming in Canada, the human factor is dominant,” said Marjorie Shepherd, director of ECCC’s climate research division.

The report also shows the Prairie provinces and British Columbia warming faster than the national average, CBC states [7]. “Along with these temperature increases, the CCCR says Canada is experiencing increases in precipitation (particularly in winter), ‘extreme fire weather’, and water supply shortages in summer, and a heightened risk of coastal flooding.”

The study’s high-emissions scenario has temperature increases accelerating to 6.3°C through 2100. In its low scenario, they level off around mid-century and begin to decline slightly to 1.8°C—still above the global stabilization target of 1.5°C, at a moment when “every 0.1° [8] is a choice between life and death”.

“It’s important to recognize that additional warming is unavoidable and associated changes in climate will be experienced,” said ECCC climate science advisor Elizabeth Bush. “We are already seeing the effects of widespread warming in Canada at current levels of warming, the additional effects are unavoidable, so it’s clear the science supports the fact that adapting to climate change is an imperative.”

Warming will “intensify the severity of heat waves and contribute to higher risks of drought and wildfires,” CBC notes. “The report says extreme heat events—which currently occur every 20 years on average—will happen once every five years by the middle of the century under a low-emissions scenario, and every other year in a high-emissions scenario.”

In Alberta, “where voters are poised to head to the polls in two weeks, researchers and government officials have pointed to evidence that this province has faced climate change-related consequences,” CBC notes in a regional report. “A review of the Fort McMurray fire [9], conducted by MNP LLP for Alberta Agriculture and Forestry, warned wildfires will become more intense and frequent. The report noted that Alberta is in for a challenge as the areas susceptible to fire are also home to communities with thousands of people, infrastructure from electricity lines to pipelines, and industrial camps housing thousands of workers.”

The report shows annual precipitation increasing over the last 70 years, at above-average rates in the North and parts of Manitoba, Ontario, northern Quebec, and the Atlantic, with snowfall declining as a proportion of total precipitation in the south, CBC adds.

“Different Canadian regions have also seen declines in sea ice of between 5% and 20% each decade between 1968 and 2016,” the Globe adds [10] in its Morning Update newsletter. “And the problem is projected to get worse, continuing a trend of more extreme heat, less extreme cold, and rapidly thinning glaciers.” In a medium-emissions scenario, CBC notes, glaciers in Canada’s western provinces lose 74 to 96% of their volume by 2100.

“The effects of widespread warming are evident in many parts of Canada and are projected to intensify in the future,” Derksen said.

Meanwhile, the report says the oceans off Canada’s coasts have become more acidic and less oxygenated, CBC’s Macdonald notes, with future warming hitting hardest in ice-free Arctic waters and increased coastal flooding in most Canadians’ future. “Ocean warming and loss of oxygen will intensify with further emissions of all greenhouse gases, whereas ocean acidification will increase in response to additional carbon dioxide emissions. These changes threaten the health of marine ecosystems.”

Multiple media note that the report landed on the same day the federal government’s C$20-per-tonne backstop price [11] on carbon took effect in the four provinces—Ontario, New Brunswick, Manitoba, and Saskatchewan—that have either refused to establish their own pricing systems under the pan-Canadian climate plan or, in Ontario, rolled back [12] a perfectly serviceable plan that was already in effect. Conservative opposition leader Andrew Scheer has vowed to unwind the federal carbon price if he wins national elections this fall.

“To the Trudeau government, this is core-mission stuff,” Macdonald wrote Monday. “Last week, scientists from the environment department were brought in to the Prime Minister’s Office for briefings. The report will be public and online Tuesday, and Justin Trudeau and members of his cabinet will be pushing the issue as something bordering on a national emergency, which is not an unreasonable way to characterize it.”

And normally, “you’d think findings like these would penetrate deep into voters’ minds. Climate change, with reports like this one and that of the IPCC last October, is becoming an issue of economic self-interest,” he added.

“But these are not normal times. The Opposition is determined to keep public attention riveted on the SNC-Lavalin scandal, and former attorney general Jody Wilson-Raybould’s remarkably effective effort to take down the prime minister.” While Trudeau will want to change the channel and focus attention on the report, Macdonald speculated that “Wilson-Raybould will relegate climate change to the inside pages, just as she’s done with everything else. Which is lunacy, but that’s where we are.”

On Monday, Environment and Climate Minister Catherine McKenna tweeted [13] a message of support for the federal carbon price from ex-California governor Arnold Schwarzenegger, who introduced a similar measure more than a decade ago with bipartisan support. “I’m so happy that Canada is putting a price on pollution,” Schwarzenegger said. “I know it is very hard to do, because there’s always the other side that argues and says this is terrible for the economy.” But in California, “none of it came true. California is now number one, economically, in the whole United States.”

Good for Trudeau, good for McKenna! But the federal price should be increased yearly to keep putting the screws on. AND we need to stop any new big project dead in their tracks. For instance, the LNG Canada in BC is stupid. All you will do is increase the amount of methane emissions upstream, further destroying the NE B.C, and destroying the traditional cultural landscapes of the Blueberry River and Fort Nelson area, and putting their people under further health impacts. Stop sacrificing the Indigenous, non- indigenous, land and water, put a ban on fracking!

[…] climate,” Gelfand said in a statement, the same day Environment and Climate Change Canada (ECCC) officially released a report that showed the country warming at twice the global […]

WE are going the route of short neck giraffe. People (all Humans) have got to take back our CONSENT from the power of our Governments, both federal, Provincial, and local, and from the Global Economic network trickling down to our financial, business and industrial institutions. The level of STUPIDITY has got to come to an end. We are not talking about the loony falling another $0,05 or $0.10, We are talking about human lives, our survival as a species to be more dramatic.
True Climate Change is happening, No we can’t stop it, and NO if we did everything right today, this instant, this moment in time we will not be able to stop the effect of the upcoming changes in our global climate.
However a change of consciousness can happen today. We can make changes at local level and start building our line of defences from there.
I am currently working on a concept “When things go for the shits. Build a Village!”
Taking life at bite size, design and build Social Network Villages like an Urban, Rural, and Farmstead and focus on Passive NetZero Social housing, with Food (agriculture-forestry) , and Water at the forefront of our decision making. Project “iNFiNiTwe” will be designed to showcase current approaches, and facilitate discussions and activity for future challenges as they promote themselves.
We need a new model, the Global Economic Network will not survive on its present course. Global Climate changes will challenge our economies right down to individuals as the cost to manage each crisis as they present themselves are going to be insurmountable. When each country is digging deep into their pockets to find the next nickle to combat the effect, it will be called on individual to step up and man the front line as resources will be depleted.
If we start focussing on our local communities, we may just be the change of tide, that survives us.

Thanks, Steve. Anyone out there interested in commenting on whether we can get this done by focusing solely on local solutions? The comment board is open!