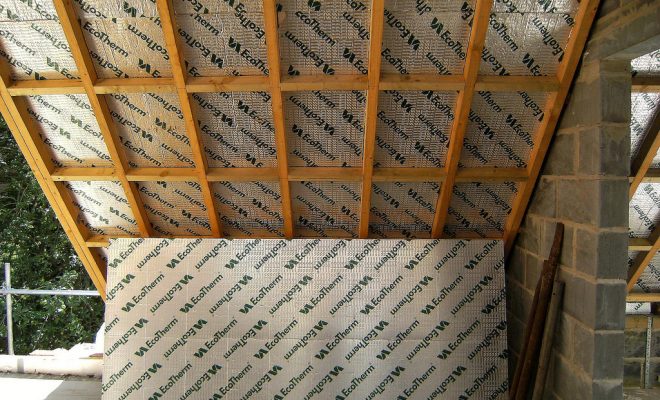 Insulation places #31 on the Drawdown list of climate solutions, with the potential to cut atmospheric carbon dioxide by 8.27 gigatons by 2050. The option carries an upfront cost of US$3.66 trillion, $2.5 trillion of which would be recouped within 30 years.

Everything from fibreglass to poultry feathers, newsprint to sheep’s wool, polystyrene to straw may be used to insulate a building—that is, turn it into an island (from the Latin, “insula,” notes Drawdown) closed off to unwanted heat exchange.

“Heat always moves from warmer to cooler areas,” writes Drawdown, “until an equilibrium is reached”. That adds up to a “thermal flow” which in summer causes indoor spaces to heat up, and “air conditioners to work overtime”. Winter finds householders heating the great outdoors while indoor furnaces go into overdrive.

With the U.S. Green Building Council estimating that such air infiltration “accounts for 25 to 60% of energy used to heat and cool a home—energy that is simply wasted,” there’s clear value in thoroughly insulating new buildings from the ground up, and retrofitting old ones, Drawdown states.

The effectiveness of an insulating material is fundamentally determined by its capacity to resist the passage of heat through its layers, but drafts and leaks can impair this resistance, “which is why sealing gaps and cracks is critical to a more effective building envelope.”

With energy savings as high as 90% over conventional buildings, Passive House sets “a high bar for insulation, and most buildings won’t reach it in the near term,” writes Drawdown.

But as “one of the most practical and cost-effective ways to make buildings more efficient,” insulation will be key to stopping drafty homes and workplaces from taking a wrecking ball to planetary health.