SNC-Lavalin and Trans Mountain: Two Sides of a Counterfeit Coin

In an analysis for The Energy Mix, award-winning investigative journalist Paul McKay traces the parallels between the SNC-Lavalin scandal that has transfixed Canada’s capital and the Trudeau government’s decision to buy the Trans Mountain pipeline in spite of its avowed commitment to climate action. “As nature abhors a vacuum,” he writes, “democracy abhors a stacked legal deck.”

Her testimony broke a brittle silence that pervaded the national capital. But it was far from a sordid fall-from-grace story. Instead, her calm, careful, dignified and damning testimony laid bare a covert campaign—led by the Prime Minister’s Office—to assist Quebec-based engineering giant SNC-Lavalin evade its pending criminal prosecution on bribery and corruption charges.

According to meticulous contemporaneous notes and texts kept by Wilson-Raybould and her senior staff, there was a barrage of behind-the-scenes meetings and phone calls involving Prime Minister Justin Trudeau himself, his senior PMO staff, other Cabinet ministers, and the highest-ranking federal civil servant. It was a siege, all done sotto voce, on tip-toes, and out of public view. But a siege nonetheless.

Despite this menacing mendacity, she held her ground as a matter of law. Previously, the independent federal prosecution service had decided to proceed with a criminal trial against SNC-Lavalin following an investigation by the RCMP, and in compliance with a new federal Criminal Code statute which specifically forbids granting “deferred prosecution agreements”, or an economic stress justification, in cases where the company is facing bribery and corruption charges.

As well, the DPA statute is designed to entice companies to self-report criminal conduct before being caught, so that penalties might be applied in lieu of potential criminal prosecution. But SNC-Lavalin only sought a DPA after being caught and charged—the opposite of what the statute intended.

The former Attorney General testified that she reviewed all this as part of the due diligence demanded by her post, then decided not to overrule the federal prosecution director. So SNC-Lavalin immediately sought an appeal and reversal.

At that point, Wilson-Raybould testified, she and her staff began explicitly reminding the Prime Minister, his PMO staff, and the most senior civil servant in Canada of the crucial firewall that exists to protect judicial independence. Buttressed by our Constitution and centuries of legal precedents, it is meant to act as a legal Rubicon which must never be crossed by anyone—up to and including the Prime Minister.

That fell on deaf ears. Virtually the last word in the secret standoff was the Prime Minister’s chief of staff advising that: “We don’t want to debate legalities anymore.” The actual last word was from Justin Trudeau who, without warning, phoned in January to advise Jody Wilson-Raybould that she had lost her Cabinet post. He might as well have said that someone as principled and brave as her was not suited to remain as his Attorney General.

Hours after her riveting revelations last week, Trudeau discounted to near zero the facts, dates, quotes, and conclusions she presented, insisting that neither he nor his Liberal aides had ever acted improperly or applied undue pressure. It was a moment that crystallized oblivious arrogance because—as a matter of law—such a judgement of conduct is for the Attorney General alone to make, not him.

Apparently the avowed feminist could not abide, even in this exceptionally rare instance, a female ‘boss’ with the Parliamentary authority to compel him to stop behaving badly.

This sleazy saga raises the question: If a government vows to respect judicial independence then throws it under the bus, if it creates conflicts of interest so corrosive they subvert the integrity of Crown laws and regulatory agencies, will it do so again? 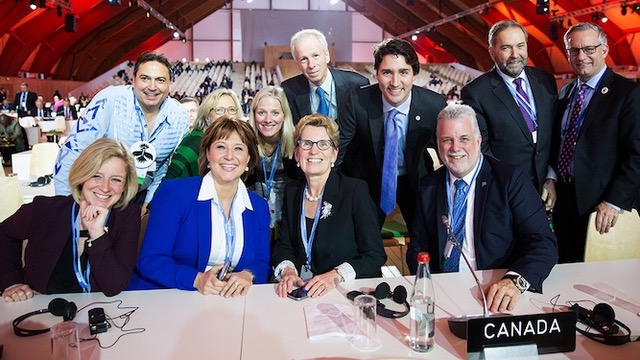 In fact, an equally ominous example is hiding in plain sight. The tell-tale warning signal is lofty political promises which pretend exact opposites are perfectly harmonious. As in the federal Liberals’ climate crisis plan and the government’s purchase of the Trans Mountain pipeline.

Based on overwhelming evidence and an international scientific consensus about the perilous levels of carbon in our atmosphere, Prime Minister Trudeau proudly signed the UN-sponsored Paris Agreement on behalf of Canada in late 2015. It committed 195 signatories to produce national carbon budgets to sharply reduce emissions. A year later, Parliament voted 200 to 81 to ratify the international accord.

Almost a year earlier in Paris, an unlikely array of federal politicians and premiers applauded Justin Trudeau’s leadership as he stated:

“The world gathered in Paris to fight climate change and its devastating impacts on our Earth, our health, our economy, and our very way of life. We also gathered with a common vision to leave a sustainable planet for our children and grandchildren”.

Then in March 2017, he won sustained applause at an oil industry conference in Houston by endorsing several pending pipeline approvals and stating: “No country in the world would find 173 billion barrels of oil in the ground and just leave them there.”

So he took applause in Paris and our Parliament for vowing to cut fossil fuel emissions, then another round in Texas for vowing to accelerate more pipeline construction and carbon-intensive bitumen output in western Canada. More output, of course, means more emissions.

Such epic doublespeak is not illegal. Nor are the pending failure to meet the Paris targets Trudeau pledged in Paris, the exemption of large emitters from national carbon tax payments, and an increase in federal fossil fuel subsidies when the opposite was promised. These are matters about which Canadian voters can deliver a political verdict this October.

However, when the federal government paid C$4.5 billion to purchase the existing pipeline assets of Kinder Morgan, and committed to spend at least $9.3 billion more to triple Trans Mountain’s oil export capacity for decades to come, it blithely created a quagmire of invidious legal conflicts which threaten to compromise and corrode federal regulatory integrity.

Simply put, the Trans Mountain deal made Ottawa both a major oil asset owner and its regulator simultaneously. As the pipeline owner, it has a fiduciary obligation to maximize future oil shipments and revenues, accelerate approvals and construction, curtail protests from the public and First Nations, and even counter judicial opposition from the government of B.C. Premier John Horgan.

(By ironic coincidence, the federal Liberals enlisted retired Supreme Court of Canada justice Frank Iacobucci to promote Indigenous approval for the Trans Mountain pipeline project after the B.C. Court of Appeals ruled prior First Nation consultations had failed to meet constitutional obligations. Iacobucci was simultaneously retained as outside legal counsel by SNC-Lavalin to help secure a coveted deferred prosecution agreement when Jody Wilson-Raybould was Attorney General.)

The publicly avowed Liberal government premise for buying out Kinder Morgan was to deploy federal money and legal muscle to win approvals and build a new pipeline because the private company could not. That would involve Ottawa taking on all comers in the courts, and before regulatory boards.

Given that the raison d’etre of the now federally-owned TMX is to move oil and make money, this puts every involved federal department, regulator, and safety agency in a potential conflict of interest. Some examples:

• The National Energy Board is mandated to impartially approve or deny new oil pipeline construction permits. When Ottawa seeks final approvals to triple Trans Mountain’s capacity, it will essentially be asking itself if that is a wise idea, putting a federal agency in the intensely awkward position of ruling on a project the federal government owns. The NEB is also mandated to ensure pipeline integrity and safety.

• The federal department of Fisheries and Oceans Canada is mandated to impartially protect ocean and inland water species and habitats, regardless of economic interests. If the federally-owned TMX applied for a rule exemption, an approval process would be compromised.

• In the case where a B.C. premier challenges, for public safety and environmental risk reasons, the tripling of bitumen exports via a Trans Mountain pipeline terminal in Burnaby, and a seven-fold increase in resultant oil tanker traffic through the Salish Sea, that province will face off in courts against the federal government, not a private proponent.

• A future federal Cabinet could formally declare the Trans Mountain pipeline and ship terminal “vital national assets”, then enact any draconian measure deemed necessary to keep it operating. It could ban all civil protests, or override B.C. environmental regulations, or order Alberta oil producers to keep the bitumen flowing at prices and volumes it dictated. Such measures could be fought all the way to the Supreme Court of Canada—with the appellants facing all the legal might and deep pockets at the disposal of the federal Crown.

• In order to bolster the future financial viability of its Trans Mountain pipeline, Ottawa might grant Western Canadian bitumen projects exemptions from federal carbon tax levies, emission limits, or clean-up orders if such producers were in danger of being uncompetitive. Or grant deferred prosecution waivers if criminal violations were uncovered.

This is only a small sampling of the potential legal skirmishes ahead.

It is a dark irony, but by stepping across another legal Rubicon to become both owner and regulator of Trans Mountain, the Trudeau Cabinet has likely brought upon itself a tsunami of determined opposition. As nature abhors a vacuum, democracy abhors a stacked legal deck.

Far from shutting down ‘debates about legalities’, these glaring conflicts of interest—in conjunction with the law of unintended consequences—will almost certainly foster countless more legal showdowns.

Only this time, the Trudeau Cabinet and a vast array of federal departments, agencies, and regulators will be pitted against not just a lone federal Attorney General of uncommon integrity, but thousands of citizen protesters, many First Nations leaders and communities, scientific and environmental advocacy groups, law associations, and at least one provincial premier.

They will undoubtedly have their many days in many courts. Even if Jody Wilson-Raybould, who currently represents a Vancouver riding near the Trans Mountain oil tanker terminal, is not among such future appellants, the fearless convictions about judicial integrity Puglaas lives by may well be.