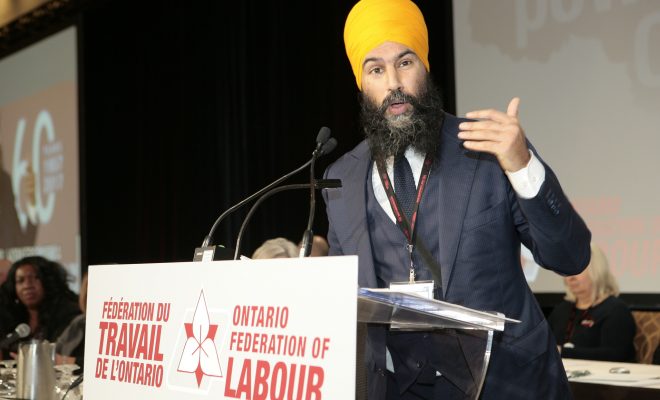 “Singh has tried to project unity in the party while facing internal criticism for poor fundraising and low support in the polls,” The Canadian Press reported in the lead-up to Monday’s vote. But “if he wins the byelection Monday and remains leader, he is likely to encounter calls from his caucus for a tougher stance on climate change.”

That analysis came after Singh declared his support for a project that will be the biggest in B.C. history if both phases are completed, and would blow a massive hole [2] in the province’s greenhouse gas reduction plan.

“The LNG project has demonstrated some clear, positive steps around consultation,” he said. “There was an exhaustive and pretty thorough consultation around Indigenous communities, First Nations communities, and elected bands and chiefs.”

Singh acknowledged that “there are people standing up and defending their land [3] who have the right to express those concerns, and there’s still ongoing work that needs be addressed before this project moves ahead.”

That acknowledgement referred to the Wet’suwet’en hereditary chiefs who’ve been fighting the Coastal GasLink pipeline to Kitimat, B.C. When a protester at a candidate debate in Burnaby South accused Singh of “turning his back on Aboriginal people,” CP reports, “the leader calmly listened and offered to speak with the man after the event.”

Singh’s position has also raised hackles within his own party. “Svend Robinson, the New Democrat candidate in Burnaby North-Seymour in the general election, opposes any new oil and gas infrastructure,” CP noted. Robinson said last year’s landmark IPCC report [4] on 1.5°C pathways was what motivated him to seek office after a 15-year absence from politics.

“The most important issue facing our planet and our country today is climate change. We have to effectively put the country on the same kind of wartime footing that we did at the time of the last world war to fight climate change,” he said. And “if we are to do that, there can be no new oil and gas infrastructure.”

University of British Columbia political science professor Richard Johnston said Singh is likely supporting LNG Canada to align himself with the minority NDP government in B.C. “He needs his friends,” Johnston told CP in the run-up to the byelection vote. “It means that the government of B.C. can be unembarrassed in supporting him in his attempt to get elected to Parliament.”