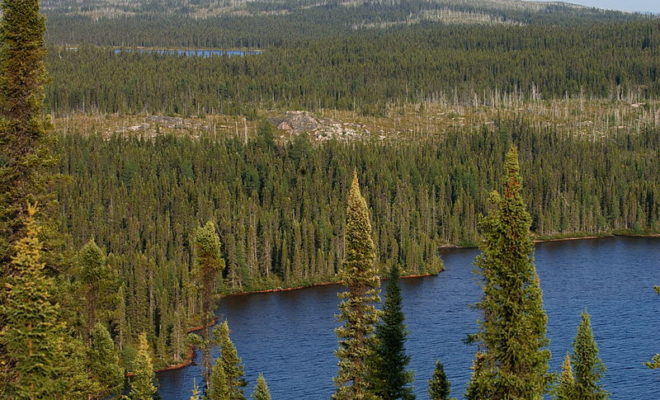 A mid-February analysis on CBC gets at one of the most persistent myths in Canadian carbon accounting—that the country’s forests absorb more carbon than they emit, or in some erroneous versions of the story, soak up so much carbon dioxide that there’s no need to worry about the rest of the country’s emissions.

The report comes at a time when the federal government is pushing for a new accounting approach that would allow it to take even more credit for forests as a carbon sink.

“Trees don’t just absorb carbon when they grow, they emit it when they die and decompose, or burn,” CBC explains. “When you add up both the absorption and emission, Canada’s forests haven’t been a net carbon sink since 2001. Due largely to forest fires and insect infestations, the trees have actually added to our country’s greenhouse gas emissions for each of the past 15 years on record.”

Last month, Sierra Club B.C. calculated [2] British Columbia’s uncounted forestry emissions at more than 400 megatonnes over two years, largely due to two seasons of raging wildfires. Environment and Climate Change Canada places the country’s net forest emissions at about 78 Mt for 2016, the last year for which official statistics are available.

So it’s no surprise that Canada “has historically excluded its forests when accounting for its total greenhouse emissions to the rest of the world,” CBC writes. “We had that option, under international agreements, and it was in our interest to leave the trees out of the total tabulation, since they would have boosted our overall emissions.” Canada’s greenhouse gas accounting methods also leave out emissions and absorptions from wetlands and farmland, “and with good reason, if the goal is to reduce emissions on paper”.

But now, the federal government is trying something new. Canada is “making the case to the United Nations that things like forest fires and pine beetle infestations shouldn’t count against us, and that only human-related changes to our forests should be included when doing the calculations that matter to our emission reduction targets.” That would mean leaving out impacts like the wildfire emissions documented by Sierra Club.

The shift in accounting methods would position the forest as a carbon sink, rather than a source. It wouldn’t be nearly a big enough sink to account for the country’s 700 megatonnes of greenhouse gas emissions per year. But CBC points out that the shift in process would “improve” Canada’s climate performance on paper, without anything actually changing on the ground.

“Canada should do as much as we can to sequester carbon naturally,” said Canadians for Clean Prosperity Executive Director Mark Cameron, a former policy advisor to then-prime minister Stephen Harper. And “we should take advantage of our forests, our wetlands.” But “it doesn’t mean that, because we have a lot of forest, we don’t have to worry about carbon emissions, which is often the line that people use.”

In a post last year for Policy Options, he added [3] that “by switching to one of the alternative accounting methodologies for emissions from land use, forestry, and forest products allowed under the framework, Canada could narrow the gap—perhaps by as much as 63 or 126 megatonnes—even if our actual emissions don’t change.”