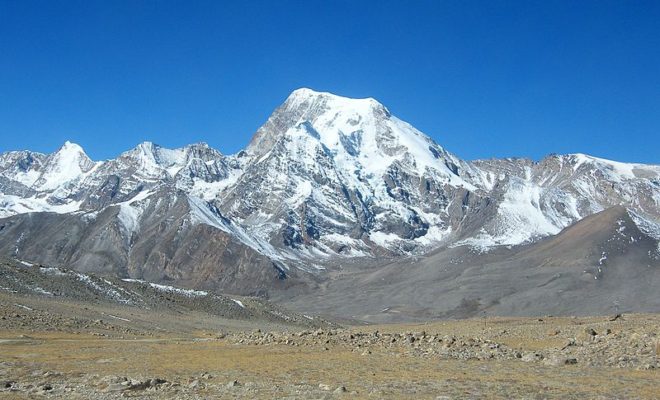 The Mount Everest area will lose more than half of its ice by 2100 in even the most optimistic greenhouse gas reduction scenario, and the Himalayan region as a whole will lose more than one-third, according to a 627-page regional assessment [1] released this week by the International Centre for Integrated Mountain Development (ICIMOD).

“The glaciers are a critical water store for the 250 million people who live in the Hindu Kush-Himalaya (HKH) region, and 1.65 billion people rely on the great rivers that flow from the peaks into India, Pakistan, China, and other nations,” The Guardian reports [2], adding that the region has lost about 15% of its ice since the 1970s due to rising temperatures.

The Nepali Times calls the new release a “terrifying assessment”, noting that glacier loss “would have devastating consequences for 1.6 billion people living in the mountains and downstream countries. Climate models show that summer flow in the Indus, Ganges, Brahmaputra, and their snow-fed tributaries will actually rise till 2050 as the glaciers melt away, but will start decreasing” once there is no ice left.

And “that would happen only if global average temperatures can be capped at a 1.5oC increase above pre-industrial levels,” the paper adds. “Most scientists agree that target is unlikely to be met. If current emission trends continue, the world will actually be hotter by between 4.2 to 6.5oC by 2100—in which case two-thirds of Himalayan glaciers will be gone.”

At 2.0°C, half of the region’s glacier coverage would be lost.

“This is the climate crisis you haven’t heard of,” said ICIMOD lead author Philippus Wester. “In the best of possible worlds, if we get really ambitious [in tackling climate change], even then we will lose one-third of the glaciers and be in trouble. That for us was the shocking finding,” bringing new attention to a 3,500-kilometre-long region running from Afghanistan to Mynamar that’s known as the world’s “third pole”.

“This is not just going to be another book on the shelf,” ICIMOD Director David Molden vowed Monday at the report release in Kathmandu. “We hope to spark policy dialogue by putting climate action on the political agenda, by putting the state of the knowledge in one place.”

The centre, whose members include Afghanistan, Bangladesh, Bhutan, Burma, China, India, and Nepal, is now pushing to set up a new Himalayan Council that would function much like the Arctic Council for the circumpolar north.

The Times notes that ICIMOD was particularly careful in conducting its assessment, after a 2007 IPCC report generated pushback with a prediction that all Himalayan glaciers would be gone by 2035. This time, the centre assembled a team of 210 scientists from 20 countries to spend five years reviewing the peer-reviewed literature.

“The new assessment is only slightly less alarming,” the Nepali Times notes. “Although the time frame has been pushed back to the end of the century, there is still very little time to fix the problem, even if global carbon emissions are cut in the coming decades. So, we know what the problem is, and we know the solution. What are we going to do about it?”

Impacts will range from severe water crises in heavily-populated downstream regions of China, Southeast Asia, India, Pakistan, Bangladesh, to increased droughts and flooding due to the impact of warming on flooding and monsooons. Wester told The Guardian the melt will push high-altitude lakes beyond their banks and engulf communities between 2050 and 2060, but after that the region’s rivers will go into decline. “Lower flows will cut the power from the hydro dams that generate much of the region’s electricity,” The Guardian states. “But the most serious impact will be on farmers in the foothills and downstream. They rely on predictable water supplies to grow the crops that feed the nations in the mountains’ shadows,” yet those supplies have already become less reliable or predictable.

Those impacts will hit a part of the world that already faces multiple disadvantages. “Himalayan countries have always struggled against poverty, marginalization, state neglect, inequality, discrimination, out-migration, and these problems predate climate change,” the Times states. Already, half of the children in Himalayan villages are undernourished, Nepal’s national poverty rate is 23%, 42% of its mountain dwellers are poor, and those communities are already beginning to see the front-line impacts of a changing climate.

“The new report highlights how vulnerable many mountain people are,” The Guardian adds, “with one-third living on less than $1.90 a day and far away from help if climate disaster strikes.”

“What global warming does is make all the existing structural problems worse,” the Nepali Times states.

Reporter Kunda Dixit notes that China and India, both ICIMOD countries, “are both suffering the impact of climate change along their common mountain frontier. Together, the two giants are the biggest emitters of greenhouses gases in the world. It no longer makes sense now to talk only about adapting to climate change, Himalayan countries need to also start mitigating their carbon emissions and switching to renewables.”

But The Guardian warns that ice loss and resulting water stress could add to existing regional tensions between India and Pakistan. “There are rocky times ahead for the region. Because many of the disasters and sudden changes will play out across country borders, conflict among the region’s countries could easily flare up,” said ICIMOD Deputy Director General Eklabya Sharma.

[…] Zurich glaciologist Daniel Farinotti.The Guardian coverage refers to a study earlier this year that showed the Himalayas losing one-third of their glacier ice by 2100 in the best-case scenario for GHG […]