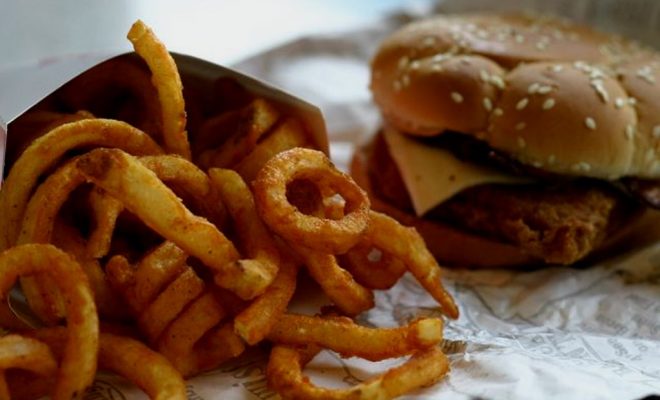 Scientists anxious about food insecurity, medical professionals concerned about rising rates of obesity, and investors frustrated by a fast food industry that remains careless of its emissions represent a growing chorus urging rapid and profound change to the global diet and food production systems.

In a study published last week, researchers from the University of Tasmania measured an alarming uptick in the frequency of climate change-induced threats to food production, reports InsideClimate News. The study authors “identified nearly 230 food production shocks, in 134 countries, from 1961 to 2013, and said the frequency of crop production shocks driven by extreme weather had been increasing steadily.”

Such incidents “threaten to destabilize the global food supply and drive up global hunger rates, which have started to tick up in recent years,” InsideClimate notes.

In their study’s abstract, the authors urge that “in a more shock-prone and interconnected world, bold food policy and social protection mechanisms that help people anticipate, cope with, and recover from losses will be central to sustainability.”

Medical professionals participating in two separate commissions recently convened by the UK medical journal The Lancet are on a similar wavelength.

“Made up of more than 40 experts from 14 countries,” writes ICN, the Lancet Commission on Obesity rapidly “reframed its mission to address the pandemics of obesity, malnutrition, and climate change—or what it called ‘the triple-burden challenges of The Global Syndemic’.”

“We decided we have to look at this with a systems approach,” said Vivica Kraak, a professor of food and nutrition policy at Virginia Tech who contributed to the commission’s recent report. “It’s not people’s fault. The environments they live in foster overconsumption and unsustainable choices.”

After determining that “malnutrition, obesity, and other diet-related conditions are the leading cause of poor health globally and that climate change will amplify them,” InsideClimate notes, the report’s authors are “arguing for an international treaty to address global diets and climate change, similar to a landmark 2005 global treaty that aimed to cut tobacco use.”

As with tobacco use in the past, their report observes, “powerful commercial interests” continue to drive unhealthy eating habits. The report draws clear parallels between the ongoing lack of political will to address climate change and the fact that “the enormous health and economic burdens caused by obesity are not seen as urgent enough to generate the public demand or political will to implement the recommendations of expert bodies for effective action.”

With that dangerous nexus of corporate greed, political cowardice, and climate change in mind, the Lancet’s other recent report on climate change and diet “called for a ‘comprehensive shift’ in global diets, including cutting meat consumption roughly in half, and for governments to factor sustainability into their dietary guidance,” ICN adds.

Another community calling for a “comprehensive shift” in how the world eats—in this case, how its (fast) food is produced—is a collection of 80 investor groups representing more than $6.5 trillion in assets that recently “called on six of the largest fast food companies, including McDonald’s and the corporate owners of KFC and Pizza Hut, to set targets for cutting greenhouse gas emissions from their meat and dairy supply chains,” writes reporter Georgina Gustin.

“Food production, globally, is responsible for about a third of greenhouse gas emissions, largely from meat and dairy production,” Gustin notes. Yet Ceres senior director Brooke Barton contends that this high-emitting sector has no low-carbon plan whatsoever.