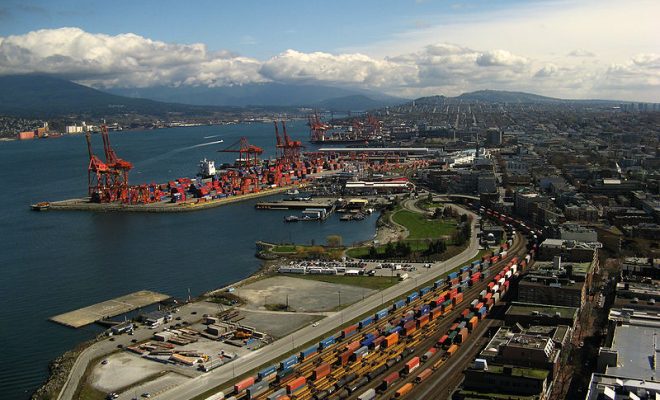 The Port of Vancouver has cut off a potential gateway for thermal coal from the United States with a decision to cancel its permit for a coal transfer facility at Fraser Surrey Docks, following adamant opposition from residents of Surrey and New Westminster.

The project would have brought up to four million tonnes of coal per year from Wyoming’s Powder River Basin through Metro Vancouver via open-car rail, accounting for seven million tonnes per year of carbo dioxide emissions.

When the port first approved the plan in 2014, it called for coal to be loaded onto barges and transported to nearby Texada Island, then transferred to ships bound for Asia. In 2015, the port agreed to allow direct loading of ocean-going ships on the Fraser River, a plan that increased the cost of the project from C$15 to $50 million.

In 2017, EcoJustice launched a Federal Court suit on behalf of the Communities and Coal Society and two local residents, arguing “that the port’s approval process was not impartial and that senior port officials stood to benefit from approval based on the port’s bonus system,” The Tyee reports.

Then on Friday, port spokesperson Danielle Jang confirmed “that the 2015 approval came with 83 conditions that ‘must be adhered to’, and that the project permit had been cancelled because the company had failed to show substantial progress by the required date,” the publication notes. “Sudden cancellation of the project permit received a jubilant response from opponents.”

“This was an extremely controversial project, facing opposition at every step of the way,” said Ecojustice lawyer Fraser Thomson. “This is really good news, definitely a win for the climate and for local communities who spent years tirelessly fighting against this project.”

Coal-fired electricity “really has no place in a world that is serious about fighting climate change,” he added. “An end to this project is a step in that direction.”

“This should be seen as a victory,” said South Surrey resident Paula Williams, who’d helped gather more than 11,000 signatures calling for an independent health assessment of the project. “It’s fantastic news. Maybe Fraser Surrey Docks knows this ship has sailed and…they’ll focus on something with less environmental impact.”

Clark Williams-Derry, director of energy finance at the non-profit Sightline Institute, said Fraser Surrey Docks “likely decided not to proceed with the project due to the volatility of Asian coal markets,” The Tyee states. “Political decisions by importing countries can dramatically lower import prices, including through decisions aimed at reducing smog in major cities or favouring renewable energy sources.’

“It’s a very risky business,” Williams-Derry told reporter Larry Pynn. “China can, with a stroke of the pen, create or destroy demand for tens of millions of tonnes of coal.”