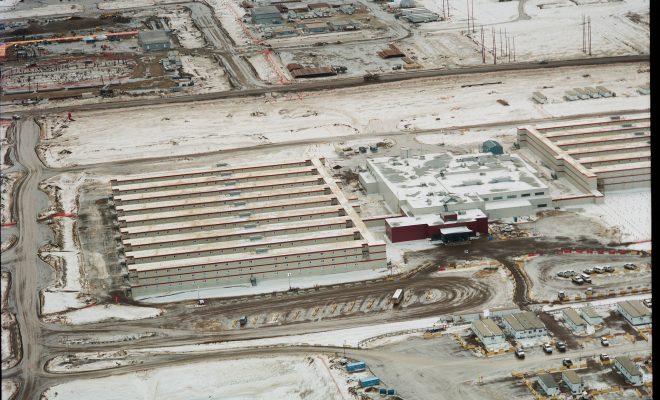 Staring down fierce opposition from tar sands/oil sands companies, councilors from Fort McMurray and the surrounding region have voted to impose a moratorium on fly-in/fly-out work camps that critics increasingly identify as benefiting only the fossils’ bottom-line, while extracting steep costs from surrounding communities.

The motion passed by councilors from the Regional Municipality of Wood Buffalo would “prohibit new work camps and deny renewals for existing camps within 75 kilometres of the urban centre” of Fort McMurray, reports the Globe and Mail. As a first step, “municipal staff will draft a bylaw, which will return to council for public hearings and a vote in the coming months.”

A strong proponent of the motion is Mayor Don Scott, who was “elected in 2017 on a promise to reduce the region’s reliance on fly-in-fly-out workers,” the Globe notes, and “initially proposed a moratorium within a 120-kilometre radius.”

Scott told the Globe the 27,000 or more workers in the 60-plus camps within 75 kilometres of Fort McMurray neither spend money at local businesses, nor rent in a housing market that has been correspondingly weakened by high vacancy rates and “tumbling prices”. (Fort Mac’s local economy has also been hurting in the wake of the 2016 wildfire known as The Beast.)

“If passed in its current form,” writes the Globe, the policy “would ban new work camps and deny renewals for existing camps, some of which will see their current permits expire in 2022.” Exempt from the ban would be “maintenance camps, shutdowns, and sites that are inaccessible by road.”

After mounting fierce opposition to the ban at council meetings leading up to the vote, tar sands/oil sands producers like Suncor continue to argue that the decision will be highly impractical, and even actively dangerous for workers on 12-hour shifts.

Noting that 5,000 Suncor employees already live and work in Fort McMurray, Tracey Wolsey, director of the company’s Indigenous and community relations for the region, said workers who do live onsite need to be there: “We know that those workers are better served and we’re better served if they’re close to our operations,” she said.

Asking workers scheduled for a 12-hour shift to drive as much as two hours in to work each day could be dangerous, she added. “We need to get our people there fit for duty.”

The ban could also imperil city coffers, warn industry advocacy groups. “The camps collectively pay more than $14-million a year in municipal taxes and account for a significant proportion of air traffic through the region’s main airport,” located on the outskirts of Fort McMurray, said Karim Zariffa, executive director of the Oil Sands Community Alliance.

Those comments came after early indications that fossils were prepared to play hardball: Earlier in the debate, MEG Energy Community Relations Manager Rory O’Connor warned that companies might have to “relocate their workers to the nearby community of Lac La Biche, which has a more friendly oilsands camp policy,” CBC reported [2] at the time.