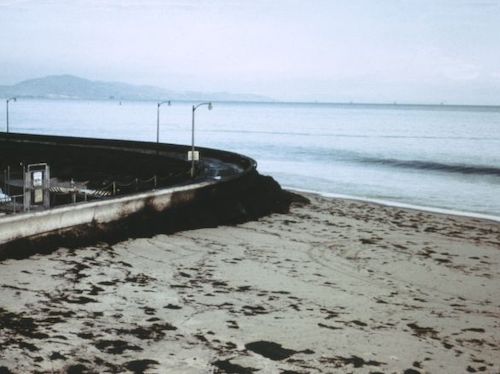 With the Donald Trump administration racing to deregulate the fossil industry and encourage oil and gas drilling off America’s coasts, Californians stopped on January 28 to mark the 50th anniversary of the Santa Barbara oil spill—the worst disaster of its kind to that date, and one of a handful of  ecological disasters that launched the modern U.S. environmental movement.

“The events that led to the spill began one morning on Platform A, a rig located about six miles from the coast and operated at the time by Union Oil,” National Public Radio recalls [1]. “Workers had already drilled four wells from the platform and were drilling a fifth when they ran into a problem.”

Pressure in the oil reservoirs overwhelmed the well’s safety systems, explained marine biologist Douglas McCauley. “Better reinforcement of the well might have prevented the spill,” NPR notes. “But Union Oil had received a waiver from the government that allowed the company to drill without installing steel casing pipe to the depth usually required by federal regulations.”

In the end, workers “capped off the blowout successfully,” McCauley said. “But they created so much pressure at the bottom of this well that it actually broke open the seabed.” The five ruptures in the soft sandstone released so much gas that the water appeared to be boiling, and the eventual oil spill covered an area nearly the size of Chicago.

“Right where we’re sitting right now you transformed from this ecosystem of amazing richness, amazing biodiversity, amazing biological activity into a sort of Armageddon of blackness,” McCauley told NPR, during a boat trip out to Platform A.

“I smelled it long before I saw it; it really stank around here,” recalled lawyer Marc McGinnes, who soon quit his job with a big law firm, helped lead the legal response to the spill, and eventually joined the faculty at the University of California, Santa Barbara. “When I looked at the oil on the beach, I cried.”

The spill killed thousands of birds and an unknown number of sea mammals. “Hundreds of oiled birds that were still alive were taken to the Santa Barbara Zoo, which is just a few steps from the beach,” NPR recounts. “At the time there was really no place or process to care for the oiled wildlife that was showing up on the beaches,” said zoo director Nancy McToldridge. “So the zoo closed its doors and concentrated its time and energy into taking in these oiled birds, treating them and then rehabbing them back out into the wild.”

The disaster site attracted visits from President Richard Nixon, who apparently stepped gingerly to avoid globs of oil, and Senator Gaylord Nelson (D-WI), who was so moved by the experience that he worked with then-congressional intern Denis Hayes to launch the first-ever Earth Day just over a year later.

“The Santa Barbara oil spill really helped take an issue that was growing and really convert it into legislative action and a whole body of environmental law at the federal level, and also at the state level, that we still have with us today,” said UCSB historian Peter Alagona. NPR says it didn’t hurt that “Santa Barbara was home to a lot of wealthy Republicans who had helped elect Nixon”.

As the anniversary approached, local and state-wide organizations were looking back on the Santa Barbara spill’s lasting impact—on their country’s culture of environmental protection, and on a legal framework that has survived nearly 50 years, much of it brought in by Nixon’s Republican administration.

“You have to imagine a time and a place here on the central coast of California that was known for its beauty, known for its Mediterranean climate and exquisite beaches, and then all of a sudden you have hundreds of square miles of oil up and down the coast,” Sigrid Wright, CEO and executive director of the Community Environmental Council, told The Energy Mix.

“It shocked people. There’s no way anyone could have been unaffected by this,” she said. “For a modern analogy, the closest thing would be some of these major wildfires or some other natural disaster that rips through the community. There’s before the oil spill and after the oil spill. It’s a seminal event for a community.”

“People were outraged about this,” Wright said. “And then immediately, you start to see a few folks asking, well, what’s the alternative? There’s a storyline there, and we still hear it today, that this is the price we pay, an occasional accident or disaster is the price we pay for cheap energy, and it’s actually a false story.” The spill became a catalyst for environmental action and concern that “really seeped into the community consciousness. What came out the other side was a community that was much more ecologically minded because of what this had done to them.”

Wright said the first Earth Day was also a product of its times. Activists opposed to the U.S. war in Vietnam had just developed a new education and protest tool, teach-ins, where people across the country would gather on the same day at the same time to look at a shared issue. When Earth Day took place April 22, 1970, “that’s what happened across the country in various communities,” Wright said. “They held what we would consider now to be modest gatherings. But then, it was a breakthrough.”

While the offshore spill wasn’t the only hot-button environmental issue of the day—this was the era when Ohio’s Cuyahoga River was so polluted it caught fire, and toxic pollution at Love Canal was gathering headlines—Wright said Santa Barbara learned something interesting about the influence it could wield.

“It’s small enough that we can get things done, but at the same time we’re large enough that things matter here,” she said. “When a relatively small group of people decides to take an action or wield influence, things can get done. We don’t get stuck in the large bureaucracy of a city like San Francisco or LA.”

A half-century later, Santa Barbara has just been through the worst wildfire in California history, and responded by setting a 100% renewable energy target.

“It’s worth calling out at this moment of reflection on what’s changed in the last 50 years,” she said. “We still have to remain extremely vigilant, particularly under the Trump administration, with their attempts to reopen federal waters to drilling. And locally, we’ve got a number of really game-changing proposed oil platform projects.”

And yet, “I want to call attention to the fact that we’ve also gained ground. We’re leading in the right ways. When communities like Santa Barbara decide to set a goal to be 100% renewable by 2030, and enough communities do that, it has an impact in much the way the original Earth Day had an impact. These things add up and gain state or national attention, and they give heart to other communities that are looking to do the same.”

Linda Krop, chief counsel at the Environmental Defense Center, cited a list of legal gains that trace back to the Santa Barbara spill, including a state moratorium on new oil and gas leases, a state law prohibiting release of oil in state waters up to three miles offshore, successful campaigns to defeat several offshore oil proposals, and a lawsuit a few years ago that resulted in the termination of about 40 leases.

But some of the immediate response was even more powerful.

“Back in 1969 when the oil spill happened, congress immediately enacted several environmental protection laws,” addressing air and water quality, public health, endangered species, and the need to prevent another oil disaster. Today, Krop noted, much of that body of law is easily adapted to the current crisis: While it would be best to enact comprehensive climate change measures, “we’ve learned to use the laws passed 50 years ago and apply them to climate change.”

Although the battle continues: last year, Donald Trump “issued a proposed leasing plan [3] that puts our entire coast back at risk for more oil and gas development,” Krop told The Mix. “So that’s one of the main cases we’re working on now.”

The Santa Barbara spill also raised public awareness of the fossil industry and its impacts, making the campaigns that began 50 years ago a precursor to today’s focus on climate change and its impacts.

“At the time it was the largest oil spill in U.S. history, and it really woke people up to the dangers,” Krop said. “That’s first and foremost on peoples’ minds when they think about climate change—the dangers of relying on fossil fuels, everything from extracting and processing and refining the fuels to consuming them. It’s the whole life cycle, and none of that can be changed to reduce the climate change impact. It’s really inevitable. When people think about what’s causing climate change, what they think of is fossil fuel production and consumption.”