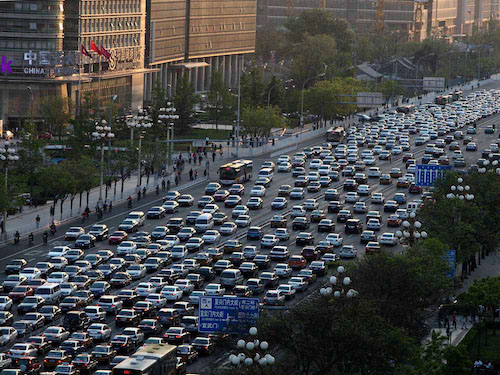 The country’s EV sales were up in mid-2018, even though overall commerce in new cars was declining. Macdonald said he hadn’t expected to see those kinds of numbers until mid-2020, but “now that it has broken, it would be a waste of time for people to ponder whether or not internal combustion engines will make a growth comeback in China. The growth prospects for internal combustion engines are over in China.”

The thing to remember about China, Macdonald noted, is its ability to “maximize and supersize and accelerate changes in its economy and its infrastructure based on policy.” And “China’s current initiative on electrical vehicle adoption, which is just insanely aggressive,” would be “like taking California policy [1] on electric vehicles and turbocharging it.”

Why is that such a significant, potentially disastrous development for Canadian fossils?

“Commodity prices are very sensitive to marginal changes in growth rates,” Macdonald explained. “It’s very important to the oil industry, for Alberta, to have the market expect that demand be at least a little bit higher next year. That keeps the pressure on prices.”

When the EV trend began to unfold in China in late summer, “I believe the global oil market had to start repricing future demand growth for oil.”

The hit was particularly important because “the global oil industry has been living on the prospect of further Asian demand growth,” he added. “And who’s at the cornerstone of that? It’s China.”

The only other country with the capacity to tilt the trajectory of global energy markets, India, has been somewhat supportive [3] of its coal industry, Macdonald added. “But India is now starting to build solar at a very rapid rate, and has an aggressive policy goal [4]” for renewables of 175 gigawatts installed by 2022. The country also announced [5] last week—just two days before CBC posted its interview with Macdonald—that it would add another 500 GW by 2028.

Macdonald pointed to one 675-MW solar development in India to illustrate the advantage renewables can offer the country. “Kamuthi was completed within under a year. Why? Because India was able to hire 10,000 people, and they completed Kamuthi in less than a year,” he said. That matters, because “the faster you get your project completed, and it starts generating useful [energy]

for you, the faster you start getting paid back.”