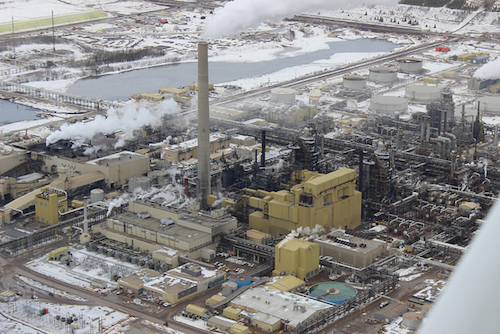 “It boils down to this,” write Vipond, a director of the Canadian Association of Physicians for the Environment, and Keough, board president at the Sustainable Calgary Society. “1) Albertans have become very wealthy by exporting fossil fuels. 2) Scientists state that the climate crisis is an existential threat to civilization. 3) The only way to minimize catastrophic climate change is to immediately decrease our fossil fuel use as quickly as possible. 4) 3 threatens 1.”

Albertans have enjoyed the “geographical fortune” of being able to sell their fossil fuel reserves for “a much higher value than their extraction cost,” earning the highest monthly income in Canada in spite of the current industry downturn, they write. But the province hasn’t come to grips with the “doomsday scenario” that climate change will deliver in our lifetimes without immediate action.

“There is this persistent hope that we here in Alberta will be somehow spared from this fate. We live up in the North, so we’ll just get nicer winters. And the joys of being landlocked is we don’t even have a coastline to deal with as the seas rise. These are false hopes. Of the five most costly natural disasters in Canadian history, three have occurred in Alberta, all in the last decade. And it is going to get much, much worse as temperatures rise. We are not safe.”

The question, say Vipond and Keough, is what to do about it. “Aside from so hopefully-not-serious discussions about evacuating humanity (perhaps only the rich people) to the planet Mars, we are left with Point 3.” The tight timeline for drastic action laid out last October in the IPCC report [2] on 1.5°C pathways “implies a full-on, Second World War-style transformation to a carbonless economy. The majority of these cuts will come from coal, but we definitely need to lower our oil and gas use as well, soon.”

Some Albertans might take relief from the limited climate response to date, with global greenhouse gas emissions on the rise [3] again in 2018 [4]. “But the news is now replete with two kinds of climate stories. The horror stories: whole towns being blown away by hurricanes, people being incinerated in their vehicles fleeing wildfires. And the innovation stories: cheapest wind and solar electricity prices ever, new amazing electric vehicles outperforming old-fashioned cars. At some point, we’ll reach a tipping point [5], and fossil fuel [use] will begin to fall (perhaps rapidly, like a safe climate requires).”

Which connects directly to the threat so many Albertans feel at the slightest mention of a post-carbon transition.

“The ground is shifting rapidly under our feet, and Albertans don’t like it. We want to skate to where the puck used to be. Scrap the carbon tax. Overturn the court judgments. Separate from the nation. Hang the prime minister. All echoes of the same refrain,” they write.

But “outside of our echo chamber, people are getting scared. The climate crisis threatens them and their children, and they have little recourse but to do their own marching in the streets. As people become ever more endangered, on both sides, the rhetoric, and actions, will escalate.”

What’s the worst that could happen? “That we end with Albertans as rich kings presiding over a dead world. But, the optimist in us hopes that Alberta supports the transition and stays relevant in a society that acts to protect itself,” Vipond and Keough conclude. “And that our kids will have a safe climate to enjoy as they grow old.”