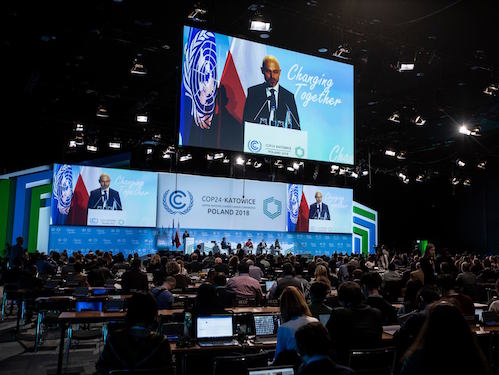 After two weeks of marathon negotiations ended with a deeply equivocal, incremental response to the global climate crisis, COP 24 in Katowice, Poland ended where it began: with a wide spectrum of delegates and other climate specialists declaring that the hard work begins now.

The conference met its lead objective by mostly agreeing on what many observers saw as a watered down version of the detailed rule book [1] for implementing the 2015 Paris Agreement, but falling far short in crucial negotiations aimed at boosting countries’ targets under the Paris deal. A key element of the rule book dealing with international emissions trading was left for further negotiation next year, And many participants were already looking ahead to the next opportunity to boost climate ambition—a summit to be hosted next September by UN Secretary General António Guterres, outside the control of the major East European coal-producing state that chaired this year’s talks and was widely seen as understaffed and too mixed in its own response to the climate crisis to show effective leadership.

“We are driven by our sense of humanity and commitment to the well-being of the Earth that sustains us and those generations that will replace us,” said [3] COP 24 President and Polish environmental official Michal Kurtyka. “Under these circumstances, every single step forward is a big achievement,” he told delegates, “and through this package, you have made 1,000 little steps forward together.”

“In the climate emergency we’re in, slow success is no success,” retorted Durwood Zaelke, president of the Institute for Governance and Sustainable Development. “In an emergency, if the ambulance doesn’t get you to the hospital in time, you die. If the firetruck doesn’t get to your house in time, it burns down.”

But that recognition will next show up on the international stage nine months from now. “Ambition will be at the centre of the climate summit I am convening in September,” UN Guterres tweeted [4]. “It’s time to show strengthened ambition to defeat climate change.”

Negotiators in Katowice “said the agreement was the best that could have been expected given the limited agenda for the talks and the need for a global consensus,” the Washington Post reports. And the COP 24 endgame was about as dramatic as diplomatic negotiations get: after high-level discussions pushed past the scheduled closing time Friday, participants and observers were told the COP plenary would reconvene Saturday at 4:00 AM CET. The timing was pushed to 10:00 AM, then ultimately to 9:30 PM, by which time many participants were already leaving for home.

But after all that, “the agreement fell well short of the breakthrough that scientists—and many of the conference’s own participants—say is needed to avoid the cataclysmic impacts of a warming planet,” the Post states. The deal “adds legal flesh to the bones of the 2015 Paris agreement, setting the rules of the road for nearly 200 countries to cut their production of greenhouse gases and monitor one another’s progress.” But while it “prods countries to step up their ambition in fighting climate change, a recognition of the fact that the world’s efforts have not gone nearly far enough,” the paper adds, “observers questioned whether it was sufficient given the extraordinary stakes.”

The Paris rule book was finalized for now with a big gap—the section of the text dealing with a global carbon trading system was postponed to future meetings after one of the world’s biggest carbon polluters blocked consensus on the measure. “Brazil led a push for lenient rules that other nations said would weaken the system, which is intended to incentivize emissions cuts by creating a market price,” the Post recounts. “With negotiators unable to reach a deal, the issue was punted until next year—a move that Boston College environmental law professor David Wirth said could ‘delay or undermine confidence among the private sector in undertaking climate-friendly investments—one of the most important purposes of the Paris rule book.’”

“World leaders arrived in Katowice with the task of responding to the latest climate science, which made clear that we only have 12 years to cut emissions in half and prevent catastrophic global warming,” said [5] Manuel Pulgar-Vidal, head of WWF’s climate and energy practice. “They’ve made important progress, but what we’ve seen in Poland reveals a fundamental lack of understanding by some countries of our current crisis. Luckily, the Paris Agreement is proving to be resilient to the storms of global geopolitics. Now we need all countries to commit to raising climate ambition before 2020, because everyone’s future is at stake.”

“The majority of the rule book for the Paris Agreement has been created, which is something to be thankful for,” said [6] Christian Aid International Climate Lead Mohamed Adow. “But the fact countries had to be dragged kicking and screaming to the finish line shows that some nations have not woken up” to the urgency of the climate crisis.

That much was clear earlier in the conference, when Polish President Andrzej Duda said [7] climate action was compatible with his country burning coal for another 200 years. Then Saudi Arabia, the United States, Russia, and Kuwait chewed up valuable negotiating time with an ultimately successful effort to obstruct [1] the conference’s whole-hearted acceptance of the landmark IPCC report [8] on 1.5°C pathways.

Now, “world leaders must come to next September’s climate summit in New York being organized by UN Secretary General António Guterres with a clear indication of how they intend to substantially raise their climate ambition by 2020,” said [9] Union of Concerned Scientists Strategy and Policy Director Alden Meyer. “This will be the acid test of how serious they are in their professed commitment to averting a climate catastrophe.”

“The leadership vacuum from those with the responsibility and power to prevent suffering from climate change on a terrifying scale is shameful,” said [10] Oxfam Australia Climate Change Advisor Simon Bradshaw. “We are standing with leaders from the Pacific and other vulnerable regions, communities taking their survival into their own hands, children who will have to inherit this increasingly hostile planet, and all those leading the fight for climate justice.”

“What really matters is getting that political will back home in countries to take the level of action that science demands,” Climate Action Network-Canada (CAN-Rac) Executive Director Catherine Abreu told CBC. In a prepared statement, she added [11] that “the last two weeks have seen plenty of lovely declarations of countries’ commitments to ambition, but precious few specifics on how individual governments plan to respond to the devastating climate chaos of 2018 and deliver the climate action that science demands. Countries like Canada need to follow the leadership of braver, poorer nations who, even in the face of floods and fires, have told the world exactly how they plan to get to a 1.5°C-compatible climate pledge.”

“We should have had so much more,” agreed Greenpeace International Political Director Daniel Mittler. “We’ve had a really terrible year of extreme weather events, of forest fires, and of scientists telling the world that we are running out of time. In the face of that, this agreement is morally bankrupt, it is just not enough.”

“Talks in Katowice once again hinged on long-standing differences between developed and developing countries—respectively, those most responsible for causing climate change and those suffering its most dire consequences,” said CARE Canada Policy and Influence Lead Shaughn McArthur. “The last-minute compromise adopted falls short of the predictable and accountable rule book needed to defend the development gains of recent generations and set the world on a more sustainable pathway. It now falls to countries like Canada to take concrete, ambitious, and transparent actions to demonstrate their commitment to a greener and healthier future that protects human rights, harnesses the power of women and girls, responds to the needs of the world’s poorest and most vulnerable communities, and upholds its obligations under the Paris Agreement and the $100-billion roadmap.”

Canadian Environment and Climate Minister Catherine McKenna touted Canada’s “leading role” in pushing for the carbon markets rule and securing new investments in international climate finance, and CAN-Rac acknowledged that the Canadian delegation showed up well and worked hard on key aspects of the rule book. But Mittler said the country can’t be a credible global climate champion without getting its own house in order.

“[Climate] leaders simply don’t buy and build pipelines. Climate leaders go for a just transition as the science suggests we need it,” he said. Ottawa “is making the right steps in some ways—for example, getting rid of coal—but they’re simply not credible as long as they own and build pipelines and expand fossil fuels when the science has been very clear.”

“Citizens all over the world have been out in the streets demanding ambitious climate action from our governments,” added Équiterre Executive Director Sidney Ribaux. “Negotiators and ministers must now go back home to their citizens and show them that the progress that has been made at COP24 will translate into concrete action to protect our world for future generations.”