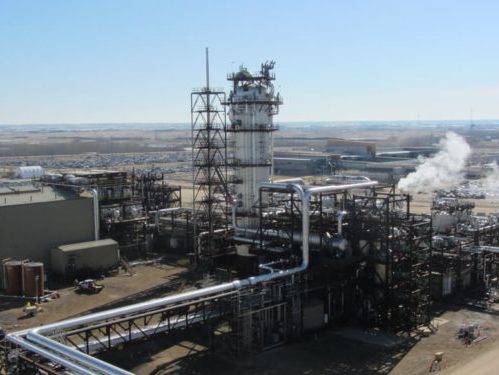 One of the countless side discussions at this year’s United Nations climate change conference in Katowice, Poland focused on the growing acceptance that some method of capturing carbon dioxide—from the atmosphere, or at the point where it’s first emitted—will be necessary to keep average global warming within 1.5°C.

“Carbon removal is now a thing,” said Julio Friedmann, a senior research scholar at Columbia University’s Center on Global Energy Policy. “It was not on anybody’s agenda. Now it’s front and centre.”

Friedmann, who served as the U.S. Department of Energy’s principal deputy assistant for fossil energy in the Obama administration, said carbon capture costs have fallen 60% over the last decade. “We are poised to see that cost get cut in half or more again in the next five or 10 years,” he said.

Until now, carbon capture has drawn little interest, “and for good reason,” the Washington Post reports. “Most methods of carbon capture used too much energy and cost too much money. With the exception of pumping carbon dioxide into old wells to enhance oil recovery, carbon capture also had no compelling commercial application.”

But now, “a growing sense of desperation about the state of the climate has people taking a harder look at carbon capture.”

“As we look out to the middle of the century, one thing is very clear: Going to net zero [emissions] will require carbon capture and storage on a substantial scale,” said renowned climate economist Lord Nicholas Stern, chair of the London-based Grantham Research Institute. “And we’re going to need it quite soon.”

“It is one of—and I stress, one of—the necessary technologies to address emissions and to slow the rate of change and, ultimately, achieve that objective from the Paris Agreement of net zero emissions,” said Global CCS Institute CEO Brad Page. “We’re going to need every single technology we can get our hands on.”

The Post traces the limited success with CCS so far, including failed projects [2] in the United States that were tripped up by a combination of difficult technology and poor economics. Page said the 18 carbon capture plants currently in operation around the world have capacity to draw down 40 megatonnes of CO2 per year—a “not insignificant” capacity, the Post notes, but 1/200th of what would be needed to avert the worst impacts of climate change.

But Stern expressed optimism for the technology. “It is a big expansion, but of course we have seen quite phenomenal expansions elsewhere, very good ones in solar and wind and so on,” he said. “But these things happen only if you pursue them, only if you invest now.”

“It is a big expansion, but of course we have seen quite phenomenal expansions elsewhere, very good ones in solar and wind and so on,” he said. “But these things happen only if you pursue them, only if you invest now.”

When one participant at a side event in Katowice asked about the potential risks of storing carbon, Stern replied that CO2 in the atmosphere “is far more dangerous than the carbon dioxide underground could ever be.”