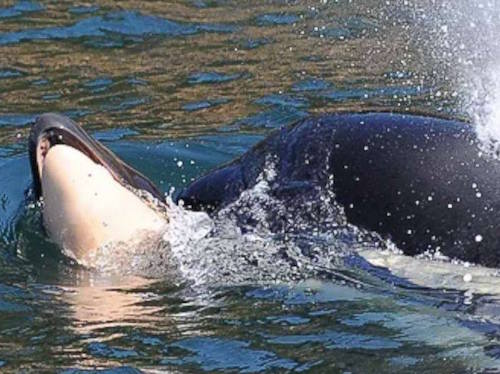 The federal government is adopting a C$61.5-million plan to curtail noise pollution, increase food supplies, and reduce water-borne contaminants in a bid to protect the 74 remaining members of the Southern resident whale pod in the Salish Sea off Canada’s west coast.

“The good news is that the government wants to make tangible changes before May. We’ve never heard them say that before,” said Christianne Wilhelmson, executive director of the Georgia Strait Alliance, which has been calling for immediate action to protect the orcas since the early 2000s. “That seems to be a recognition that they’re on a timeline.”

“British Columbia’s iconic Southern resident killer whales capture our imagination,” Wilkinson said. “Orcas are powerful predators known for their intelligence and their inquisitiveness. Most of us admire their highly developed acoustic skills, which they use to hunt, to navigate, and to communicate with each other.”

But for all of that fascination, the Southern resident pod’s population has fallen from 83 to 74 since 2003, writes reporter Holly Lake. No newborn calf has survived in nearly three years, 69% of pregnancies fail, only 23 females are of reproductive age, and the pod has recently shown signs of being nutritionally stressed.

“That’s science-speak for starving,” Wilhelmson told the House Fisheries Committee earlier this week. “We have a species in crisis, and immediate and bold action needs to be taken to save it. The science is clear, and the path to save these whales is laid out even more clearly. The loss of an apex predator is a house of cards we do not want to experience.”

The Southern resident killer whales have been on Canada’s endangered species list since 2003, iPolitics adds, but Wilhelmson said the threats to the pod have likely been increasing ever since. In September, the Georgia Strait Alliance and several other groups filed suit to force more rigorous action by Ottawa.

“The emergency order we’ve been asking the government for is a tool that would help them do this faster,” she said. “Their reluctance to use it is a concern.”