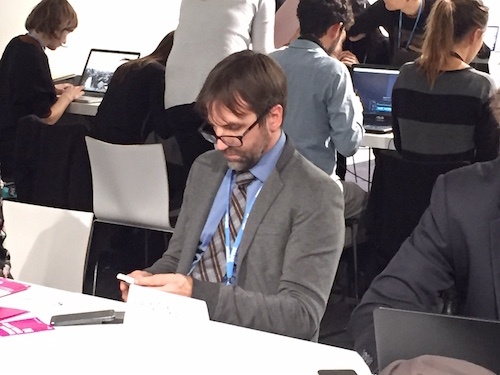 Veteran environmentalist Steven Guilbeault announced earlier this month that he is stepping down as senior director of Montreal-based Équiterre, the organization he co-founded with Sidney Ribaux in 1993 and helped build into one of Quebec’s most prominent conservation and climate advocacy organizations.

“Over the past 25 years, I have never been very far from Équiterre, and this decision was one of the hardest that I’ve ever had to make,” Guilbeault told media [1] in a prepared statement. “I made the very hard decision to leave ,” he added [2], “not because I don’t like working at Équiterre, not because I don’t love the people who are here. I wish to explore some new elements of the fight against climate change.”

He’ll be working on a book on the role of artificial intelligence in the climate fight, and continuing his work as strategic consultant with Montreal-based Cycle Capital Management. “We’ve seen, over the last few years, more and more people within the investment community talk about the important role they can play in the fight against climate change,” he said.

“One of the best-known figures on Quebec’s environmental stage due to his work with Équiterre and Greenpeace Quebec, Guilbeault has been nicknamed the “Green Jesus of Montreal” by La Presse,” National Observer reports [4]. “On the international stage, French newspaper Le Monde listed him among the world’s 50 leading actors in the field of sustainable development in 2009.”

Guilbeault spent 10 years at Greenpeace as provincial director and campaign manager, but returned to Équiterre in 2007.

“Steven is a powerful force in the Canadian environmental movement,” Ribaux said. “I console myself in thinking he will still be part of this great movement to accelerate the shift toward a green and sustainable society.”

Beginning as a small group of activists, Ribaux and Guilbeault built Équiterre “into one of Quebec’s most prominent conservation groups that now counts 22,000 members, 200 volunteers. and 50 employees,” Observer notes. “Their organization has consistently been on the front lines of activism shaping public policy. Most recently, it is known for efforts to crack down on harmful pesticides such as neonicontinoids and promote action on climate change, including recent battles to electrify the province’s transportation network and to stop the proposed Energy East pipeline, a project that was eventually abandoned [5] in 2017 by Calgary-based energy company, TransCanada Corporation.”

At the landmark United Nations climate change conference in Paris in 2015, one federal official singled Guilbeault out as the participant with whom she would welcome a selfie to send home, in the same year that newly-elected Prime Minister Justin Trudeau was generating more than a few triumphant selfies of his own.

The October 12 news conference quickly turned to questions about his future in elected politics, following rumours that he’d been seen enjoying a meal with Trudeau Principal Secretary Gerald Butts. Those sources said Guilbeault might be tapped as the Liberal candidate in the upcoming byelection to fill former NDP leader Thomas Mulcair’s seat in the Montreal riding of Outremont.

Guilbeault acknowledged that he’d been approached by more than one party, but said his name won’t be on the ballot—this time around.

“I have affinities with a few parties in Ottawa,” he said. “Namely those that believe that climate change should be a priority. I have less affinity with the party that doesn’t think so.”

Global News says Guilbeault “has not ruled out running in the next federal election, which is scheduled for October 2019.”

1 Comment To "Guilbeault Steps Down from Équiterre, Plans Book on AI and Climate Change"

[…] decision will surprise few political observers in Quebec, who have speculated for months about his political intentions,” CBC reports. The news caps a week in which the federal […]