One week ago, the price American refineries will pay for a barrel of Alberta bitumen fell to just below US$30. A seismic jolt raced through the tar sands/oil sands industry, because that price would barely allow even the biggest, most profitable operators to recover operating costs.

A second, much stiffer financial blow came in the next four days. The price Canadian bitumen can fetch plunged another US$10 per barrel, hitting US$19.19 before recovering to about US$23. This means any pending new tar sands/oil sands mine would face the prospect of losing US$50 or more on every barrel sold.

If that price prevails, every existing and planned tar sands/oil sands project will be a dead mine walking. Why has it fallen so far, so fast, from a yearly high of US$56 per barrel?

Oilpatch operators, politicians, and many business press commentators have almost unanimously cast climate and First Nation activists as villains for their role in challenging planned pipelines that would allow an additional 1.5 million barrels of bitumen to be mined and exported every day.

This assumes the price per barrel would rise dramatically if western Canada produced 4.5 million barrels per day (bpd) of bitumen, rather than the current 2.8 million bpd. The pipeline stalling tactics, one Business News Network (BNN) commentator claimed, have led to some C$40 billion in lost oil revenues, Alberta government royalties, and federal taxes.

But it is impossible to forfeit income that is strictly mythical. Wealth does not exist until it is created. A barrel of bitumen has zero value if there are zero purchasers.

In reality, virtually every refinery in America that buys heavy crude is operating at full capacity. That is why there are no buyers willing to pay higher prices. And there are no announced plans to build more of the large delayed cracking units (cokers) which are needed to process the gunky, sulphurous, and contaminant-laden heavy oil. 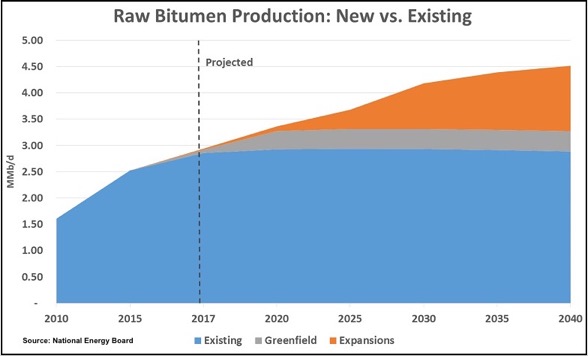 In fact, Canada already mines more far bitumen per day than U.S. refineries can handle. The biggest U.S. refineries in Texas with coker units also purchase comparable heavy oil from Mexico (700,000 bpd) and Venezuela (560,000 bpd), and heavy oil wells in California and imports supply coastal refineries there at a rate of 460,000 barrels per day. Only if all these suppliers were knocked out of the market would Canadian bitumen production of 2.8 million bpd match U.S. coker refinery demand. So there is a net heavy oil surplus of 1.1 million barrels per day, and it is building fast.

This is why the pending Keystone XL and Trans Mountain pipelines are being pitched as conduits for unrefined bitumen exports to Asia, to be shipped from ports in the Gulf Coast and Vancouver. And this explains why the price of Alberta bitumen has plunged: bitumen supply far exceeds available refinery capacity and demand on this continent.

Despite this reality, mammoth new tar sands/oil sands mines have come into production in Alberta during the past year, and more are in the approval queue. Even at a Western Canadian Select (WCS) crude oil price of US$60 per barrel, recently opened mines like Fort Hills and Kearl will barely break even. To meet operating costs and garner significant profits, proposed mines like Teck Resources’ Frontier project will need the WCS price to climb to an estimated US$140 per barrel.

These oil majors saw no prospect of U.S. refineries spending billions to build new coker units that would take decades to pay off, or of bitumen prices coming anywhere close to parity with Texas or global benchmarks.

The reason for that exodus, and these glaring supply/demand market facts, should be obvious to every oilpatch CEO, every conscientious politician in Alberta or Ottawa, and competent business reporters covering this sector:

In short, due largely to explosive output from the Permian Basin shale formation, America is awash in every form of crude, including heavy oil. Storage tanks are brimming. Net imports are declining. Refineries are running flat out, and their profit margins are stratospheric. There is a surplus of refined gasoline, and pump prices have dropped below US$2 per gallon.

So additional Alberta bitumen (beyond about 2.8 million barrels per day) has nowhere to go in America. There are scant places to even store it there. Most fatally, there are few refiners willing to buy more barrels unless they are sold at a loss by Alberta oilpatch producers.

That leaves Asian refineries as the only prospective ‘Hail Mary’ outlet for some potential 1.5 million extra barrels per day of Canadian bitumen. If the proposed Keystone XL pipeline (830,000 bpd) and Trans Mountain extension (600,000 bpd) were built and entirely dedicated to bitumen exports, the demand/supply match might be optimal.

But those two new pipelines would remain empty unless Asian refiners paid the newest tar sands/oil sands operators upwards of US$100 per barrel for decades, and there were no global rivals which could beat Alberta bitumen on quality, price per barrel, and lower ocean tanker shipping costs.

On every count, as we’ve reported previously, Canada has scant hope of competing. Saudi Arabia, the U.S., Russia, Iraq, and even Iran already have a formidable head start in locking down future oil sales in Asia, and delivering barrels at a far lower cost.

Saudi Arabia began mapping out plans to maximize market share in countries like China, India, and Malaysia a decade ago. They started with a pair of aces: the largest reserves of high-quality, low-cost crude on the planet, and ocean ports from which to send oil-laden supertankers.

But they added another strong card by pro-actively seeking partnerships to co-finance and build huge refineries in or near the biggest Asian oil-consuming countries. The deals locked in stable sales or oil supplies for each party, and the planned tidewater refineries are to be located adjacent to petrochemical complexes. That means Saudi crude can be converted into the highest-value products, or those vital to developing industrial economies.

The first of these giant refineries, in Malaysia, has just received an inaugural, two-million-barrel shipment of Persian Gulf crude. It is designed to process 300,000 barrels per day, with which to make petrochemical feedstocks and low-sulphur marine and vehicle fuels that will meet pending emission limits. Similar Saudi-backed refineries are slated for India, Pakistan, South Korea and China.

It is an astute business model that locks in key long-term oil customers for the kingdom. It also offers state-owned Saudi Aramco the prospect of sustained, shared profits, since the refinery margins can be maximized by using cheap oil to make high-value products.

It is a ruthlessly competitive arena for any new entrant, but particularly Canada, because the tar sands/oil sands are landlocked, far distant, low-quality deposits. Most fatally, because of the chemical properties of bitumen, it is among the most expensive to mine, pipeline, upgrade, and refine.

For a stark comparison, Saudi Aramco controls reserves estimated at 268 billion barrels of mostly premium oil within the desert kingdom which can currently be drilled and tapped at a cost of less than US$10 per barrel. When for pipeline and shipping costs from Vancouver or the Texas Gulf are factored in, there is almost no prospect of Canada beating global rivals like Saudi Aramco to significant Asian sales for the foreseeable future. If, as OPEC predicted last week, global oil demand will soon recede, Canada’s export prospects will be even bleaker.

Even the most ardent climate activists should not cheer the looming loss of Alberta oil sector jobs, and provincial royalties, which will inevitably occur if the WCS price stays below US$30 for a sustained period. Doing so would be shameful. Innocent people will be hurt badly. Families will be dislocated. Personal and provincial government debts will increase. Spending on hospitals and schools will go down.

But nor should tar sands/oil sands advocates, politicians, and the business press blame climate activists or Indigenous peoples for the plunging price of bitumen.

That, too, would be shameful, because it is oil refinery managers (and their software algorithms) which solely decide how much bitumen to buy, and what price they will pay per barrel. It is doubtful they rely on Indigenous leaders or Greenpeace for related advice.

Currently, those refineries in the U.S. which can process heavy oil from Canada, Venezuela, or Mexico are running at full capacity. They know, down to the barrel, what a formidable bitumen surplus is building in western Canada. Moreover, they are now buying surplus premium Permian Basin shale oil, at discount prices, to heavily dilute bitumen volumes normally used in cokers. This double-discount blend is the cheapest way to make low-sulphur marine and diesel fuels, while spiking refinery capacity factors and profits to as much as 56%.

So U.S refineries are pitting supplier against supplier, even country against country, to drive down prices to rock bottom, then buying and building stored inventories to maximize future margins. Why take the risk of ruining a great racket by building more U.S. coker capacity? In Asia, Saudi Arabia is well advanced in replicating this merciless market dominance, except it will use its own low-cost, premium oil as the primary refinery feedstock.

Given this reality, Alberta’s least bad option is to face the facts squarely and recognize that further expanding the tar sands/oil sands will inevitably be a zero-sum experiment with agonizing, self-inflicted economic damage.

No refineries in America, Asia, or Europe are likely to be new customers. Demand projections higher than the nearly three million barrels per day now in production should be accompanied by Twilight Zone theme music. Or Chopin’s Funeral March. No new mine projects are viable, so a moratorium on new permits is justified as a matter of fiscal prudence.

This remedy may amount to heresy in the western Canada oilpatch, but it could actually boost the WCS price modestly as U.S. refiners burn through inventories, in which case the damage would not be immediate or catastrophic. For now, tar sands/oil sands output and employment would remain the same. Those would gradually diminish, but conventional oil and natural gas production and jobs would remain for decades.

The alternative is to accelerate down a road to fiscal ruin, while defying dire warnings from esteemed climate scientists and forcing other provinces to make up national carbon budget shortfalls pledged under the Paris climate accord.

It is time for oilpatch executives to stop promising that more pipelines will perform miracles, and for provincial and federal politicians to stop promoting what reality will not deliver. No one can compel the largest coker refinery in North America to buy even bigger volumes of bitumen when it is already at full capacity, and fully owned by Saudi Aramco. No U.S refiner will spend billions to build a new one, just to enable Alberta’s fiscally reckless ambitions. Nor will rivals in Asia, unless they can buy bitumen for decades at liquidation sale prices.

Facts matter more than ever, even if they are painful. So does honesty from the elected officials citizens entrust with their futures. On both the fiscal and climate crisis fronts, anything less amounts to merely whistling past the graveyard.