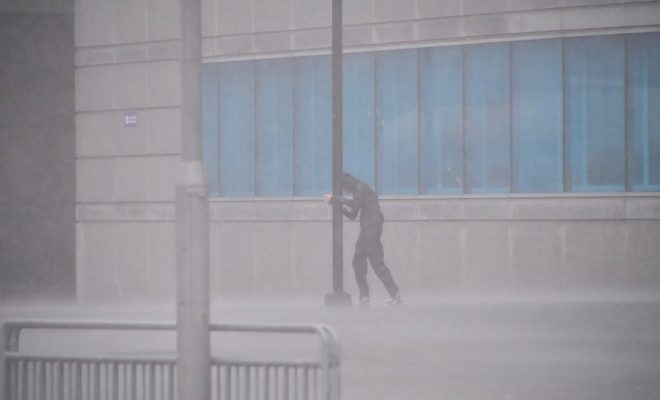 At least 64 people [1] are dead after 550-mile-wide Typhoon Mangkhut tore through the northern end of the Philippine island of Luzon, uprooting trees and setting off landslides and floods. But officials were at least tentatively relieved that the impact wasn’t even worse after the region sustained the world’s most powerful storm so far this year.

“The initial casualty toll was far lower than officials had feared in the days before the storm made landfall early Saturday on the Philippines’ largest and most populous island,” the New York Times reports. “The typhoon, with wind speeds reaching 170 miles an hour before reaching land, could have caused far more damage if it had hit Luzon farther south and closer to Manila—a megacity of more than 12 million people. The capital was hit by heavy rain and strong winds, with trees uprooted and flooding in some areas.”

The confirmed death toll “is almost certain to rise as people begin assessing damage from the typhoon. But if the numbers are limited, it will be, at least in part, a testament to the preparedness of authorities following disastrous storms in recent years”—including Typhoon Haiyan, which killed more than 6,000 in the central Philippines in 2013.

This time around, authorities moved more than 105,000 evacuees to temporary shelters before the storm hit.

Still, “it could be days or weeks before the storm’s true human toll is known,” the Times adds, with flooding, road closures, and cell phone outages hampering communications. “At this stage, it is still too early to understand the full impact of the typhoon,” said Gina Maramag, Philippines spokesperson for the United Nations Office for the Coordination of Humanitarian Affairs. “Early indications suggest that the prompt evacuations made by local authorities have mitigated the impact on civilians.”

But “it will also take time to assess how much damage was done to the country’s prime agricultural region and to the economy,” the Times cautions. “Damage to farms could be extensive—and costly for the nation. The region is the country’s largest food producer, and the destruction of crops could lead to food shortages, higher costs, and inflation.”

A day later, Mangkhut made landfall in southern China and Hong Kong, bringing heavy rain to densely-populated cities with populations in the millions, the Washington Post reports [1].

In Hong Kong, “buildings swayed as sustained winds of about 96 miles per hour continued to slam against them,” the paper notes. “Residents hunkered down in their apartments, and streets in the usually buzzing city were deserted Sunday. Videos shared widely on Twitter and WhatsApp chat groups showed initial damage to some of the city’s towering and closely packed buildings. In one, at least a third of the tower’s windows had been blown out, scattering debris all around, and in another, a construction elevator shaft collapsed dramatically at a construction site in Mongkok.”

The Hong Kong Observatory issued a landslide warning and instructed residents to stay away from steep slopes—as well as the city’s harbours, “where storm surges have caused the water level to rise dramatically,” the Post states. “Remain where you are if protected and be prepared for destructive winds and the change in wind directions,” the Observatory warned.