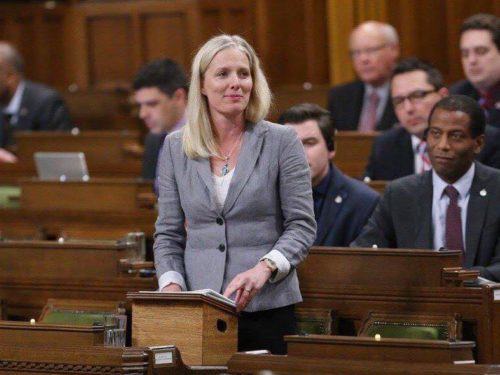 Provincial governments that fail to meet the terms of the pan-Canadian climate plan, including putting a price on carbon that corresponds to the federal floor price, should not expect a share of the C$2-billion federal low-carbon fund, Environment Minister Catherine McKenna said earlier this week.

“You need to commit to our climate plan. It includes recognizing there’s a cost to pollution. That is a key element to it,” she said.

Ottawa launched a review [2] of the $420 million Ontario was due to receive under the plan, after the Ford government rescinded the province’s successful carbon cap-and-trade plan. “McKenna wouldn’t say Wednesday if she has made a decision about Ontario’s share, saying only that the federal government is committed to providing money from the fund to those provinces that show a commitment to seriously tackling climate change,” The Canadian Press reports. “Provinces have until the weekend to submit their climate change plans for federal scrutiny, and a failing grade will lead to Ottawa’s imposition of a carbon price on that province.”

While Ontario has trashed its climate strategy and New Brunswick’s Conservative Party opposition is making it a campaign issue, McKenna said most provinces are stepping up to the pan-Canadian plan—and they can expect the Trudeau government to stand firm.

“There’s no backing away from climate change,” she said. “We are absolutely all in when it comes to taking climate action.”