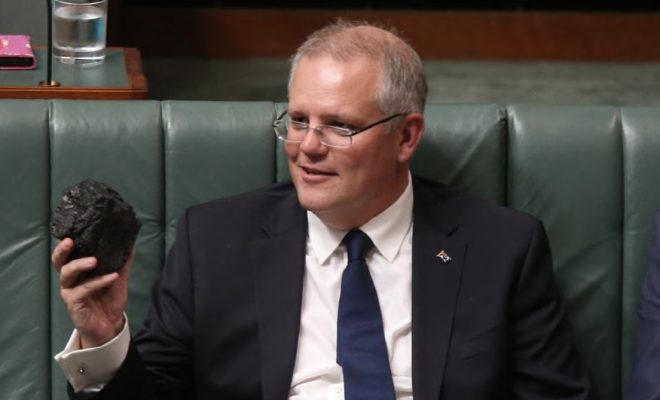 Observers say Turnbull’s rule was burned to the ground by deliberations over climate change, just days after he abandoned Australia’s emission reduction targets in a last-ditch bid to hold on to power. The New York Times adds [2] that many Australian citizens “complained this week that their leaders were too focused on political machinations at the expense of more important issues, including a drought that has wreaked havoc across the country for months [3]. Mr. Morrison called the record-breaking drought the country’s ‘most urgent and pressing issue’ and promised to make it his top priority.”

The Times reports that Turnbull’s defeat came after months of negotiations over the National Energy Guarantee (NEG) [5], a plan to reduce electricity prices while cutting greenhouse gas emissions that had earned the wrath of renewable energy producers for its inattention to new investment. When the far-right former home affairs secretary Peter Dutton mounted a challenge to Turnbull’s leadership, Morrison stepped up as a less divisive alternative. Energy and Environment Minister Josh Frydenberg was subsequently named deputy leader.

Just days before his resignation, Turnbull had announced he was abandoning the NEG, claiming it lacked the votes to pass the Australian House of Representatives. “We are not going to propose legislation purely for the purpose of it being defeated,” he said [6] Monday.

But critics said the measure had support from other political parties, and Bill Shorten, leader of the opposition Labor Party, appeared in a field of solar panels to call Turnbull a “hostage to the right wing of his party” and assert that his caucus had been ready for a bipartisan compromise.

“We’ve got our best hieroglyphics interpreters out trying to understand the merchant bankers’ gobbledygook policy this morning,” he said. “When they’ve got a position, come and talk to us.”

RenewEconomy concluded [7] that “the removal of a legislated emissions target makes a mockery of what the NEG was supposed to be about—a first-ever combination of climate and energy policy, of emissions and reliability. It was supposed to be a policy that crossed party lines; instead, it could not even be agreed on by the Liberals.”

Other discussion connected the policy collapse to “Australia’s vulnerability to climate change and its effects, from extreme drought [3] to bleaching of the Great [8] Barrier [9] Reef [10],” the Times noted.

“All it does is reconfirm that they have no interest in doing anything about climate change or the Great Barrier Reef, really,” said James Cook University coral reef scientist Jon Brodie.

The Guardian asserted [11] that Australia’s Liberal Party was “self-destructing over energy”, adding that energy policy has been a “constant kryptonite” for past prime ministers Kevin Rudd, Julia Gillard, and now Turnbull.

Australian National University lecturer Jill Sheppard described Morrison as one of the most conservative members of the Liberals’ moderate wing, adding that “he has managed to straddle factions in the Liberal Party really nicely in the last couple of decades.” Other analysts said that kind of analysis only showed how far Australia has veered to the right. Several news reports remembered Morrison as the federal treasurer who brought a lump of coal—neatly lacquered by the Minerals Council of Australia—into the national parliament in February last year.

“But we were,” RenewEconomy recalls. “In doing this, Morrison was pinning his colours to the mast of energy policy idiocy of the sort you find in the Murdoch media and on talk back radio, and on the front and back benches of the [Liberal-led] Coalition.”

“It says something about the state of Australia’s politics that the new prime minister, the man who brandished a lump of coal in parliament, is considered a moderate, at least in comparison to the forces he beat to the job,” RenewEconomy notes [12]. “At first glance, the emergence of Morrison may be a relief for the renewable energy industry in Australia—because it is clear that Dutton may have led Australia out of the Paris climate agreement and even brought renewable energy schemes to a crashing halt.”

But “it may not be cause for celebration. Morrison will lead and will have as his deputy Josh Frydenberg, the man who put together the National Energy Guarantee that proposed no new investment in wind and solar for a decade.”

Now, the close result of a three-way race to lead the governing Australian Liberals suggests the party is still deeply divided.

“There appears no end in sight to the civil war consuming the ruling Liberal-led coalition government,” The Guardian reports. “The country may be headed to an election, with Turnbull saying he will not stay in parliament. His resignation in between general elections would erase the government’s single-seat majority in the House of Representatives.”

With the National Energy Guarantee dead, Victoria Renewable Energy Advocate Simon Corbell says [13] the next step is for Australia’s state and territorial governments to take the lead on energy policy. The NEG’s failure highlights “the failure of the national arena to implement and sustain a policy setting that addresses the energy trilemma of an affordable, reliable, and sustainable electricity sector,” he writes for RenewEconomy.

“A key characteristic of renewable energy development is its distributed, decentralized form,” a feature that disrupts traditional electricity systems and political systems alike. But “in the Australian federation, the states and territories have responsibility for energy policy,” he notes. “Forward-looking jurisdictions have their own state- and territory-based renewable energy targets, and many states also have their own emissions reductions targets.” While the sub-nationals’ performance has varied, jurisdictions like Victoria and Queensland have been “influential and effective”, while South Australia’s work with the Tesla mega-battery [14] has made it an innovator in energy storage.

The coal-dependent state of New South Wales has already been subject [16] to rolling blackouts. And after South Australia’s epic power failure in 2016, the national government tried to blame [17] the state’s renewable energy capacity, before it became clear that coal plants were at the heart of the problem—and that the new mega-battery could respond [18] to sudden spikes in power demand faster than any other option.