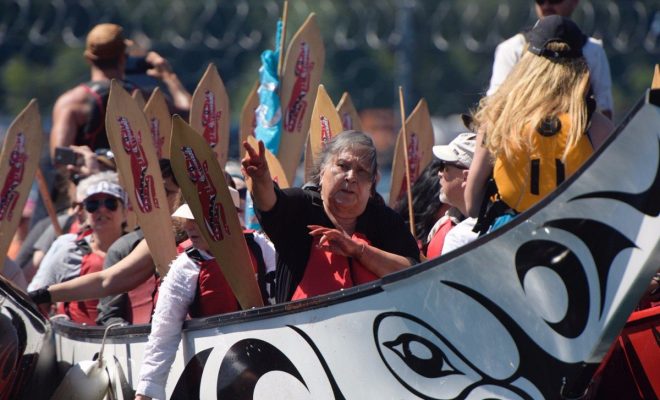 Indigenous Elders participating in the flotilla held a traditional water ceremony at the terminal fence with drumming, singing, and prayer, the Star Vancouver reports [2].

“Today’s very important for us to continue showing why we’re all here, protecting our ceremonies, and bringing back to our culture our teachings that’s been with us for centuries,” said Will George of the Tsleil-Waututh First Nation, one of the organizers of the event.

A Greenpeace ship, the Arctic Sunrise, was originally set to join the flotilla, until it ran into unexpected fees from the Port of Vancouver. The Star Vancouver says the captain and crew still participated in inflatable boats.

“Even though we don’t have the ship, we completely support the First Nations and the community to stop the Trans Mountain pipeline,” said ship captain Joel Stewart. “Besides the fact that expanding the tar sands output and the pipeline is a climate time bomb, and just something we have to stop, it can go to wind turbines, light rail, or public transport. It’s time to stop the pipeline, stop fossil fuels, and time to clean up the Salish Sea.”

National Observer carried a letter to the editor from Farid Iskandar, a volunteer from Alberta Premier Rachel Notley’s most recent provincial campaign who became one of 12 protesters forming a “human drawbridge [4]” in early July to block a tanker from the Burnaby terminal. “I believed in her vision for Alberta,” Iskandar wrote [5]. “I slowly became disillusioned by her decisions, especially when she decided to put all of her political eggs in the basket of a Texan oil company.” Observer columnist Nora Loreto, commenting on Greyhound bus line’s recent decision to cancel all its routes west of Sudbury, Ontario, asked pointedly [6] whether Canada would “rather move steaming piles of bitumen, or people”.

Meanwhile, documents filed by Kinder Morgan with the U.S. Securities and Exchange Commission (SEC) revealed [7] the Texas-based pipeliner originally asked C$6.5 billion to sell the Trans Mountain project, and Canada originally offered $3.85 billion to buy it, before they settled on the final buyout price of $4.5 billion. That figure excludes $325 million in federal capital gains tax that Kinder will be expected to pay at the end of the year.

Once negotiations had played out and Canada’s $4.5-billion buyout was on the table, the Kinder Morgan board “urged shareholders to accept the offer, since the alternative was take a $1 billion write-off (money already spent or committed on the expansion) and simply cancel the project,” reports [8] industry newsletter JWN Energy.

The filing also sheds light on how panicked Kinder Morgan became when the B.C. government asked for a court reference to test its right to regulate the environmental safety of the company’s operations. The Financial Post details Kinder’s complaints at the time, both against the John Horgan government and the Burnaby city government. JWN Energy recalls that Alberta also offered a $2-billion “backstop” to cover unavoidable cost overruns on the project, but Kinder was concerned “that a financial backstop would not…provide any clarity with respect to the ability to construct through B.C.,” the SEC filing stated.

But now, it’s a different world for Kinder Morgan, with fossil-watchers waxing ecstatic about the company’s upcoming business prospects [all brought to you courtesy of Canadian taxpayers—Ed.]. The company is building [9] a 9,100-mile natural gas pipeline from Texas’ Permian Basin, while analysts on the Seeking Alpha investment blog point to its immediate prospects for reliable, low-risk growth.

“Getting rid of the Trans Mountain project allows Kinder Morgan to focus on other, more attractive projects,” writes [10] blogger Jonathan Weber. “Capital and labour that has been freed up can be deployed towards smaller, less problematic investments where the return on investment is higher and where the point in time when the project starts positively impacting Kinder Morgan’s bottom line is closer.”

“Kinder is getting back into growth,” agrees [11] a high school teacher and MBA blogging as Long Player.

“Not only is Kinder Morgan looking at growth, but it is also looking at low-risk growth,” s/he writes. “After all that time and effort on a project that ended up as a sale before it was complete, now it is back to basics. There are plenty of low-risk projects that can complete quickly with a minimum of government interference. The need for a blockbuster project like the Trans Mountain expansion project just is not great enough to cover all the challenges entailed. Therefore shareholders can expect lower risk, less complicated projects in the future. That should make future price appreciation far more predictable.”

Kinder Morgan are a pack of rats leaving a sinking pirate ship and taking all the treasure with them.
Morneau and Trudeau were like novice Texas Hold’em poker players where the KM pros all looked for the suckers to fleece for easy money and the two ‘new’ guys can’t find one because they’re the suckers.
Problem is, they were ‘playing’ with our money without our permission. They will be gone in 2019 but our debt will go on for generations and the ‘new’ Trans Mountain pipeline will never be built.
Voting them in to office was not our intent to give the Liberals a free reign. We really just voted against Harper to avoid getting into this mess.
I guess you really have to be careful about what you wish for because even if you get your wish you might just end up getting what you were trying to avoid.
If either Trudeau or Morneau had half the economic savvy of their fathers they would have done their homework and learned how shady KM really was and run like hell from ever dealing with them.