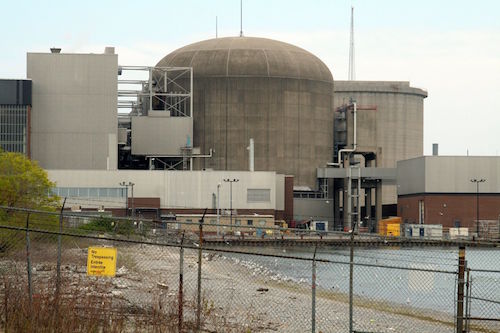 Doug Ford’s new Progressive Conservative government in Ontario continued to flail away at the province’s efforts at an energy transition last week, with new moves that risked C$100 million in ratepayer costs for a cancelled wind farm, undermined renewables supply chains by cancelling 758 smaller projects, and put municipal cycling infrastructure at risk as funds from the previous government’s carbon cap-and-trade program begin to dry up.

Meanwhile, key advocacy organizations before the Canadian Nuclear Safety Commission are warning that Ontario Power Generation’s proposal to extend the life of the aging Pickering nuclear station beyond its scheduled August 31 closure date could put millions of people at risk of a nuclear accident.

On Tuesday, Conservative house leader Todd Smith announced [2] the government was cancelling the White Pines Wind Project in Prince Edward county, in Smith’s home riding, just a couple of months ahead of completion. “The company said it was caught flat-footed by the news and only found out about its death from a reporter,” reports iPolitics [subs req’d].

“We are shocked by the news,” WPD Canada President Ian MacRae responded by email. ‘The White Pines Wind Project has been under development for 10 years and is nearing the completion of construction (today there were over 100 workers on site).”

The project faced local opposition, but received final approval from Ontario’s Independent Electricity System Operator (IESO) in May, in what MacRae described as a “housekeeping document” attesting that the company had met all its regulatory obligations. The new government framed the approval “as a breach of the convention that governments avoid big decisions during elections,” iPolitics states.

“This project was quietly granted a Notice to Proceed in the middle of an election campaign when government was supposed to be functioning in a caretaker capacity. This breaks with convention in how government operates in an election period,” wrote Ford spokesperson Simon Jefferies.

“Gas Plant 2.0 immediately comes to mind, as the motivation seems to come from the local MPP and is clearly a breach of the contract,” he said, referring to the former Liberal government’s billion-dollar decision to cancel two natural gas “peaker” plants when they were already under construction. He also warned the cancellation could land in court, at which point “the ratepayer will be on the hook for well in excess of $100 million.”

Then on Friday, Energy Minister Greg Rickford said [3] the province would walk away from 758 contracts for smaller renewable energy projects, claiming the move would save ratepayers $790 million. Industry officials disputed the figure, “saying it will just mean job losses for small business,” CBC reports.

“For 15 years, Ontario families and businesses have been forced to pay inflated hydro prices so the government could spend on unnecessary and expensive energy schemes,” Rickford said. “Those days are over.”

“This is not about big business,” he told CBC. “This is about small rooftop projects that are owned by farmers and school boards and municipalities and First Nations groups. The folks that will be hurt are the installers and contractors and the engineers: the local guys, the little guys who have built up experience in building solar over the last few years.”

He said the cancellations wouldn’t help bring down hydro costs, since the government hadn’t paid any money to the companies, and predicted lawsuits in Ontario’s immediate future. “This would not even have registered on the electricity bills of Ontarians,” he said. “It’s just a lose, lose, lose situation here, resulting from acting before thinking.”

NDP energy critic Peter Tabuns said the cancellation would cost thousands of jobs across the province and endanger air and water quality. “Mr. Ford’s war on science and the environment may be pleasing his friends in back rooms and fulfilling promises he made to social conservatives that supported his election bid,” Tabuns said. “But for the rest of us, it’s going to means lost jobs, billions of dollars wasted, and tangible environmental damage.”

“These types of contract cancellations expose Ontario to significant financial risk,” added Green Party leader Mike Schreiner. “On top of that, they’re sending a message that Ontario’s not a safe place to do business. What company wants to invest in a province that just rips up contracts without any notice, without any due process?”

In the wake of the announcement, the Ottawa Renewable Energy Co-op (OREC) said four of its projects—rooftop solar arrays on Mer Bleue High School in Orléans and Paul Desmarais High School in Stittsville, and two ground-mounted installations in the city’s west end—would be affected, along with 22 others in the Ottawa area. (Disclosure: The Energy Mix publisher Mitchell Beer is a proud member of OREC.)

“This is the province undermining efforts of municipalities, of Indigenous communities, of community groups such as ours, who’ve been working toward developing renewable energy projects in their own communities and elsewhere in the province,” said [4] spokesperson Aaron Thornell. “We don’t really see how the cancellation of these renewable energy projects can save ratepayers’ money. We actually feel that this is nothing really more than a waste of time and money and people’s energy.”

Ecology Ottawa Executive Director Robb Barnes called the announcement “policy by sledgehammer”, adding that “the rapidity with which the province is trying to dismantle anything related to green energy or action on climate change really throws the industry into turmoil.” The result: “Investors are going to go elsewhere. They’re going to go to jurisdictions like California that are moving ahead with green jobs.”

Ottawa also learned [5] earlier this month that the Ontario Municipal Commuter Cycling Program, run by the provincial Ministry of Transportation, had been cancelled. That means the $9.7 million the city’s bike lane network received from Queen’s Park in March will be the last provincial funding it sees for the foreseeable future.

“Without provincial support (and at this time an alternative funding program hasn’t been announced), the city will continue to implement its cycling program, but not at the aggressive pace of the past few years,” Vivi Chi, Ottawa’s director of transportation planning, said in a statement.

Ontario is also cancelling [6] alternative vehicle rebates of up to $14,000 as of September 10 for cars that were delivered, registered, and plated through a dealer—and immediately for hydrogen vehicles, or EVs like the Tesla, that were ordered directly from the manufacturer. “As Tesla does not have dealers and their cars are sold directly to consumers, some Tesla customers say they feel like they’ve been unfairly targeted,” CBC reports, in a story that highlights one buyer who saved up for his “dream car” and put down his non-refundable deposit for a Tesla Model 3 on June 6, the day before the provincial election.

“The way it was done is unfair and is leaving many Ontario families in a bad place,” said Matthew Cheung, whose dad is now $14,000 short. “The government broke the promise, and in a way that especially singled out a single manufacturer.”

“I am devastated by the reversal of what has been communicated to us,” agreed Model 3 buyer Kurtis Evans, noting Ford had promised an “orderly wind-down” of programs funded with cap-and-trade revenue. “The loss of the rebate is going to have an impact on our lives, and will put a greater strain on my family.”

While Ford and his cabinet move to undermine safe energy sources that will be a cornerstone of Ontario’s future, they’re showing no such reticence about the dangerous sources that belong in its past. In Toronto’s NOW Magazine, Ontario Clean Air Alliance Director Angela Bischoff reported [5]that Ontario Power Generation is pressing ahead with its request to extend the operating life of its Pickering nuclear station—even though the facility is already storing a mind-bending 740,000 waste fuel bundles containing radioactive isotopes, the product of the plant’s 50 years of operation, with no clear idea of where the waste will go.

“While concerns over safety and emergency preparedness dominated the submissions of critics, OPG’s plans for nuclear waste fuel bundles already being stored at the Pickering site has received comparatively little attention,” Bischoff wrote. But “this is not some benign waste product. The bundles contain materials that can release radioactive isotopes that can penetrate the human body. They also contain an enormous amount of plutonium, enough to construct more than 11,000 nuclear warheads.”

Greenpeace Canada Senior Energy Analyst Shawn-Patrick Stensil “likened OPG’s application to a request ‘to expose millions of people within the (Greater Toronto Area) to the possibility of a nuclear accident,’” Bischoff added.

After a continuing search for a “willing host” community to accept devices that will remain radioactive for thousands of years, “the biggest problem is that there is absolutely nowhere for this waste to go,” opening up a whole new line of questioning about Ford’s avid interest [7] in keeping the Pickering plant open.

“While OPG is planning to expand its conventional storage facilities so that Pickering can continue to operate well beyond 2024, it has no plans to build concrete-reinforced, attack-resistant vaults aboveground, as environmentalists are recommending, to protect Pickering’s waste,” Bischoff warned.