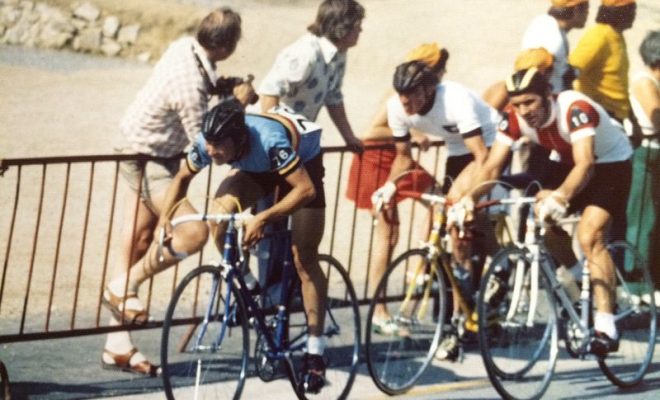 Close analysis of archived TV footage from an annual cycling race in Belgium has confirmed a strong connection between a warming planet and the ever-earlier emergence of trees from their dormant winter state, reports the CBC.

While taking a look at video from the 1980 Liège–Bastogne–Liège, an annual road cycling race that takes place in Belgium for a day each April, competitive cyclist, botanist, and climate scientist Pieter De Frenne was struck by the fact that 38 years ago, the trees—unlike today—were still leafless.

Fascinated, “he turned to the most regular of the races: the Tour of Flanders, an annual race that takes place in early April that had television coverage going back for decades,” to try to quantify this apparent arboreal indicator of climate change.

Sifting through more than 200 hours of TV coverage between 1981 and 2016, De Frenne and his team “selected 12 climbs and landmarks where they could pinpoint individual trees,” explains the CBC. Studying “46 trees in particular,” most of which “were not native to the area,” the researchers discovered that while they were virtually leafless in the 1980s, many “were already in full leaf” from 1990 on. The researchers published their results in journal Methods in Ecology and Evolution.

“The change was significant,” states CBC, with leaf emergence measurable on 45% of the trees over the last 10 years of the study. “The shifts also corresponded with climate data that showed temperatures in the area rose by 1.5°C since 1980.”

While humans may relish the early retreat of winter, writes the CBC’s Nicole Mortillaro, such changes can devastate the fragile choreographies of species interdependence: for example, between migratory birds and critical insect food supplies at breeding sites.

University of Toronto research associate Alemu Gonsamo, who was not involved with the study, noted that “there are other consequences that scientists are trying to better understand,” including the impact of a longer growing season which will find trees taking in more atmospheric carbon.

“While having more carbon uptake may seem like a positive in a rapidly warming world,” Gonsamo said, the accelerated uptake “will cause the soil to dry out” and cause more decomposition, which will in turn lead to higher levels of carbon release. “It’s unknown what the long-term, large-scale effects will be,” CBC notes.

Interviewed by the National Geographic, University of British Columbia ecologist Elizabeth Wolkovich celebrated [2] the findings and expressed hope that the technique of using TV footage will be taken further. “One of the most important things to learn,” she said, “is how plants behaved before warming really took off.” The Tour of Flanders footage actually goes back to 1929—albeit in grainy, black-and-white images. Noting the dearth of data on such shifts in the alpine regions of the world, Wolkovich suggested researchers “have a look at the Tour de France, or the Giro de Italia, or some of the other cycling races that reach the thin air of the high mountains.”

“It’s unfortunate that we don’t have a cycling race in the summer where the Iditarod [3] is held [4],” she added. “Because the Arctic is the place where we have the most extreme warming, but also effectively have the least data.”