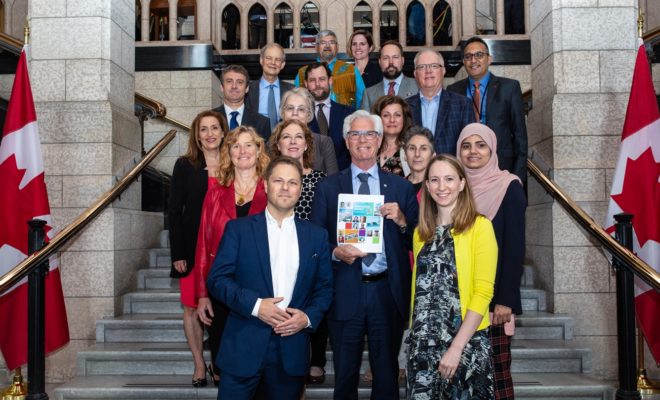 “It’s not so much a blueprint as it is the North Star,” Carr said [1] last week, as he released the report of the Generation Energy advisory council. “It’s aspirational, this is where we want to be. And now, it’s up to all of us to determine how to get there.”

The path laid out in the report “points not only to developing more wind and solar power, but also to the environmental and economic benefits of Canada producing, shipping, and burning oil and natural gas that is cleaner and more cost-efficient,” The Canadian Press reports. “The minister says oil and gas will be part of the energy mix for a long time, and Canada’s long-term goal is to become the world’s cleanest producer of liquefied natural gas, which can then displace dirtier sources of electricity around the world.”

The report is receiving mixed reviews from different corners of the climate and energy community.

“A global energy transition is under way, and this new vision paints a picture for how Canada can navigate this change to the benefit of all Canadians,” writes Clean Energy Canada Executive Director and advisory council Co-Chair Merran Smith. “For the first time ever, Canada has aligned its energy vision with its commitment to tackle climate change,” and that’s “an important moment for Canada.”

“This vision acknowledges where we’ve come from, while also accepting the inevitability and opportunity of where we need to go,” Smith adds. “If we follow the pathways laid out in this report, Canada can succeed in ensuring that Canadians have access to affordable, reliable, clean energy, and that we can sell our solutions to the world.”

Advisory council member Julia Langer, CEO of The Atmospheric Fund, notes [3] that the report lays out four pathways: wasting less energy, switching to clean power, using more renewable fuels, and producing cleaner oil and gas. “In a generation, there will still be requirements for liquid and gas fuels, which we can offset by boosting the use of renewable fuels,” she writes. But “the transition to a low-carbon economy won’t happen overnight and, although significantly reduced, fossil fuels will be part of our energy mix in a generation.”

So “steps to shrink the carbon footprint of oil and gas production, including reducing methane leakage, more energy-efficient processes, and technological innovation form a key part of the Generation Energy strategy.”

But Greenpeace Canada warns [4] that Generation Energy was “proposed, designed, and shaped” by “oil industry insiders”, listing four fossil and pipeline advocates who were advising Carr for months before the process was unveiled.

“This is an industry whose front group [5] is currently attacking carbon pricing and climate policy in Canada [6],” Greenpeace states. “Adding insult to injury, oil insiders were able to shape the Generation Energy process to give political cover to the expansion of oil and gas production (and not incidentally, the pipelines that enable this expansion).”

Sounds as if Carr is getting bad advice. There is nothing ‘clean’ about LNG obtained by fracking. This is fossil industry B.S.