Canada and the other five G7 leaders effectively isolated Donald Trump on the crucial issue of international climate action during the G7 Heads of State Summit in Charlevoix, Quebec June 8-9, Climate Action Network-Canada is declaring in a post-summit analysis.

“Canada stood its ground as president of the G7 and showed that…Donald Trump is profoundly alone on the world stage,” CAN-Rac Executive Director Catherine Abreu said in a release. “The other G7 leaders presented a united front to Trump, confirming that his administration’s position on climate change leaves the United States isolated from its peers.”

In their final communiqué, the leaders of Canada, France, Germany, Italy, Japan, the United Kingdom, and the European Union “reaffirm their strong commitment to implement the Paris Agreement, through ambitious climate action; in particular through reducing emissions while stimulating innovation, enhancing adaptive capacity, strengthening and financing resilience and reducing vulnerability; as well as ensuring a just transition, including increasing efforts to mobilize climate finance from a wide variety of sources,” according to the official statement. 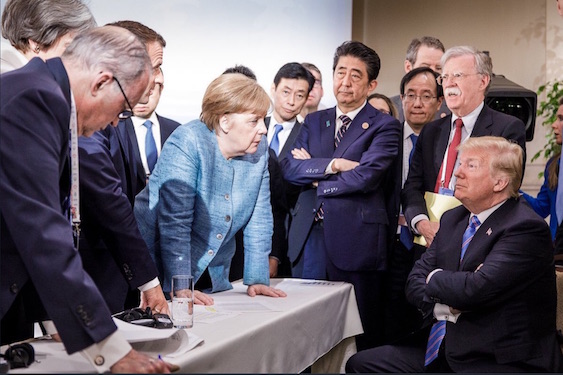 “We discussed the key role of energy transitions through the development of market based clean energy technologies and the importance of carbon pricing, technology collaboration and innovation to continue advancing economic growth and protect the environment as part of sustainable, resilient and low-carbon energy systems; as well as financing adaptive capacity,” the leaders added. “We reaffirm the commitment that we have made to our citizens to reduce air and water pollution and our greenhouse gas emissions to reach a global carbon-neutral economy over the course of the second half of the century.”

Although Trump quickly blew up the intricately-crafted consensus statement from a summit focused mainly in international trade—and left the meeting early rather than attending Saturday sessions on climate change, oceans, and gender equality—the grown-ups in the room did what they had to do on climate.

“Every country other than the U.S. recognized the need for urgent action to limit the rise in global temperatures, and to ensure a future that is safe, clean, and pollution-free,” Abreu said. “It is clearer than ever that the rest of the world is determined to keep collaborating on key issues such as climate change, in spite of the Trump administration’s attempts to derail multilateral cooperation.”

After last year’s G7 meeting “broadly reaffirmed” the need for climate action, she added, this year’s final communiqué “includes clear commitments to decarbonization, strengthening the Paris Agreement, the importance of carbon pricing and shifting financial flows, as well as delivering financial support to developing countries living with the impacts of climate change. Meanwhile, the Trump administration stood alone in defending fossil fuel interests rather than supporting the decarbonization of the global economy.”

Greenpeace International Executive Director Jennifer Morgan agreed in a release that “the joint commitment to climate action forged in Paris remains at the top of the geopolitical agenda despite the U.S. administration’s repeated attempts to demolish it..” However, “the ambition and resolve shown today by some leaders must now result in real, committed action to address the shared climate threat.”

“Only through multilateral action that boldly accelerates the clean energy transition, provides jobs, and eradicates poverty can we meet the magnitude of the challenges ahead,” Morgan added. “The Trump administration put the health of the planet at risk and is betting against markets, investors, and the action of millions of American sub-national and non-state actors.” Which means that “G6 leaders now have to demonstrate their commitment in practice.”

“Trump’s wrecking ball approach to international diplomacy left him utterly isolated at the G7 summit,” said Alden Meyer, director of strategy and policy at the Union of Concerned Scientists. “Leaders from the other six countries didn’t even try to paper over their strong disagreements with Trump on trade, climate change, and other important issues.”

“On climate change, they made clear their determination to meet their national commitments under the Paris Agreement, and to continue efforts to decarbonize the global economy,” Meyer added. ““They are joined by thousands of U.S. mayors, governors, business leaders, and others who are moving forward with ambitious climate action and pursuing the tremendous economic development and job creation benefits that clean energy technologies provide.”

“The majority of the world is forging ahead to meet the goals of the Paris Agreement, and this leadership is not only coming from governments,” added Unilever CEO Paul Polman. “Companies around the world—including those in the United States—are rapidly aligning their business strategies with the Paris Agreement to build a just transition to net-zero emissions by 2050 that protects people, reduces risk, and drives economic growth.”

CAN-Rac’s Abreu said Canada “showed leadership by stickhandling this climate outcome as the G7 host”—although, “to be a true climate leader, Prime Minister Trudeau will need to change his approach to fossil fuel infrastructure at home, and fulfil his commitment to reconciliation with Indigenous peoples.”

In a Toronto Star op ed leading up to the summit, Abreu warned that Trudeau had put his reputation for climate leadership at serious risk with the decision to buy out the Kinder Morgan pipeline—and at the G7, nothing less than “tangible action” would be needed to restore some of his earlier momentum on the issue.

An analysis for CBC Saturday morning echoed the “mounting pressure” Trudeau faced to “deliver a solid commitment on climate change”, at the G7 and at home.

“In this atmosphere of polarization and nationalism, Canada is uniquely positioned to convene international players for action on climate change and clean growth,” wrote Memorial University grad student and COP 18 youth delegate Perla Hernandez. But “climate experts like Italy’s lead climate negotiator, Luca Bergamaschi, see the Trans Mountain pipeline buyout as evidence Europe will have to carry the ball on climate. Canada’s actions on its own soil will be viewed as evidence of its commitment to climate change, or lack thereof.”