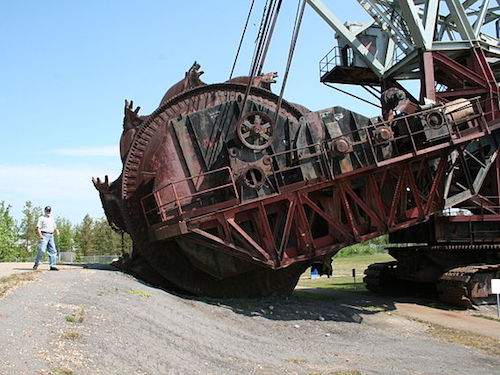 Even when it sets out to fund clean technology, the Canadian government can’t seem to leave behind its default commitment to boosting the country’s fossil industry. After Innovation Minister Navdeep Bains announced C$26.3 million in new cleantech funding last week, a sharp-eyed Energy Mix reader pointed out that one of the largest single investments was destined to support a new tar sands/oil sands production process.

When Bains made his announcement, just 24 hours after Finance Minister Bill Morneau confirmed the government’s decision to buy the Kinder Morgan pipeline, The Mix pointed out [1] that Ottawa’s cleantech generosity amounted to just 0.58% of the pipeline’s $4.5-billion purchase price (construction and risk management extra [2]). But Patrick DeRochie of Toronto-based Environmental Defence noted that the $10 million to Calgary-based MEG Energy Corporation fell outside the definition that most people attach to cleantech.

“It’s nice to see that the federal government is investing in clean technology, but it shouldn’t be using public money to make a dirty product a little bit less dirty,” DeRochie told The Mix. “Fossil fuel companies can either clean up their act on their own dime or accept the fact that low-carbon alternatives already cost less and make more sense for the economy and the environment.”

He added that “just because a fossil fuel subsidy is dressed up as an investment in clean tech doesn’t mean this isn’t public money going to carbon polluters. It works against the federal commitment to climate action and carbon pricing. It’s like putting a tax on cigarettes, and then giving money to tobacco companies to produce more cigarettes.”

Bains spokesperson Karl Sasseville responded by email that Sustainable Development Technology Canada “funds projects that will provide significant economic and environmental benefit to Canadians. SDTC conducts a rigorous screening process and ongoing evaluations on every project, oil sands or otherwise. MEG Energy Corporation (MEG) is an Alberta company that is demonstrating a new technology that will reduce GHG emissions and water consumption related to in situ bitumen production at a lower cost than existing technologies.”

In his speech last Wednesday, Bains stated that “just like yesterday’s announcement on the Trans Mountain pipeline expansion project, today’s announcement on clean technology is yet another demonstration that the economy and the environment go hand in hand. That has always been our government’s vision, and it remains the case today.” He added: “I can’t wait to see the discoveries these companies advance and the work they do in the field of clean technology.”

Yes, in situ bitumen production saves water. That’s because it uses SOLVENTS to extract the bitumen. Solvents are often very bad for health. And from what I read, the Feds are not requiring in situ bitumen mining to have Environmental Assessments. Sounds scary to me.

Canadians aren’t fooled — & neither should the Trudeau govt. be: Lower cost DOESN’T mean lower emissions! Our Govt. needs to listen to the scientists & its people (2/3 of whom OPPOSE funding unsustainable new fossil fuel projects) & SPEND OUR MONEY IN CLEAN-ENERGY DEVELOPMENT.. Make polluters pay for making a less livable future for our kids!

Canadians have been fooled. The proof is in the pudding. Canadians elected a government that talks out of both sides of its face. On one side it shuts down Canadian energy projects that are designed to the highest environmental standards available (mostly developed right here by experts in clean-tech), then on the other side it allows the import of oil from countries with no environmental standards. The government needs to do a complete 180 on its energy portfolio. Promote Canadian energy because Canadians demand accountability from oil companies that operate here and they get it. There is no other place on the face of the planet with higher environmental standards than the ones we have. Until there is a new energy available to Canadians the government must put our own resources and people first. Once other countries raise their standards to our level then we can talk about reducing our projects. We are the leaders in accountability but this government is turning a blind eye to decades of research and innovation by denying pipelines that support Canadians.

Well, check out our story Monday on the diplomatic spat between Canada and Saudi Arabia. But also, ask yourself this — is Canada’s fossil production really so much more “accountable” when regulators at all levels turn a blind eye to the ecosystem, species, and health impacts it produces? And even if those problems could be solved, does it really matter how “accountable” we are if we’re accounting for accelerated extraction and export of a product that fries the atmosphere when used as directed?