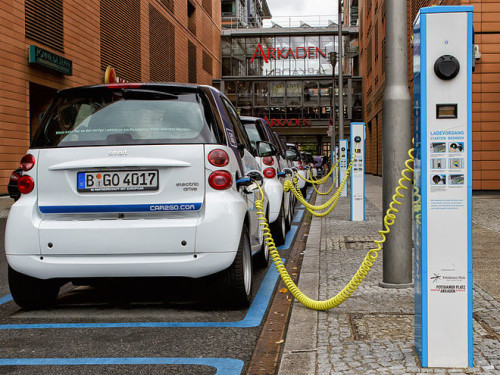 The global electric vehicle fleet is on track to triple between 2017 and 2020, from 3.7 to 13 million, then grow by an average 24% per year through 2030, the International Energy Agency reported this week.

That pace of compound growth would represent a doubling [1] in roughly three years, and a quadrupling in about six.

“The dynamic policy developments that are characterizing the electric car market are expected to mobilize investments in battery production, facilitating cost reductions and ensuring that battery production takes place at scales that exceed significantly what has been seen so far,” said Senior Energy and Transport Analyst Pierpaolo Cazzola.

Bloomberg says the study results “illustrate the speed at which the world’s transportation system is shifting toward cleaner fuels as governments focus on limiting pollution and greenhouse gases.”

The IEA foresees China retaining its world lead among EV markets, with volume increasing from 2.2% of all sales today to just over 25% in 2030 as “part of an effort to cut air pollution in smog-choked cities,” Bloomberg notes. The normally staid agency sees the 130 million light-duty EVs on the roads in that year displacing 2.57 million barrels of oil per day—about as much as Germany consumes today, and somewhat more than the 2.23 million barrels per day that Bloomberg New Energy Finance projected [3] in a report last week. That study anticipated EVs hitting cost parity with gasoline and diesel vehicles by about 2024 and wiping out 7.3 million barrels per day of oil demand by 2040, equivalent to the oil output from Iran and Iraq.

The IEA sees governments losing US$42 to $92 billion in fuel tax revenues through 2030 as drivers shift to EVs, and echoes BNEF’s conclusion that world-wide use of electric buses is set to surge—from 370,000 last year to 1.5 million in 2030, the agency says. The skyrocketing demand will create the need for at least 10 new battery gigafactories, and set global cobalt and lithium demand on track for rapid growth.

In a separate study, the U.S. Department of Energy’s Lawrence Berkeley National Laboratory pointed to EVs’ potential as a “vital asset” to help California utilities bring more renewable electricity online. “Scheduling electric vehicles to charge in the middle of the day rather than the evening would help balance the grid by storing surpluses of electricity that would otherwise need to be curtailed,” Greentech Media reports [4]. The strategy would save grid operators the $1.45 to $1.75 billion they would otherwise have to spend to bring an extra gigawatt of storage online.

Last week, an analysis by Oxford-based Aurora Energy Research Ltd. foresaw [5] a global fleet of 540 million EVs by 2040, with the combination of EVs and increasing fuel efficiency driving oil demand to peak in the mid-2020s and fossils to lose $19 trillion in income by 2040.