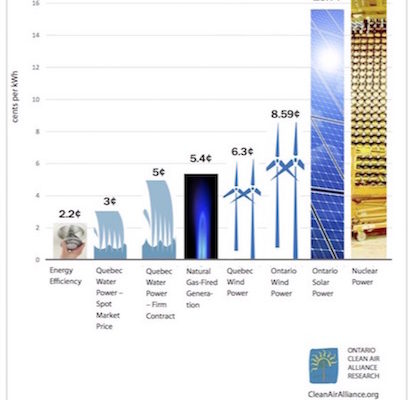 Two of the four main parties in the Ontario provincial election are missing the opportunity to attack rising electricity costs by shutting down the Pickering nuclear station on schedule in August, the Ontario Clean Air Alliance (OCAA) argues in a Hamilton Spectator op ed.

“If provincial party leaders get their campaign pronouncements right, the next government at Queen’s Park will have a real shot at bringing electricity costs under control, with a least-cost energy strategy that saves ratepayers C$1.1 billion per year,” asserts Outreach Director Angela Bischoff. So far, NDP leader Andrea Horwath and Green leader Mike Schreiner have both embraced the opportunity.

But politically, the various parties’ responses to OCAA’s exhortations on a least-cost energy strategy have defied conventional wisdom. So far, “the party leader trying to claim the mantle of fiscal responsibility is going all-in [2] on an unnecessary, multi-billion-dollar nuclear boondoggle,” Bischoff writes. “It’s the New Democrats and Greens—the two parties Doug Ford is scrambling to push back—that are advocating for a cost-effective strategy that involves closing the Pickering nuclear plant on schedule and replacing its expensive electricity with low-cost power imports from Quebec.”

It’s a position the Alliance began putting forward since 2014, with a report that calculated costs of 2.2¢/kWh for energy efficiency 3.0 to 5.0¢/kWh for hydropower imports from Quebec, 5.4¢ for natural gas, 6.3 to 8.59¢ for wind, and 15.7¢ for solar. (And as The Mix noted earlier this week, those figures predate the cost reductions that have swept the wind and solar industries over the last 3½ years.)

With those numbers as a backdrop, “it’s inexplicable and sad to see Liberal leader Kathleen Wynne following Ford’s lead after her government opened the door to a long-term power purchase from Quebec. But stranger still is Ford’s apparent disinterest in lower-cost alternatives to propping up one of North America’s oldest nuclear stations,” Bischoff writes.

“With the highest operating costs in North America, Pickering has played a major role in driving up electricity rates and triggering high hydro bills as an election issue. Ford likes to tout his business experience as a qualification for the premier’s chair, but if this is the level of judgment and analysis he’ll bring to Queen’s Park, we should all be afraid, very afraid.”

[…] hydroelectricity to neighbouring jurisdictions. For Ontario, where civil society analysts have long advocated hydro imports as a more affordable alternative to costly nuclear refurbishments, the premier […]

[…] for only 12% of the adjustment charge. Ahead of the June, 2018 provincial election, the Alliance urged Ontario political parties to commit to a least-cost energy strategy by maximizing energy […]