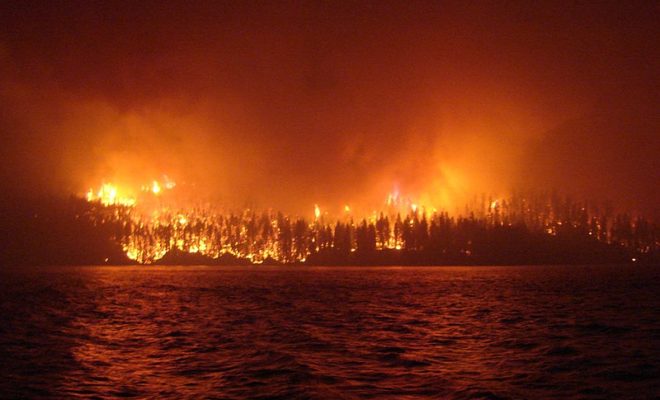 British Columbia is launching a mental health program for victims of its horrific 2017 wildfire season, just as the first major blazes of 2018 have firefighters gearing up for another windy, dry summer, according to back-to-back reports this week on CBC.

“Firefighters in British Columbia are preparing for more challenging conditions early this week, as windy, hot, and dry weather could fuel the flames of three large wildfires” at Allie Lake, Xusum Creek and Tommy Lakes, The Canadian Press reported in a May 28 dispatch. And meanwhile, “the B.C. government in collaboration with several partners has announced a new program to provide mental health supports for those impacted by last year’s record-breaking wildfire season,” CBC noted in a separate story [1] published the same day.

“Natural disasters can cause significant stress, and can lead to unexpected mental health impacts,” said Mental Health and Addictions Minister Judy Darcy. “That’s why it is critically important that people are familiar with the mental health supports and services in place to help them along their healing journey.”

Julia Payson, executive director of the Vernon, B.C. branch of the Canadian Mental Health Association, said the new program is timed to support evacuees from last year’s fires whose memories are triggered by this year’s events.

“People who went through the displacements last year may be affected by the new fires, or seeing the new fires, and the symptoms that they’ve been dealing with may become more acute,” she told CBC. “If [the stress] keeps going and is going longer than a couple of weeks, or if it’s been 10 months and you’re still experiencing this, you really do deserve to get the support that’s out there for you to help you heal from this.”

CP carried photos and updates from each of the three current fires, as well as a fourth incident in West Kelowna that officials deemed suspicious and were investigating.