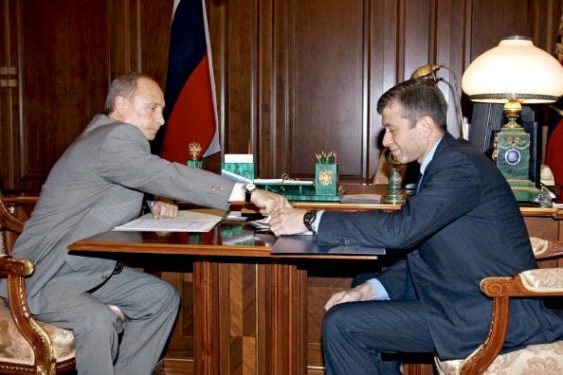 As Justin Trudeau’s federal Liberals draw ever closer to obligating all Canadian taxpayers to appease Alberta and subsidize the proposed Trans Mountain pipeline, they would be wise to look long and hard before they leap. There are surprises lurking which should scare off any sensible investor.

For starters, Kinder Morgan has signed a contract for 75% of the pipeline segments to be produced by a company controlled by Russian billionaires recently put on the U.S. list of oligarchs tied to Vladimir Putin. The richest of those is the biggest shareholder of the global coal and steel giant, Evraz Group SA., and has donated a $25-million yacht to his longtime ally, Vladimir Putin. Evraz owns the Regina plant slated to make most of the pipe for the Trans Mountain pipeline.

Roman Abramovich and his billionaire business partners Aleksandr Abramov, Aleksandr Frolov, and Russian-American businessman Eugene Shvidler go back decades, to the last tumultuous years of the Yeltsin-era Soviet Union, when Abramovich mysteriously rocketed from a Siberian orphan, to an obscure rubber duck and doll supplier, to an oil and mining oligarch.

Now they hold 63% of the voting shares of Luxembourg-registered Evraz Group, which owns coal and nickel mines, steel mills, and related manufacturing plants from Siberia to Saskatchewan. Their pending plan is to have the Evraz plant in Regina be a major pipeline supplier for both the Trans Mountain and Keystone XL projects. Kinder Morgan has provisionally assigned an order for 250,000 tonnes of steel, which equates to 800 kilometres of Trans Mountain pipeline. The Keystone XL pipeline contracts call for Evraz Regina to supply 24% (equivalent to the Canadian land portion) of that pipeline order.

If Justin Trudeau engineers an eleventh-hour financial bailout for the Trans Mountain pipeline project before June 1, Evraz and its Russian oligarch owners will suddenly become partners with all Canadian taxpayers. They will be investing in and building the pipeline together. So what kind of partners might they prove to be?

In 2005, Evraz Group purchased a 40% share in a Siberian coal mine which supplied an affiliated steelmaking complex. In 2007, an explosion traced to an underground area where there were no methane detectors killed 107 mine workers. It was the worst mine disaster in Russia in a decade.

Three years later, methane explosions at the same Siberian coal mine killed 90 more, including underground workers and those attempting to rescue them. A former Russian government deputy minister for energy, Vladimir Milov, told the broadcaster Radio Free Europe: “It seems to me those enterprises owned by Evraz, which is under the control of Abramovich and Abramov, seem to systematically have accidents. There is a reason to ask the bosses of Evraz what is going on with safety in their mines.”

There is no indication the Evraz plant in Regina is an industry bad actor. In fact, Roman Abramovich and his oligarch partners approved modernizing it with a $200-million cash infusion. The company also maintains the pipe for the Trans Mountain project will be derived from recycled Canadian steel. It is a union shop, represented by the United Steelworkers. Winning the order from Kinder Morgan to make 75% of a pipeline that will stretch from central Alberta to Vancouver amounts to a miracle for the community. There will be hard times, and outrage in Saskatchewan, if it falls through. No pipeline opponent should celebrate if it does.

But even if that new steel pipeline could meet the highest current standards for strength and safety, there is no guarantee that among many thousands of welds, a few won’t fail in the next half-century. Age is an implacable enemy, as the Canadian company Enbridge learned with the rupture of a 41-year-old oil pipeline it was using to deliver diluted bitumen near Kalamazoo, Michigan. The 2010 spill took years and cost billions to clean up. Enbridge paid record EPA penalties and other damages.

Diluted bitumen from Alberta contains especially corrosive chemicals which may in time eat through otherwise adequate oil pipeline walls, sometime, somewhere. Pipe forged from recycled steel may prove especially vulnerable, due to metallurgical variations and impurities stemming from past uses. The provenance and chemistry of each tonne of such pipeline steel must pass especially stringent tests.

Moreover, because Canada has formally agreed to reduce national greenhouse gas emissions under the 2015 Paris Agreement, the Trudeau Cabinet should be assigning independent due diligence experts, not only audit whether increased Alberta bitumen exports (via Trans Mountain) can comply with our Paris pledge, but to assess whether pending partners like Evraz are carbon reduction exemplars, or outlaws.

In fact, the 2017 Evraz annual corporate report boasts about ramping up production at the vast coking coal deposits in Siberia where the two major methane explosions claimed almost 200 lives. It is the leading Russian producer of coking coal, supplying both affiliated steel mills and exports to countries like China, South Korea, Vietnam, Indonesia, and Ukraine. Last year it produced 23.3 million tonnes of coking coal, up 4.7% from the previous year.

Total Evraz operational greenhouse gas emissions (not including emissions by its coal customers in other countries) were a reported 40 million tonnes last year. So Evraz is accelerating coal mining when the world’s scientists—and Canada’s environment and climate change minister—are warning it should be sharply curtailed, and exporting more and more coal to countries with some of the most lax emissions standards. It also reported gross revenues of US$2.2 billion, (a 67% increase from 2016), and a profit margin of 55%.

As Kinder Morgan’s ultimatum and deadline of May 31 approach, the Trudeau government needs to exhibit more investor probity and less political panic, stop nation-shaming B.C. Premier John Horgan for commissioning scientific studies on potential marine spills, respect its promise of reconciliation with First Nations, and ask climate scientists— not scripted soothsayers—if accelerating bitumen exports by up to 40% is compatible with Canada’s Paris pledge.

And it should enlist impartial due diligence experts to conduct a deep dive into the oligarchs like Roman Abramovich, and the companies like Evraz, that Canada plans to soon partner with. Those findings should be reported to Parliament before all Canadian taxpayers are forced to finance such high-risk, low-standard folly.