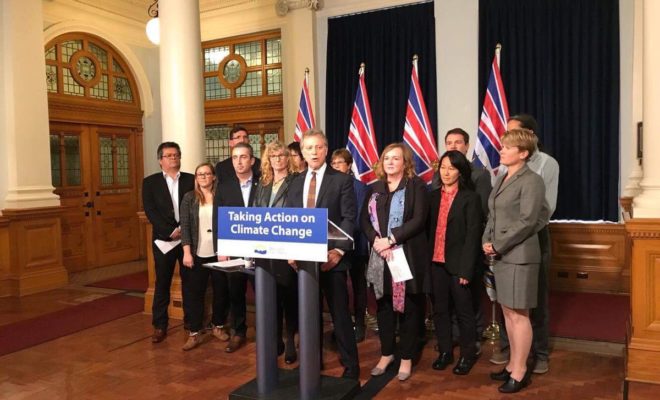 British Columbia is committing to reduce its greenhouse gas emissions 40% from 2007 levels by 2030, 60% by 2040, and 80% by 2050 in legislation tabled Monday by Environment and Climate Minister George Heyman.

“We have to make steady progress,” Heyman said. “We have to tell British Columbians what our comprehensive plan is.”

That plan, to be released in the fall, “will involve reducing emissions in the transportation industry, cutting energy consumption in public, commercial, and residential buildings, and exploring new climate-friendly technologies,” The Canadian Press reports.

“I know that industry is here to work with us,” Heyman said. “We’re working with them in a way that will keep them in business, keep them providing jobs for British Columbians and meeting our climate targets.”

In a release, he added [2] that “the previous government, after stalling on sustained climate action for several years, admitted they could not meet their 2020 target,” which Heyman’s new legislation repeals. “We aim to remove barriers, and make it attractive and affordable for people, communities, and industry to move to lower-carbon alternatives. At the same time, we will grow an economy that’s stronger, cleaner, more diverse, and more resilient.”

Pembina Institute National Policy Director Josha MacNab applauded the new targets, but called the repeal of the 2020 target a “major setback” that underscores the need for a “bold climate and clean growth plan” this fall.

“To reach our mid-century target, it’s clear homes and buildings must be completely decarbonized by 2050,” MacNab said. “This is an ambitious goal requiring clarity on building regulations, significant investments in training, and support for vulnerable populations to ensure an equitable transition.”

She added that the Horgan government’s continuing interest [3] in “developing new emissions-intensive industries, such as liquefied natural gas, would make it exceptionally challenging for B.C. to make good on its climate commitments. This would also place a heavier burden on other industries to deliver the needed carbon pollution reductions. Accordingly, much more should be done to reduce carbon pollution from proposed LNG plants and associated upstream operations.”